I begin this entry with a bit of hesitation because I am spreading the word about something I'd almost like to keep to myself. Last night we attended an event hosted by a group of chef-writers who call themselves "Spinal Tapas." It was held in an industrial kitchen that is apparently owned by the same folks who run PhillyCarShare (not our favorite people, but that's an entirely different story). The idea is that people who want to make and sell food can legally do so by renting out the kitchen, located on South St near 15th, which has been certified to meet all the various health codes and such that are required by law.

We found out about this event through another food blog (Foobooz maybe?), advertised as "Food, Music & Booze Inspired by Regional Texas Barbeque." An all-inclusive, multi-course meal for $40- whats not to like? We managed to snag two tickets to the 9 PM seating- a bit late for our eating habits, but certainly manageable.

We arrived to find a brightly-lit glass-front brownstone. Greeted by several women who we later learned were the wives of the actual Spinal Tapas chefs, we took seats at the end of a cafeteria-style table covered with a black checkered "picnic table" tablecloth. We were literally sitting in the middle of the kitchen, surrounded by stoves and counterspace. The set up promoted us to make quick friends with those seated around us. Most of the attendees happened to be fellow writers from Philadelphia Weekly, so there was somewhat of a dinner-party atmosphere where everyone knows everyone else (making me feel personally lucky to be able to attend!). As the chefs finished final preparations to begin serving the food, the wives made us feel welcome by serving sweet tea (which ALMOST met my "sweet-enough" standard) and telling us more about the kitchen and the group of chefs. 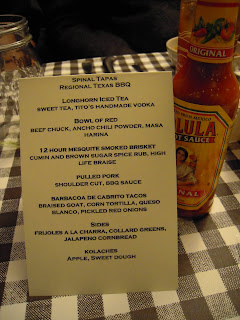 Soon, the first course was served- Texas chili. Let's just say they made a good first impression... In true Texas-style fashion, the bowl of chili was pure meat. Slow-cooked with a massive amount of spice for 8 hours, the cubed chuck fell to pieces, creating a stew that was essentially delicious meat pieces in thick meaty juice. Topped minimally with cheese and green onions, and served with sour cream (if you were "pussy" and needed to cut the spice... which I did, thank you very much), it was in every way to best chili I have ever eaten. The jalapeno cornbread was served alongside the chili, which also had a spicy kick of its own (spice will be an overriding theme of this post). A & I have a very soft spot in our hearts for cornbread; sweet, gritty, dense bread. Yum. We actually snagged a few of these to take home (yes, even when we're so full we can't even think, we want more delicious food in our future). 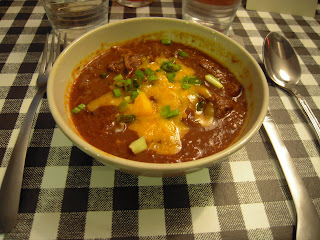 The second course was served family style- big bowls of pulled pork, collard greens, and pinto beans, as well as a platter of brisket were passed around - this turned into essentially an all-you-can-eat affair. All of this food was topped off with three variations of barbeque sauce- original, spicy, and chipotle- as well as slices of white bread for sandwich making. The pulled pork was apple-brined and hickory smoked, incredibly tasty and perfectly complemented by the barbecue sauce (I liked original best). The brisket was smoked for 12 hours, served as thick cut slices as well as a chopped fattier portion which could only be described as "melts in your mouth." The collard greens were certainly a highlight of the night- several portions of this went on my plate throughout the evening, even as I was reaching bursting-at-the-seams status. Probably due to the fact that they were 50% bacon, they were tender, just salty enough, and very rich. Even the man across the table from us, whose fiancee swore he never ate greens, gave them a try and a thumbs up. The beans were atypical as they were pinto, and stewed with peppers, with the burnt ends of the brisket stirred in as a final touch. Certainly something entirely new to my tastebuds, and they were quite pleased. 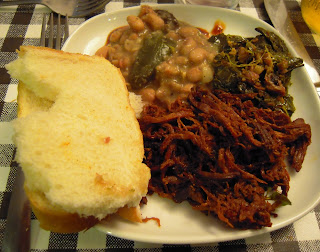 As if all this food wasn't enough, even more meat began being served- this time slow-cooked goat meat served in fresh corn tortillas (made that day!) with pickled red onion, creating an interesting twist on a taco. This meat also had a subtle yet strong spiciness and a heartier, gamier flavor. A big scoop of cool and creamy guacamole made this an incredible eating experience that I will remember for quite some time. I wish I had had room for more than one... 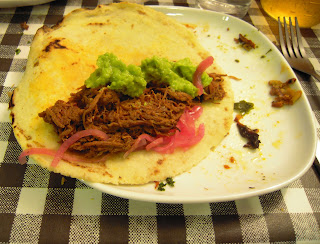 Because dessert is essentially necessary to my survival, I was happy to end the meal with a Texas-style sweet. Called "kolaches," these dense pastry buns were topped with cinnamony apple delight. Like a less sweet, compact version of a cinnamon bun, this dessert was happily tucked into my dessert pouch (yes, I have an extra stomach solely for dessert storage, which was useful at this time). 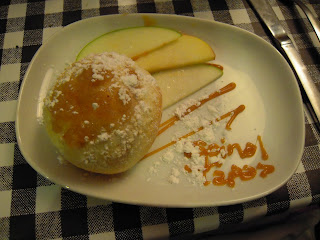 Even though it took me almost 24 hours to recover from the inevitable food coma, I was altogether very impressed with this group of chefs and their inspiration for, and production of, this meal. The food was superb, the atmosphere enjoyable, and the event was most certainly deemed a success. I am definitely looking forward to info about the next event that they will be hosting- so don't steal my seat!!