Our love of Indian food began in college, with the conveniently located and inexpensive Indian buffet New Dehli right around the corner from Penn's campus. Even though the word "buffet" can be scary, in this case it is pure deliciousness. Serving a large variety of both vegetarian and meat dishes, it's difficult to even taste everything without making several trips to the buffet. Although sometimes the flavors start to blend together (spicy & tomato based), a piece of warm, fluffy naan or a crisp samosa quickly prepares your mouth for more spiciness. We've left the restaurant more than a few times feeling borderline ill from stuffing our faces, but it is really SO worth it.

Now that we live in Center City, we don't make it out to West Philly all that often, and we haven't found any remarkable Indian restaurants near our house. We often take advantage of Saturdays to make some more time consuming and experimental recipes, and this week, we decided to try our hand at two of our favorite Indian staples: Chicken Tikka Masala and naan.

The naan was extra adventurous to make because we've never made anything that even resembles bread (well, do pancakes count?). We've recently been interested in baking our own bread, but the possibility for failure seemed high. How do you know if the dough has risen enough? How warm should the bowl be while its rising? Yeast? What's that? Seemed like a lot of unanswered questions that we didn't want to mess around with. When we decided to try to make Indian food, however, the idea of doing so without naan seemed completely absurd. So, I sucked it up and googled "naan recipe" and figured I'd give this baking thing a shot.
http://allrecipes.com/recipe/naan/detail.aspx

This recipe had few ingredients, didn't seem too time consuming, and the actual "baking" portion was short, and even better, performed on a grill! You may be wondering why this is a good thing, as we live in a small condo in a brownstone with absolutely no potential grill space to speak of. However, one of the best cooking-related purchases we have ever made has allowed us to grill in the warmth and safety of our own kitchen time after time: a grill pan. Seriously... go buy one. Right now. It is amazing. Ours is a solid cast iron version from Williams Sonoma, which sounds expensive but really didn't set us back all that much (thirty bucks?). 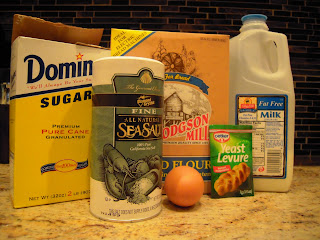 Anyway, making the naan was actually really easy. I bought some bread flour and instant yeast, and used about 25% whole wheat flour to increase the "health" factor. I mixed all the ingredients in a bowl and literally just dumped it on my countertop. Kneading bread is actually kind of fun, even though I didn't actually know what I was doing. Sort of a dough massage. 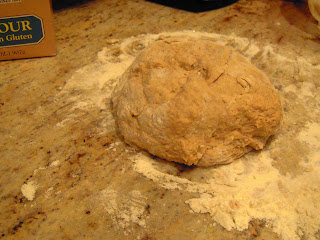 After the requisite hour of rising, I didn't really feel like it had grown all that much (I should have taken before & after pictures..). Instead of adding chopped garlic, I kneaded in a few tablespoons of ground flaxseed and garlic powder (I'm lazy!). Then I broke the dough up into tennisball size chunks, covered them as directed, and this time let them rise in the oven, which I set on 100' with the door slightly propped- this definitely helped the dough rise. 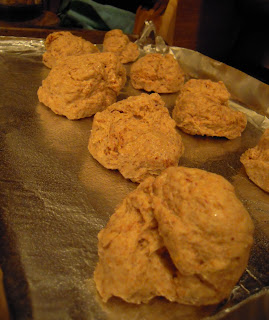 Grilling the naan was way easier than I thought- I literally just stretched out the chunks like pizza dough, placed them on the grill pan for 2 minutes, flip and repeat. Hello delicious doughy fluffy grill-marked wholewheaty NAAN. I love naan. A lot. Very excited about the frozen leftover pieces currently living in my freezer (but not for long!)...I will most definitely be making this again. It also gave me that first step in the right direction toward actual bread baking.
Note: This recipe made about 12 thick chicken breast sized pieces of naan. 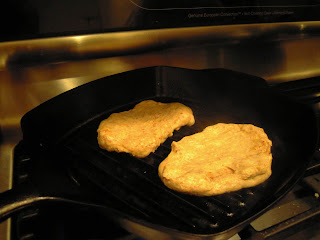 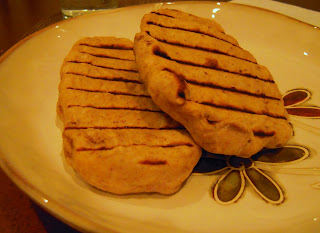 Of course, you can't make naan without making something to dip it into! Chicken tikka masala seems to be everyone's favorite Indian dish- and it's one of ours too. We decided that instead of going for the "3 months pregnant with a food baby" feeling we always have after several trips up to the buffet, we would try to lighten this Indian classic. Indian food has the innate ability to be healthy- lots of veggies, flavored with tons of spices, and filled with lean meats. However, most Indian restaurants have a heavy hand with the butter (or is it ghee...) and the cream... which makes it taste great but you'll be feeling that baby for awhile.

Our recipe was inspired by a recipe that seems to have spread around online- if you're looking for the exact recipe that we half-followed, Google "Skinny Chicken Tikka Masala." We're not sure how it is "skinny" but at least it's relatively health-conscious! The main preparation goes like this:

Combine a big can (the 28 ounce version) of tomatoes (chopped, diced, whole, it doesn't matter) in a food processor with 1/3 cup non-fat Greek yogurt, 1 tbs. ground tumeric, 1 tbs. garam masala, 1 tsp. ground ginger, 1 tsp. paprika, and 3-4 garlic cloves (or more if you are a big garlic fan). Puree the whole mess, and combine about half of the mix with 2 (or more if you're feeding more people) chicken breasts cut into chunks, placed into a Ziploc bag. Marinate (in the fridge of course) for 12-24 hours (we only marinated for 8 and it turned out fine but rumor has it that longer is better). Keep the other half of the pureed mix for later as well. 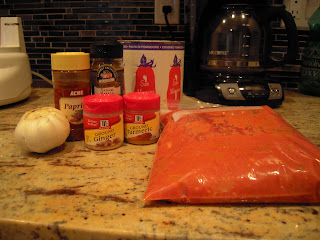 When you're getting ready to start cooking, chop an onion and a big red bell pepper. Heat some butter (don't be too generous) in a pot (we used a Dutch oven type pot), and saute the onion and bell pepper with 1 tsp. ground coriander and 1 tsp. cumin (we told you there were a lot of spices involved!). After a couple of minutes, remove the chicken pieces from the bag and add to the pot. Let them start cooking before you add the marinade from the bag- just a few minutes to start browning. Add the rest of the contents of the bag, and the remainder of the tomato-spice-yogurt mix. If you use the whole batch, the dish will be slightly soupy- we realized this a little too late and let it boil without a lid for about 15 minutes longer than needed in order to thicken it up a bit. 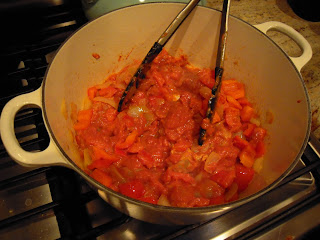 If you're running short on time, only use enough marinade/sauce to coat the veggies and chicken. Minumum cooking time suggests that it should boil for at least a few minutes to kill all those potential chicken-related bacteria and of course, cook the chicken through. On the other end of things, don't worry about over-cooking; the marinating process and the sauce keep the chicken moist and the vegetables from burning. As long as you keep on eye on it and stir it once in awhile, all will be well. Towards the end of your cooking time, add 1 cup of light coconut milk (about half of a can). This will give the dish the creamy flavor and texture that you are looking for, but with less fat and some extra health benefits.

If you didn't make your own naan like we did, you can buy it at most grocery stores. Other serving suggestions include regular pita or brown rice- you need some sort of carb to soak up all the sauce. Mmmm... Indian delight. 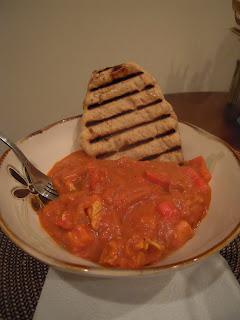