In the outskirts of Philly lies the "suburb" of Manayunk, known for its Main Street and ubiquitous twenty-somethings. I have completely recovered from my original surprise at its name- now it blends in with all of the other Native American monikers in the area. It is actually considered a Philadelphia neighborhood (with a Philadelphia address), but visiting requires a twenty minute train ride from Center City. As you may know, we aren't particularly fond of relocating that far for any old reason. However, an invite to a food-related party had us looking up train schedules in a heartbeat (post to come on this subject soon!)

Since we were making the trek to Manayunk, we decided to make it a day of shopping and exploring the area... and since the noon hour would be included, lunch was our first mission. Several restaurants and cafes in Manayunk are fairly well known by name to us, and in combination with a personal recommendation, our plan was to visit Chabaa Thai. However, since Saturday morning always means "extra hard workout" in our house, upon arriving we were in the mood for something more.. substantial.

Practically adjacent to Chabaa is the restaurant duo of Jake's and Cooper's Brick Oven Wine Bar. Jake's is a Manayunk classic, but Cooper's is its slightly newer and apparently somewhat more relaxed (ie less $$) little brother. I am still confused about the relationship between the two- are they physically connected interiorly? Clearly I was more focused on the food than on the space. We were given our choice of seats and chose a cafe table near the front window- better lighting for pictures and a good place to enjoy the sun (it's rarely seen around here recently).

The menu is a bit extensive and includes pizzas (hence the "Brick Oven"-- prominently featured in the back of the restaurant), salads, sandwiches, "plates" (like smaller entrees) and regular entrees. The menu covers a lot both in terms of food and prices- you could have lunch for anywhere between $12 (if you get the Margherita pizza or the gnocchi, for example) to $29 for the Chilean Sea Bass or crab cakes. We were both in the mood for a burger, but noticed that two fellow diners had barely been able to finish this dish together, so decided to split it.

First, we ordered a "snack"-- roasted beets ($5). We love beets as you can tell... there is just something very refreshing about their crisp flavor. Their bright color, juicy texture and purported health benefits don't hurt either! The beets were served in a small square bowl- a great presentation with crumbled goat cheese and bits of candied pecans. However, the bowl made it difficult to eat- spooning them out onto a plate caused the cheese to fall over the sides (the horror of potentially losing cheese!!!). The extra effort was worth it- the combination of flavors and textures was, while classic, very enjoyable. The goat cheese wasn't too "goaty" and helped contrast the earthy beet flavor with a salty, creamy taste. The candied nuts were almost pulverized to a powder- which was actually very much appreciated. It easily stuck to the beets for a sugary crunch in every bite. 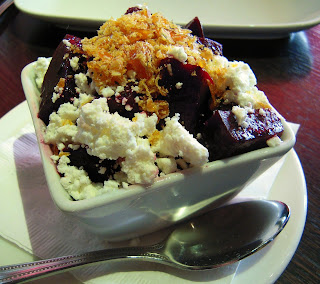 Next came the Caprese salad ($10). The originality of this dish is still surprising to me- how many takes on tomatoes, mozzarella and basil are possible? Cooper's is one that we have never seen, nor would we have ever created ourselves. The plate starts with two pools of delicious basil pesto, framing slices of fresh mozzarella sprinkled with an oil vinaigrette. These are accompanied by clumps of fresh, raw cherry tomatoes still on their vine. Atop all of this sits a frazzle of greens (the only word I can come up with to describe it!) These included what we called "clover" and that stringy green lettuce that often comes in bagged salads... sorry, I'm just not up on my alternative lettuce vocabulary (editor's note: frisee?). These greens were great for dipping into the pesto, although I would have preferred a little more substance (a better ratio of lettuce to air, if you will). The tomatoes were middle-of-summer fresh, and I'm still thinking about their acidic burst in my mouth. 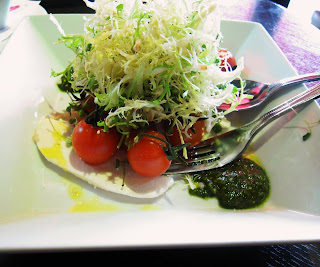 Finally, what we had walked in the door for- the burger. Labeled "Jake's Prime Burger" on the menu, the sandwich lived up to its price tag ($15). A fluffy potato bun encased a huge patty, perfectly cooked to our specified medium-rare, covered in Vermont white cheddar. Sauteed mushrooms and caramelized onions were also part of the show. It was served with a side of crisp fries and two options for sauces- regular ketchup and a horseradish-mayo combination. The burger was super moist, but was well matched by the bun, which somehow was both dense and soft. The toppings were a good combination- normally I might consider mushrooms, onions, and cheese to be somewhat of an overkill, but it didn't overwhelm the meat at all. I gave my half of the sandwich a healthy slather of the horseradish sauce- and ended up dipping my last few bites in it to maximize the flavor. It was what every horseradish sauce should aspire to be- even J, being a general objector to mayonnaise was gladly eating it. It also made a great sauce for the fries- I have recently been introduced to the mayonnaise-fry combination and the horseradish stepped it up another notch. The fries themselves were great sans sauce, being a cut large enough to include a crispy outside and soft inside (just the way I like them). They were coated in large grain salt, adding an additional crunch. The portion was reasonable for two people to split without feeling like total greaseballs. 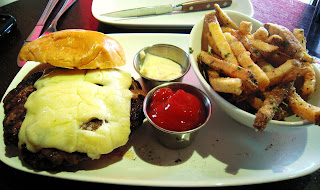 The meal was overall satisfying- a quiet, sunny spot in a new, unexplored corner of Philly that served us creative, delicious food for a reasonable price. We would normally have considered ordering "lunch dessert", but we had a full afternoon of dessert eating in front of us. Stay tuned for that adventure...