I had the tough job of picking a restaurant for my birthday dinner date with the boyfriend. I started with some criteria: I wanted to go somewhere I hadn't been before that was fairly inexpensive and somewhat romantic. Running through recently opened restaurants, I came upon Zavino- a new pizza and wine bar on one of Philly's up-and-coming "restaurant rows"- S. 13th Street. The area surrounding Zavino is chock full of awesome little places- Lolita, Bindi, Capogiro, Vintage, APO, and El Vez just to name a few (there's also quite a few fantastic little boutiques, but that's besides the point). The addition of another restaurant in the area just adds to the growing list, continuing to turn this into a hot spot in the city.

We arrived around 8 on Friday night, at the start of what would become the second big snowstorm of the season. The restaurant was still quite busy- which isn't tough seeing as the space is TINY- about as big as Village Whiskey, for those who have been there. For those who haven't, it is basically a long thin space, the left wall lined with small tables- about 6 tables that can fit 4-5 people each- and the right side containing a long bar with less than 20 seats. At the front of the restaurant is a tiny hostess stand and a charcuterie station- someone manning a deli slicer and wielding a cheese knife. At the back is the pizza oven (I've heard it's a gas oven; it's definitely not a big brick oven like the ones at Pizzeria Stella or Mama Palma's). 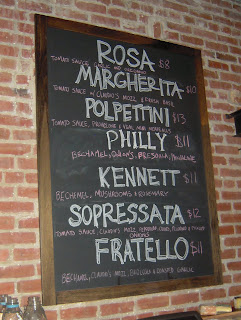 The hostess was very sweet, but delivered the bad news: it would be a two hour wait for a table or 45 minutes for seats at the bar. She added the fact that the wait was usually not that long, but on this night there were a lot of big parties with reservations (you can only make a reservation if you have a party of 5 or more). We decided to wait for the bar seats- and went back out in the snow to find a temporary distraction. Not even ten minutes later, she called us. Normally, if we had been waiting at the restaurant, this would have been great news. However, since the place is tiny and we were now comfortably settled elsewhere, it was rather annoying. I'm not sure how you can misestimate the waiting time THAT much.

We were a bit slow in returning, so of course our seats were now occupied. She assured us that it would only be ten minutes or so, which we were perfectly fine with- it still wouldn't be anywhere near 45 minutes. As we waited, we stood by a lone cafe height table next to a coat stand- really, the only place for us to wait that was out of the way. After a couple of minutes, a waiter stopped by to offer us drinks, and then brought us complimentary charcuterie-- as an apology for the "wait"! I was surprised, but of course excited- free food is always accepted here.

Two puffs of silky proscuitto (normally $6) was the perfect start to our meal- not too salty or fatty, although not exactly super flavorful. However, the texture more than made up for it. We commented that even the simple act of pulling it apart to tear off a bite was satisfying. The other two meats offered are Mortadella and Baby Jesus. Whh-hat? The couple seated next to us later on had the guts to ask about this. Apparently it is a salami-type meat, and in its full uncut form is the approximate weight and size of a newborn child. Perhaps its so heavenly tasting it was the named after Jesus?

Because I was so surprised about the free food, I missed what type of cheese we were given, but I believe it was the "Blue de Basque" ($3). It was a good portion of cheese, but came with just one skimpy piece of bread. We later realized that the bread is basically pizza with no toppings- it was passed down the bar from the pizza oven to the charcuterie station in a big circular puff, and then sliced into tiny pieces for the cheese plates. I definitely could have had a bit more of it... but hey, it was free. 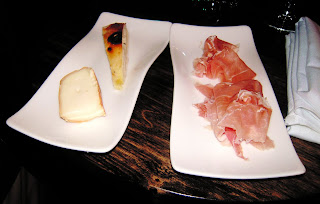 A few minutes later, we were seated at the bar looking at the menu. Thankfully for me, there aren't a ton of options (makes it easier to decide)- 5 "veggies" to choose as appetizers, and 7 types of pizza. I went with the roasted beets ($5), which came with goat cheese and pistachios. The veggie plates are also on the small side, and reminded me of what Pub & Kitchen would call a "snack" (seems to be a trend to add "snacks" to menus recently). However, the beets (both your typical red and the less common golden) were perfectly roasted. Also, instead of the crumbled goat cheese that I expected, the beets sat over a super creamy cheese sauce- thankfully not too strong on the goat flavor. It was fun to scoop the beets up with the sauce, instead of having to try to snag the beet and the cheese in one forkful. The pistachios added some good nutty flavor, but I would have preferred if they were roasted- they needed a lot more crunch factor. We went with two pizzas- I would recommend about 3/4 of a pizza per person. They aren't exactly personal sized but they are small AND thin crust so you can eat a lot without filling up. I ordered the Fratello- described as bechamel, broccoli, roasted garlic and mozzarella ($11). I usually prefer tomato sauce on my pizza, but this bechamel was a really good rendition of the white sauce- it didn't overwhelm the crust at all. J and I are both major "dough" lovers- the chewier and bigger the crust, the better. I loved the base of Zavino's pizzas- they have a great chewy texture while still maintaining that "thin crust" feel that can be hard to perfect. The bottom was dusted with flour, which is something I personally appreciate. The hot oven added big blisters to the outer rim of crust, which added good flavor without drying it out at all (I hate crispy crackery thin crusts). The one complaint I might make is about the overall flavor of the toppings- I didn't taste the garlic at all, and the broccoli, while well cooked, could have been roasted more to bring out its flavor. 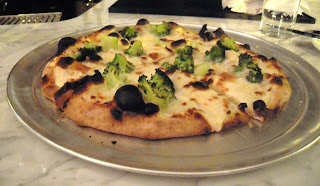 We also tried the classic Margherita ($10)- tomato sauce with mozzarella and fresh basil. The mozzarella was in those circular melty clumps that you know come from fresh balls of mozzarella (not that shredded crap that most big pizza places use). The cheese only covered a small portion of the total pizza, which I personally like (too much cheese is basically death to the crust..), and the fresh basil gave a good herby spice every time it found its way into your mouth. Overall, the pizza was very much enjoyed- reasonable prices, perfect dough, and decent toppings. Granted, we didn't exactly venture too far out in terms of originality, although the menu doesn't offer as interesting of toppings as Stella or Mama Palma's. 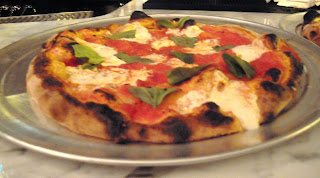 Zavino also offers a couple of desserts- a panna cotta, a biscotti, and a chocolate cake, if I remember correctly, but we decided against them. They also have some "seasonal" items, which on our visit included two seafood crudos and a lasagna, among a couple of others. It's nice to have some options if you're not in the pizza mood, but again I'm glad they don't venture too far and include too much. The bill comes tucked into a card labeled "The Damage"- which I found adorable, but even better was the fact that our damage was extremely minimal- a meal I would easily have paid over $40 for was only $28. I think this is the best deal I have ever gotten in Philly... thank you Zavino! 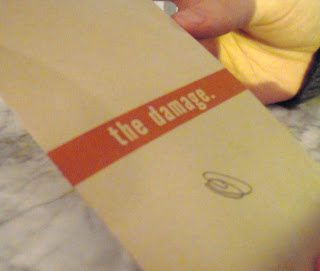 I'm sure I will be back- I have to let J experience it too, plus I feel happily obligated to give Zavino repeat business since they treated us so well. I won't even mind the potential long waits- there is so much else to do in the area while you wait (Macy's is also right around the corner!). I would also highly recommend this as a date spot- we had a great time.