A & I had a few plans for this weekend- checking out the new Paesano's, doing a little shopping for new kitchen implements, and a few other errands- but Mother Nature had other plans. With the accumulation of a foot and a half of snow, much of the city has closed down, and the trek to the Italian Market seemed fairly formidable. Stuck inside (sort of..), our alternative plan was to bake! I've been on a recent lemon kick (LemonZest Luna bars are my new favorite pre-run snack...) so A found a simple recipe for lemon squares.

Obviously we didn't have all the ingredients, so we made a quick phone call to our local produce shop (Maxx's at 20th and Manning for our Philly readers), and the super sweet Asian woman assured us with "I am here for you!" We trekked through the snow (up to my knees in some places) the two blocks to this little shop and picked up everything we needed. 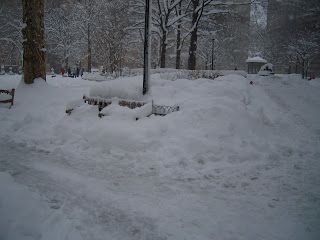 The first step in making lemon squares is making the crust. A simple combination of flour, sugar, and butter- however, this recipe's proportions seemed a little off. When we cut the butter into the flour, it was still really flour-y. Even when we molded the crust with our hands, it was more of a loose powder than a dough. So if you make this- add another half stick of butter or so! We also didn't have parchment paper, so we just greased our trusty 9x13 and hoped for the best. After pressing our "dough" into the pan (no rolling pin needed this time), we stuck it in the oven and started on the filling. 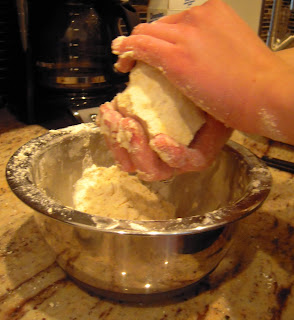 This step was also very easy. Just add the remaining ingredients in a bowl and whisk. The recipe called for concentrated lemon juice, but we used the juice of 4 lemons (use more or less to achieve your optimal lemonyness). Pop lemons in the microwave for ten to fifteen seconds and give them a good roll (sort of like a rolling pin) to maximize juice extraction. If you have a juicer, great- if not, just use a strainer to catch any wayward seeds. We also used the zest of one lemon because... it just makes it better. 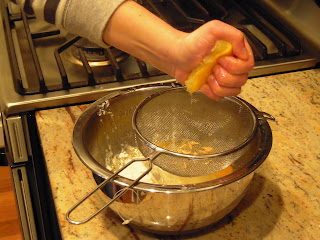 After the twenty minutes of baking, our crust looked puffy and slightly browned. We poured the filling on top and popped it back in the oven- A took this time to shovel a pathway from our backdoor to the street while I stayed inside and enjoyed the yummy baking smells. 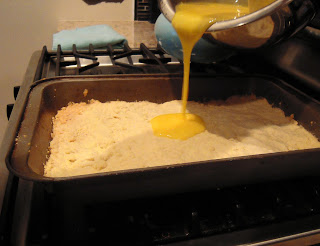 When the filling had set (~25 minutes), we pulled it out, sprinkled powdered sugar on top (keeping with the snow theme, of course) and immediately dug in. The lack of parchment paper made it a tiny bit difficult but that made the first lemony bite that much more enjoyable. The crust was like a very flaky shortbread- a thin firm layer to support the gooey upper layer. The powdered sugar on top actually helps cut the acidity of the filling, causing each bite to be a conglomeration of different tastes and textures in your mouth. It was exactly what I was in the mood for! After cutting our taste test pieces, I looked at the pan and proclaimed "lemon bars for life!"- it makes a big pan full. We covered the pan and stuck it in the fridge. Cooling for a few hours will firm them up a bit if you prefer that texture. Come to think of it, I might go check on them *cough*eat another one*cough* 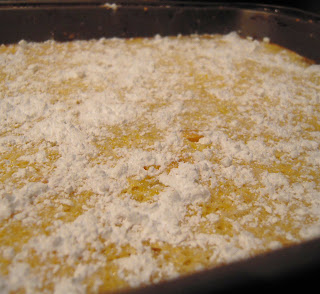 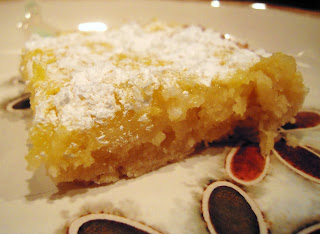