Finally! After many months, we reunite with the deliciousness that is Paesano's. J and I have been to the original Paesano's on Girard Avenue only once, but I literally dream about the experience... if I was to be featured on Food Network's "The Best Thing I Ever Ate," the only problem I would have would be deciding WHICH sandwich from Paesano's I liked better. This tiny sandwich shop (counter seating for 6-8, although most of the business is take-out) has received a LOT of recognition that has extended well outside of the city- nods in both Bon Appetit and Gourmet magazines. The menu of 10 sandwiches and a few sides is small but each sandwich is made with gourmet ingredients, amazing bread choices, and a lot of time and love. A meal tops out at $10, which is insane when charted on the Deliciousness vs. Money scale. Unfortunately, the original Paesano's (at 152 W. Girard Avenue) is not exactly.. convenient, which makes my taste buds more than a little sad. We're not big into any form of transportation that isn't walking, and the trek is a little longer than we'd like (and yes, I walk 2 miles twice a day every day to get to school and this is still too far- Google Maps tells me its 3.2 miles away).

We read in September (on Foobooz, our favorite source for restaurant and food news in Philly) that Paesano's was opening a new location in the Italian Market. Would we prefer that they moved into the little food market next door? Yes. But the Italian Market is certainly within walking distance, which satisfies us.

After a snowed out attempt, we made it the following day- a good trek through snow drifts and icy sidewalks was well worth it. We're not sure whether it is because the place just opened or whether the snow was keeping eaters indoors, but it was pretty quiet for a weekend afternoon. Instead of placing your order at the counter as you do at the original, the space is much more "restaurant-y". Only about a third of the 12 or so tables were occupied (I hope on future visits we will again escape a wait!). The space is kind of awkwardly used and the decorations leave a little to be desired, but the atmosphere was not why we were there. We sat ourselves at a sunny table, and started the tough job of making sandwich decisions. 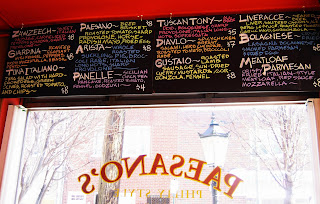 At our last visit, we tried the "Paesano," which at that time was a beef brisket sandwich topped with cole slaw, pepperoncino, and Gorgonzola, and the "Arista": shredded suckling pig, broccoli rabe, and Italian long hots. My mouth is watering typing these words. Since that time, they've changed the Paesano, leaving the beef brisket but changing the toppings to roasted tomato, horseradish mayonnaise, and fried egg. We had to try this new version to give it a comparison to the "original" and also ordered the "Daddy Wad" (great name, guys). It is a classic Italian hoagie with sharp provolone, onions, arugula, tomatoes, and sweet and hot peppers. We also decided to start with a cup of the minestrone- it's a new addition at the new location. 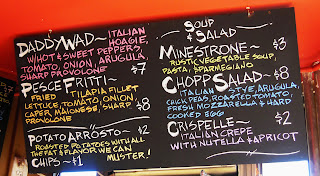 Another change is the drink selection- all of the drinks come from a self-serve soda fountain with interesting choices- RC Cola? Really? It's nice to be able to refill your glass and not have to try to ration your water through your meal- not a huge deal, but notable for us.

The soup ($3) was a good rendition of a classic- it had a very flavorful tomato base, and was filled with chunks of tomato, chickpeas, shreds of greens and pasta. A bit salty, and the broth was slightly oily (oh hi bubbles of grease) but that is probably where all the flavor was coming from! It's also served with a few slices of bread (they use Liscio's which is ironic since the new space is practically adjacent to Sarcone's) which were good for dipping but not really necessary when ordered with a sandwich. 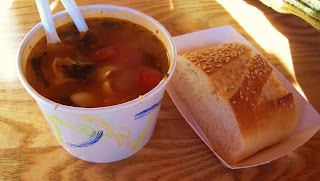 Our sandwiches only took a few more minutes, and come wrapped the same way we remembered- no "real" dishware is used in the restaurant, including plates.

They cut the sandwiches in half, which made it easy for us to share. I started with my half of the Paesano ($8). Unwrapping it was almost a feat- the whole thing was just dripping in egg yolk. For those who are a little wary of runny eggs, don't order this sandwich. Thankfully, we love them. The juice from the meat and the yolk made the bread pretty wet. If I had ordered this to go, it may have been inedible in its sandwich form after more than a few minutes. Somehow, the meat still felt a little bit dry and the salt factor was off the chart. It was also a tad spicy- it seemed like there were some small bits of hot peppers, although that's not advertised on the menu. The spiciness overwhelmed the horseradish flavor, so if I had constructed the sandwich I would have added twice as much of that. The egg was a great addition, and overall the sandwich was fantastic, but it left me wanting something else. Dear Paesano's.. please please please bring back the original "Paesano"? 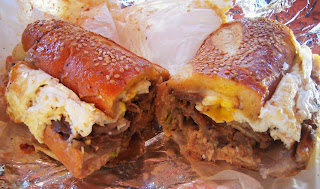 Moving on to the Daddy Wad ($7). Our dad is a huge Italian hoagie fan, and we tried this sandwich partially to make him jealous. We think it'll work. It was stuffed with delicious meats and toppings, and unlike the other sandwich was cold and not dripping wet (neither are bad things). The arugula, onions, and peppers added terrific spicy flavor, but the cheese was a little too "sharp". Some people love sharp provolone but we were not the biggest fans- it has less of a creamy texture and way more salt, making it almost taste like slices of Parmesan. Again, the sandwich was seriously amazing and I feel bad picking it apart like this, but it wasn't the sandwich perfection we had on our first trip to Girard Avenue.

Our total bill was $18- apparently tax is included in the prices. Money well-spent- a great afternoon meal, with some extra walking to burn off some of those sandwiches. It even gave us an excuse to poke around the Italian Market- a place we never find ourselves visiting. As soon as our parents come to Philly, we'll be making a return trip!

Paesano's
Corner of 9th and Christian Streets
Posted by Julianne at 6:02 PM