J and I did a little birthday shopping for ourselves, and came across a set of quiche pans (like these tartlet pans, but slightly larger) at Williams-Sonoma. We figured we could not only use them for making individual serving size quiches, but also for mini tarts and pies! Yes, we were trying to justify the $26 price tag (for a set of six).

Our mid-week snow day gave us a good chance to give them a test run, and quiche making commenced. We had been planning on making a bacon, mushroom, and spinach frittata, but after buying the little pans we spun the recipe a little in order to make the quiche. These may seem like the same dish, but there are actually a fair number of differences... basically, a frittata is more like an omelette that fills an entire pan, and is usually started on the stove top, and then finished under a broiler to cook that last bit of egg. A quiche usually has a crust (point 1 for quiche, in my book), uses a mix of cream and eggs to create a smoother, custardy consistency, and is baked from start to finish.

First step: make the crust. After making the dough for the lemon bars just a few days prior, we felt confident that we could create our own crust sans recipe, and "health-ify" it. We replaced the all-purpose flour with whole wheat flour, and subbed in a mix of olive oil and water in place of the two sticks (!) of butter (granted, we were making a smaller batch of dough as well). In the world of crust, this is probably as healthy as it gets.

I didn't measure very exactly, but into the mixing bowl went 1.5 cups of flour, a teaspoon or so of salt, and about 4-5 tablespoons of olive oil. I started with a healthy splash of oil, then a splash of cold water (from the tap during the winter is plenty cold enough) and started mixing. At first it created a very crumbly mix, but continually adding a little bit more oil and an equal amount of water soon found the dough forming a nice, slightly greasy, ball. We chilled it in the fridge for about twenty minutes to make it easier to roll out for the crusts. 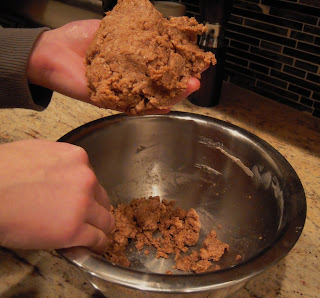 In the meantime, the oven was set to 450, and we started making the filling. We fried two or three pieces of thick center-cut bacon until crisp, and then removed them from the pan and used the bacon grease to saute a chopped onion, half of a package of sliced mushrooms, and the leaves from one bunch of red swiss chard. 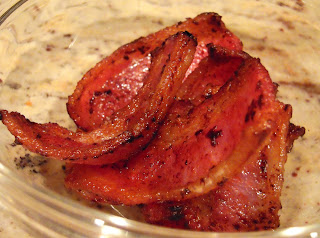 After these were nicely browned, softened, and wilted, respectively, we diced the bacon up and re-added it to the pan. Then, we allowed it to cool slightly so that when it was added to the eggs it wouldn't start their cooking process. In another bowl, we combined three eggs and about 3/4 cup of half-and-half (although you could use cream, milk, whatever you'd like) with some salt and pepper. After whisking, we added the sauteed mess and stirred it all together. It wasn't very "wet", but we figured the more substantial the filling the better. 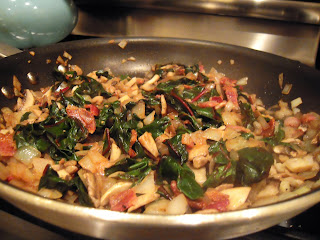 First though, the crusts needed to be rolled out, formed into their pans, and pre-baked. We also just purchased a handy little pastry/dough roller, which was helpful here. The dough ball was placed on a well-floured counter and rolled out to about 1/8th inch thickness. Then, we placed one of the quiche pans onto the dough as a guide, and cut a rough circle. The circle should be about an inch or so larger in diameter than the pan so that it has room to cover all the way up the sides. 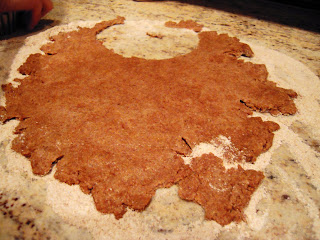 After pressing them gently into their pans, we baked them for about 10 minutes (at 450 degrees). 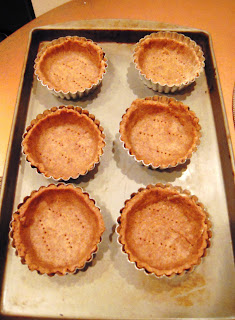 They didn't look very "done" when they came out, but they still had some baking to do! We lowered the oven temp to 350, and poured the filling equally amongst all of the pans (6 in total). If you do the math, that's only 1/2 a piece of bacon and 1/2 egg per quiche... not doing so bad on the health-o-meter. We baked them until they felt done to the touch- about 25 minutes. Quiche will continue cooking slightly even after it is pulled out of the oven, so normally you would want to pull it out before it is completely done. However, our filling had so much solid volume to it that the "setting" of the custard was hard to visualize.

After cooling for a few minutes, we freed them from their pans- very easy to do as the pans have removable bottoms. Just push the bottom up from the center (levelly), and the side drops away. We did not grease the pans in any way; the oil from the crust is enough to prevent them from sticking. 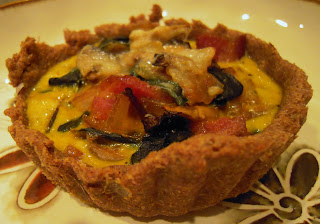 Paired with a simple salad, it made an easy, light dinner (good for those days that you sit at your computer working ALL DAY since you can't go outside into the blizzard). We also froze a couple of them for future consumption.

The quiche had great texture and flavor- even with the small amount of bacon, the pork flavor was fully present, and it was chock full of greens and sauteed vegetables. The egg made a great binder for all of this, and provided smoothness in every bite. The crust also helped hold the whole thing together (as crust normally does...), but it was a little bit too... healthy. Sad to say, our efforts to raise the nutrition content may have backfired. We still enjoyed it, but the whole wheat-i-ness was a bit overpowering- it almost had that raw, uncooked flour taste. Perhaps next time we will try to use a fraction of all-purpose flour, and maybe experiment with a little butter.
Posted by Julianne at 10:23 PM