This past week's CSA share was quite loaded but also somewhat "familiar" -- it included some of the novelty items of the first two weeks such as purple broccoli, but also included lots and lots of greens- kale, baby spring greens, romaine, and more bundles of spring onions (I think a farmer out there has a large surplus). The one "new" item was rhubarb- but unlike the spring onions farmer, the rhubarb farmer was a bit stingy. We received two (and a half? one was tiny) stalks of the vegetable, which really isn't much. 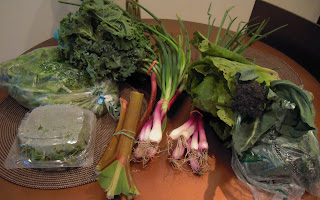 Rhubarb: front and center (lookin' a little like a weird webbed foot)

So what exactly do you do with rhubarb? Although it is officially a vegetable (it looks and feels a lot like red celery), this plant has been almost completely lumped onto the dessert menu. While searching the internets for a recipe that used just a tiny bit of rhubarb, the majority of what I found was on the sweet side. Strawberry rhubarb pie is of course everyone's favorite and most common, but you can also make pies with rhubarb alone, combine it with a number of other fruits, throw it into breads or chutneys, or in a rare instance of a savory option, use it in a stirfry (apparently the tartness of rhubarb goes well with Thai style dishes). 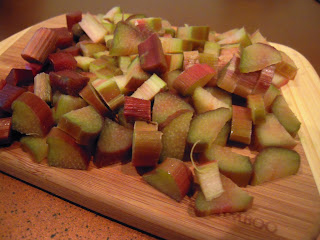 As the long holiday weekend was one of quite a few indulgences, I simply was not in the mood to create a huge pie filled with sugar and butter that would surely tempt me until the last crumb was eaten. I also wasn't looking to do any extra grocery shopping- I needed all of the necessary ingredients to be in my fridge and pantry. Therefore, I leaned towards the muffin/bread category. I found this recipe while perusing TasteSpotting and deemed it the winner. However, it was going to need a bit of tweaking- it called for two cups of rhubarb which I most certainly did not have, and a few other ingredients were missing as well. Thankfully, I'm pretty much the Queen of Improvisation (which unfortunately usually doesn't end up so favorably when baking).

The adjusted recipe that I used is as follows: 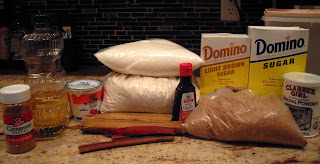 Mix together the dry ingredients (flour, coconut, baking soda, and salt) in a medium bowl. In a separate bowl, mix together the oil and sugars, and then add the vanilla, cinnamon and flax + water combination (yes, vegan eggs once again!) In two or three steps, add the flour mixture alternating with the yogurt into the wet ingredients until everything is combined. At this point, our mix seemed quite wet, which is why we added our extra "half handful" of flour to achieve a better consistency. Finally, add in your chopped rhubarb (smaller is probably better, and make sure to discard all green leaves as they are apparently poisonous). 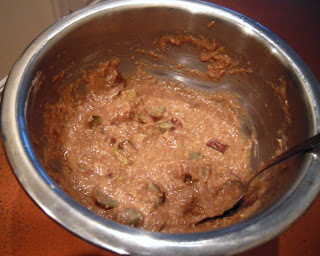 Spoon into muffin tin- we used muffin/cupcake wrappers but if you don't have them, use a muffin tin sprayed with cooking spray. Fill each wrapper about 2/3rds full, and top with pecans- or whatever nut you prefer. I crumbled about one whole pecan onto each muffin. The original recipe- which we halved- was supposed to make 12 muffins. I'm not sure what kind of muffin tin the other baker was using, but our version also made 12 muffins, albeit on the smaller side. 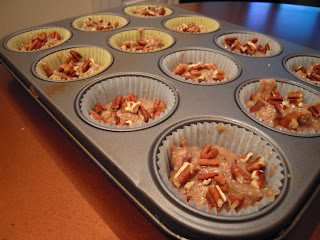 Bake at 350 for approximately 30 minutes (we took ours out a little early). My taste test was done soon after they came out of the oven-- I couldn't wait! The muffin was still very soft and warm, definitely nowhere near dry (this is a good thing). The crunch of the nuts and the almost gooiness of the rhubarb complemented each other well. The faint sweetness of the muffin and the nutty flavor from the whole wheat flour and flax was offset by the tartness of the rhubarb, in a pleasant way. These are definitely not an indulgent dessert, but rather a healthy treat. They will definitely be consumed for breakfast in our household as well. Thankfully, my improv work in the kitchen was a success. Overall, a fun experiment with a new food item- I never expected to prepare a dessert from our CSA box! I'm sure we are in for a long summer full of continued surprises. 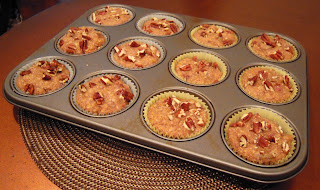 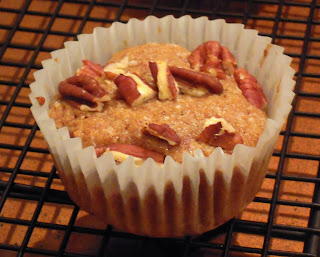