As spring moves on into summer, our CSA box is getting more substantial (and quite heavy. I'm glad the pick-up spot is two blocks away!). This past week, we received:

(No pictures were acquired- sorry!)

Yes, I had to somehow squeeze seven "heads" into our fridge- the produce drawers were stuffed to the max, and several items couldn't quite fit in (leading to some wilted green onions, but oh well. Is there some way to make the entire fridge humid?) Spring is definitely lettuce season, and so we have been eating what seems like endless amounts of salad. J swears she would never get tired of salad, but frankly, I think I might be reaching my limit.

All of this week's items are quite familiar to us, but not necessarily ones we would buy on a regular basis. I wasn't really quite sure what to do with the Napa cabbage- for those of you who don't know, it is sort of a cross between crisp lettuce, white cabbage, and bok choy. It originates in China, and therefore is often used in Asian style dishes. Last week, I created a cabbage stir fry with a soy sauce based dressing, but this week I wanted to more deeply explore my Napa options. 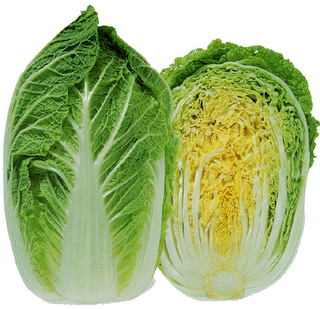 First stop: TasteSpotting. Yes, you've heard it here before, but seriously, I'm not sure what I would do without this website. A search for Napa cabbage spit out a handful of options, and I decided to run with the vegetarian potstickers. A little bit random, something I would never think to make myself, and a good first "trial" use for a vegetarian protein J and I have never tried before-- tempeh. We like tofu, but we've never branched out into the realms of tempeh and seitan, other forms of vegetarian protein that can be used in ways that tofu can't. Tempeh, like tofu, is made from soybeans, but is more naturally processed and uses the whole beans in its creation. There may or may not be a fermentation stage. Sounds kind of strange, looks kind of strange, but hey, we're always interested in trying out new foods.

Vegetarian Potstickers (adapted from this recipe):

When browsing the options at our grocery store, we realized that we couldn't use plain tempeh-- they simply did not sell it. However, they did sell a tempeh-based product that was conveniently already flavored with Asian-y spices and sauces. A little disappointed I wouldn't be able to follow the original recipe, but less work for me. I also had the option of wonton wrappers and egg roll wrappers- basically the same thing in two different sizes. Technically, I should have gone with the wonton wrappers, as potstickers are usually on the small side. I had planned the potstickers as the base of our meal, so I went with the larger egg roll wraps instead.

The first step is browning the tempeh. I opened up the package and was greeted with some brownish cubes in a bit of sauce. As I dumped them into the pan, they started to fall apart pretty quickly. This product is a mix of soy and brown rice (which is common in tempeh making), and more closely resembled the latter. After a few minutes in the pan, it started to brown up (alright, it was already brown. It began to get a bit crispy). I gave it a quick chop and transferred it to a bowl, and then added the cabbage to the hot pan. 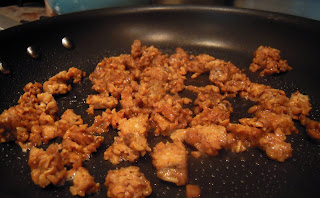 A very thin slice is critical here- the cabbage will cook down quite a bit, but you don't want a lot of chunks in your potstickers. After five minutes of steaming and stir frying, the cabbage was very wilted and turning a bit brown. Into the bowl it went, and sliced mushrooms took its place in the pan. Another few minutes and the mushrooms were on their way to softening up. To hasten their progress, I added the white cooking wine which evaporated quickly but allowed a bit of steaming action for the 'shrooms. In the last minute or two of their time in the pan, I added the chopped green onions to remove some of their onion-y bite. All of this made it into the same bowl with the tempeh and cabbage. I sauced up the mix with a tiny bit of soy sauce and sesame oil- the tempeh came with its own ginger sauce and I knew it wouldn't need a lot more flavor (or sodium. Yikes!) 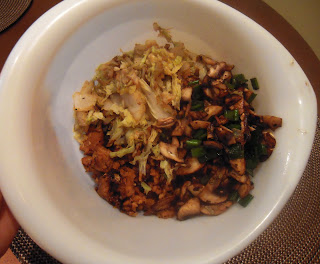 Then, potsticker creation. The egg rolls are very easy to work with- pliable and soft. I laid each wrapper onto a "plate"- a very classy piece of tin foil- sprayed with cooking spray, and spooned 2-3 tablespoons of filling into the center. Then, I used my finger to smear some water onto two adjacent edges. Fold over into a triangle, press (somewhat rigorously), and then create ridges by pinching the connected edges together. Repeat with remaining wrappers and filling. I was able to make eight (extremely large) potstickers- each about the size of a small calzone! The dough is raw and the filling is a little cold at this point, so back into the pan they must go. 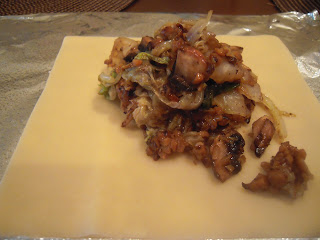 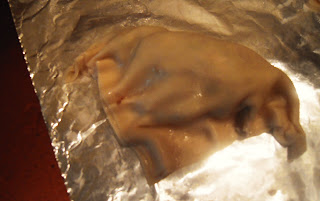 I like my dumplings a little bit crisp, and the recipe was informative on how to go about doing this. Heat your pan, spray with cooking spray, and then place each potsticker face down into the pan (it got a bit crowded). After 2-3 minutes, flip over, and resume the crisping process on the other side. Then, add 1/2 cup of water to the pan and place a lid on top. I checked after a minute or two and all of the water was gone, so I ended up using more water than the recipe called for. This step allows the parts of the potstickers that are not actually sticking to the pot to be cooked via steaming. I allowed them to steam for 3-4 minutes total and then removed them from the pan. 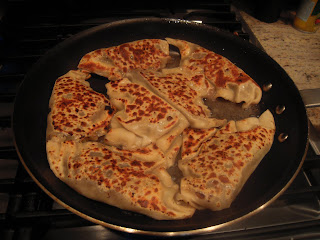 You can serve these with a simple teriyaki or soy sauce... sauce, but I thought they were delicious on their own. Although it's on the thin side, the egg roll wrapper provides a very doughy bite. The flavor of the filling was really good- I felt like I was eating at a Chinese restaurant. The soy sauce and sesame oil definitely boosted what sauce the tempeh came with, providing tons of salty, savory goodness. The tempeh and mushrooms together had a nutty, earthy flavor which was balanced by the cabbage- still slightly crisp and fresh, even with all that cooking time. The potstickers were also extremely filling- I could only eat two before calling it quits. 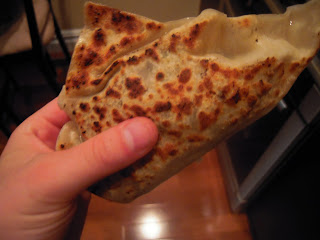 Supplemented by the rest of the head of Napa (stir fried the "usual" way) and some roasted broccoli, the dinner was quick (about half an hour?), easy, and a bit of an adventure. They didn't end up exactly like a classic potsticker, but they were delicious nonetheless. I'd love to try these using plain tempeh and adding my own flavors, but the tempeh product we picked up was a great substitution. I also think you could use the same filling and wrappers to produce excellent egg rolls, which could then be baked, pan-fried, or deep fried. Forget Chinese takeout- make your own healthier version at home!
Posted by Julianne at 7:12 PM