A & I have an almost ten year mostly-love-but-some-hate relationship with running. After many years of using running as a fun activity/exercise, we've recently been trying to get back into the racing scene. The goal here is not to win, but to give us something to train for and have fun with. Because so much of our running is typical of "road" running, we decided to sign up for a 10k trail run, imagining six miles of a nice shady dirt path in the country.

Most races offer pizza and Gatorade at the finish line. However, the idea of eating a greasy piece of pizza after racing is in no way appealing. Knowing we'd have about a half hour drive home after the race, we knew we wanted to pack some snacks. Post-race food should be protein-rich, but instead of buying some processed protein bars, we decided to make our own. A found this recipe online, and we decided to roll with it because we already had all of the necessary ingredients. Also, it was just so simple. 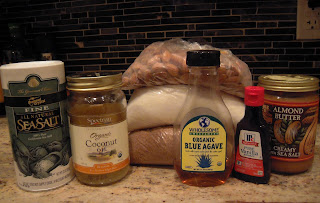 We started out with 2 cups of almonds, which needed to be chopped up in the food processor. Our food processor is a little on the miniature side, leading to a few improvisations. We chopped the almonds relatively fine, but depending on how chunky you like your power bars, you can chop for more or less time. We also added in the flax meal (1/2 cup) and the almond butter (1/2 cup) which completely filled our food processor. A little more blending to try to mix these ingredients together (could definitely be done in a stand mixer at this point!!), and then we gave up on the processor and switched to arm power, moving the mixture to a bowl. We added in the remaining ingredients (pinch of salt, tablespoon each of agave and vanilla extract, and 1/2 cup of both shredded coconut and coconut oil) and mixed everything together. The original recipe includes a step for "melting" the coconut oil (much like you would melt butter) since room temperature coconut oil is typically solid. Thanks to the ridiculously hot weather, our oil was already liquefied in the jar, eliminating the need for this step. Mix everything well, press into an ungreased 8" pan (or really any flat dish), cover and refrigerate. 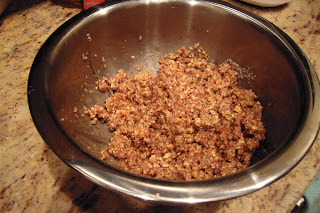 The night before our race, I cut the now-hardened mixture into 8 protein-bar-sized rectangles and wrapped them up in foil, making it easy to snag a few when we were packing up early the next morning. 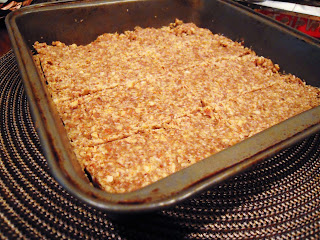 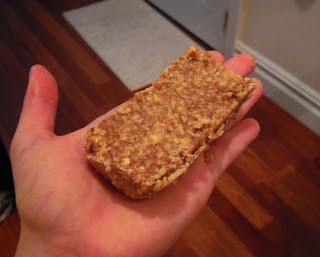 The race was tough- not at all like we imagined. Rocky single-file trails up and down mountainous terrain, requiring the use of lots of muscles not used to working quite so hard. (This picture is only a slight exaggeration of what we were dealing with.) While we had an absolute blast, we were definitely glad to have a good source of protein at the end. Add in some fruit and an infinite amount of free VitaCoco coconut water, and we felt very well refueled postrace. 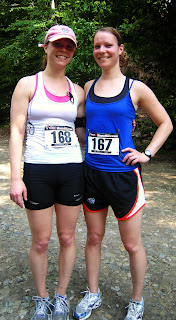 We're suckers for anything with nuts in them, so these bars were automatically winners in our book. The mix of chopped nuts with almond butter gave the bars an overall nutty flavor with lots of crunch. Coconut flakes provided another subtle flavor- we used unsweetened so the bars only had a touch of sweetness from the agave. The oil provided some healthy fats and helped to hold everything together. Because the bars sat in the car during the race, they "melted" into more of a nutty mush, but it was still easy to eat- no utensils required. I do think they'd be a bit more appealing in their hardened form, so I would suggest using a cooler or using this as an at-home post-workout snack if you want your bars to remain intact. Overall they were perfectly delicious and exactly what we wanted to eat after the run. The original recipe suggests melting a layer of chocolate over top, which would move these guys out of the "snack" and into the "dessert" category- perhaps we'll try it in the future. 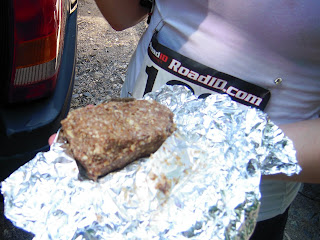 Two bars mushed together into nutty deliciousness.
Posted by Julianne at 6:12 PM