In a city chock full of restaurants, it's fairly easy to find whatever it is you're craving. Restaurants featuring food from all corners of the earth abound (although some require a bit more seeking out than others). However, I do have to say that sometimes it's the basics that are more difficult to find here. Looking for an affordable steak? I'm not sure it exists. A high quality red gravy Italian place in Center City? Can't think of one. Creative sushi in a more upscale environment that provides creative options beyond raw fish? (I mean really, I am not interested in a seaweed salad or chicken katsu). I've been on the search for this last one for quite some time. I can't give a good sushi recommendation for any restaurant in Philly- and no, I have not tried many of them, so if you want to throw out your suggestions, I'd be happy to take them. Recently, two new sushi restaurants have opened, both with more of an emphasis on presentation and decor than the typical sushi spot around town.

Looking for a dining destination to take a visiting friend, I decided on Doma (one of these two new options). Boosted by a fairly good review from Craig LaBan, I knew it had to be several steps up from the other sushi places I've tried (some of which I'm not sure would even receive a single bell). I made reservations just two days in advance- I wasn't sure what the walk-in status would be as it is a fairly small place. However, our dining mate was running late and I called last minute to change the reservation. Extremely accommodating, thankfully- although we later noted that the restaurant never reached full capacity even at the height of dinner service. Still, some restaurants may have been a little less cheerful about our last minute switch.

Doma's location perhaps contributes to its seeming lack of booming business. Located on the edge of Center City civilization (ie Callowhill Street) on the same little strip as Sabrina's Cafe and King of Tandoor, it's not exactly prime real estate. However, we appreciated the walk, and found the quiet street a bit of a sanctuary away from the rest of the city. Doma sports two outdoor tables (small parties only), which seems unnecessary: dining outdoors can be great, but you usually want to have some sort of a view or at least a steady stream of pedestrians for people-watching. The diners seated outside had a great view of an empty grassy lot. Inside, the dining room is long and narrow, but well-lit and with appropriate decor- certainly Japanese influenced but not to the point of annoying stereotypes. The hostess double checked that we were alright with sitting at a bar height table (not sure why this would be a problem?) and showed us handy hooks under the table for our purses. Hey, it's the little things.

The menu is split into several parts, which can be problematic for people who can't seem to make decisions (that would be me). Cold appetizers, hot appetizers, entrees (which include a mix of Japanese and Korean dishes), Bento boxes, and a variety of sushi, sashimi, and rolls. Craig LaBan raved about the Korean food- bibimbop and chargrilled shortrib for example, but we were there for the sushi. We decided to tackle specific areas of the menu, creating a tapas style appetizer session and each choosing a specialty roll.

The appetizer options are quite varied, and each sounds as delicious as the last. We struggled to choose only three but decided on a single cold appetizer along with two from the hot options. The waiter asked if we wanted them all at once, but we chose to have them arrive as they were prepared- better for enjoying each dish on its own. The first up was the octopus ceviche ($9). Several thin slices of cold octopus were topped with a fresh mango salsa. The presentation was beautiful (and very photogenic), something we would comment on throughout the meal. However, the serving was on the small side- only 5 or 6 slices, not easily split among three people. The meat had an excellent chewy texture and was well complemented by the somewhat spicy but sweet fruit, but the flavor of the octopus failed to present itself. I know it is not supposed to have a heavy flavor, but a hint of seafood would have been appreciated. Fortunately, this was our least favorite part of the meal and it was over and done with quickly. 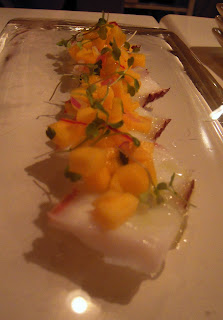 The second dish to arrive was the steamed buns. As you know from our Nashville trip/Chinatown adventures, we're interested in bao buns. We weren't expecting to find these at a sushi restaurant, but were thankful that the menu held enough breadth to cover these delicious little items. Doma's version did not disappoint. Instead of a thick chewy breading, the bun was flat and openfaced, allowing the filling to be placed on top and then wrapped up. There are three options for filling, and we chose the meatiest of them all- pork belly ($12 for 3 buns). Thick slices of the fatty meat were piled with pickled cucumber slices and a rich sauce. No real assembly required, just pull one side of the "bun" over the meat and devour. The meat itself was perfectly cooked, and extremely well complemented by the pickles-very thinly sliced, sweet and sour with much remaining crunch. Bao buns tend to stick to your teeth, and the crunch was really key to breaking up this soft texture. The sauce was also spot on- It had me wiping my plate of the remaining drips with the last few bites of bun. 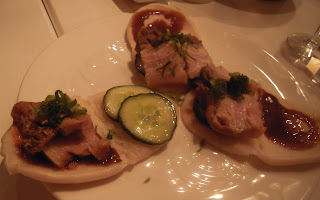 Minus five for non-uniform plating. 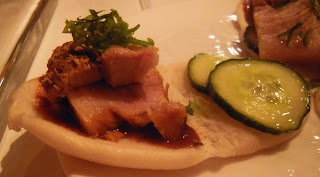 Our last appetizer was also the most unpronounceable- okonomiyaki. The menu describes this dish as a Japanese-style seafood pancake, but a bit of Wikipedia research was required to really decipher what it was that we had eaten. The base of the dish is a thick "pancake", similar in thickness and serving style to pizza. It is formed from flour, grated yam, eggs, shredded cabbage, bacon, green onion, and a variety of seafood- I believe ours had squid and shrimp at the very least. All of this is broken into small pieces, mixed together, and then grilled up like a pancake. It almost resembles a very large potato pancake. This is then drizzled with spicy, creamy dressing, and topped with "vegetables" (pretty much just finely shredded red bell pepper) and bonito- yes, those annoying woodsy flakes that creep and crawl with the slightest movement of air. It appears as if it would be a bit difficult to eat with chop sticks, but is surprisingly sticky. The combination of flavors and textures (even with a sparse covering of bonito) was really a delight, and it was a very shareable dish. 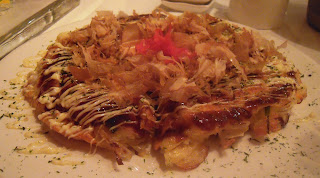 We had a good view of the sushi chefs throughout the night- two men working sporadically to construct and plate a huge variety of possible rolls. Watching the plating was fun- many of the rolls require a very artistic presentation. The three rolls that we ordered were not of this variety, but were still beautiful to look at and well presented side by side. The Hamachi Verde roll ($9) consisted of avocado, jalapeno, scallions, kanpyo (apparently dried squash?), and roe, and is topped with hamachi (yellowtail) and kiwi. A fairly simple roll in relation to the other specialty rolls, but simplicity worked in this case. It was somewhat strange to have the fish on top of the roll, but it worked in its favor- allowing the flavor to be more accessible. The kiwi added a sweet, tangy finish. 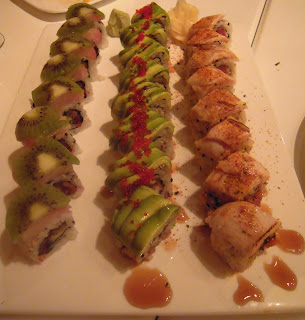 The Dragon roll ($12) is a classic found at many sushi restaurants- but a popular dish can often be used to gauge the overall quality of a restaurant. Eel, cucumber, and tempura crunch are wrapped and topped with avocado, roe, and a thin, sweet sauce. Again, Doma did a great job- the roll was well constructed, the avocado was perfectly sliced (I'm not sure how they do that), and the flavors fresh. The only necessary addition was a dab of wasabi- it needed some heat. The wasabi at Doma is definitely on the weak side- at least to the point that I could consume little bits of it alone without wanting to cry. I like my sushi spicy, so this was a bit of a downside. 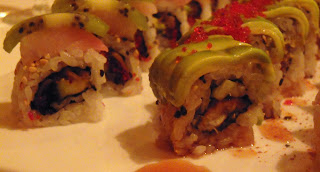 Finally, the Triple Spicy Double Tuna roll ($13)- long name, but relatively few ingredients (for sushi anyways). The spice is provided by spicy sauce and sriracha inside, and a sichimi pepper ground on top (probably the spiciest of the three). The roll contains tuna, tempura crunch, and scallions- the short ingredient list forced this roll to be chock full of fresh tuna, which we fully appreciated. It is also topped with seared albacore tuna (a lighter, less smooth version of the fish), hence the "double" part of its name. It was a bit pricier, but well worth the money considering the quantity of fish involved. It also lived up to its name- very spicy in an unexpected way. The ground pepper powder hits you like quality Mexican food- a type of spice that is not usually found in sushi (spicy sauce and wasabi are more of the nose-burning kind of heat).

At this point, the meal had been very satisfactory- many small portions spaced out throughout almost two hours. We were hesitant to order dessert, but figured that splitting a single dish couldn't hurt. We settled on the Japanese sundae ($6), a base of green tea ice cream blended with red beans and tiny chunks of mochi, all topped with fresh berries, and green tea infused whipped cream. The dish successfully combined many typical Japanese flavors, allowing them to meld together without losing each of them individually. The whipped cream seemed a little off to me- I was sure that it was actually "fish" flavored, but I think that it was solely because of the seeming lack of sweetness. Try drinking strong green tea with no sweetener- the harshness of it can become almost savory. Thankfully, the whipped cream slowly melted into the ice cream, and at that point added a little extra flavor burst. The ice cream and bean mixture was interesting- red beans are considered dessert in Japan, but are not terribly sweet. Here, the beans were whole, providing a creative textural addition. The berries were perfectly fresh- altogether, the dessert was a good ending to the rest of the meal- not too rich, allowing everything to be enjoyed in moderation. 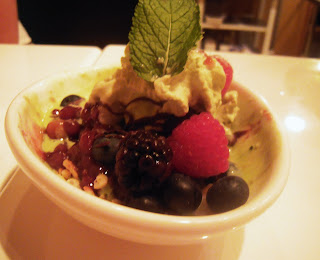 Our final bill didn't break the bank- solid, creative, fresh sushi with a variety of interesting sides and appetizers, as well as a bit of dessert all for a very reasonable price. This will definitely become our go-to sushi spot (unless we're just loafing around and want some takeout to eat in the park), particularly during good weather, as it allows for an enjoyable walk through a part of the city we don't often see. Our dinner here was more of an eating adventure as opposed to an "eat and go" meal, providing both the food and the entertainment for the evening. It would be a superb date spot (if my boyfriend was remotely interested in sushi), and fun for small groups as well. Finally, a sushi success!