A few years ago, when we were still youngin's in college, our dad came up for a visit (Yes, our parents like Philly. A lot.) and we chose to check out the brand-new-at-the-time New Orleans style Cajun restaurant Les Bon Temps. It was a gorgeous place with lots of fleur de lis, stained glass, and a set of grandly sprawling marble stairs showcased in the center of the restaurant. The food was terrific- I can still remember the eggplant beignets, delicious in their unique sweet-yet-spicy way. We liked it so much, we even made a reservation there for our graduation dinner, though we later canceled it due to its slightly inconvenient location. Unfortunately, about a year after we dined on fried oyster po boys' and jambalaya, Les Bon Temps was closed.

Fast forward a couple years to now. We have kept an eye on what the space was destined for, and as soon as the menu for the replacement restaurant was released, we knew we would eventually check it out. It just so happened we were due for yet another visit from the folks, so it seemed like the perfect occasion to return to one of the newest spots in Philly, now called Tweed. Considering the new ownership (a Philly native turned French hotelier) and the choice of chef (previous experience with Eric Ripert), we had pretty high expectations.

Upon entering the restaurant, the complete gutting and renovation of the space was appreciated. Everything is very modern with clean lines, simple color schemes, and a good use of glass and dark wood combinations. We were seated at a table right up the new (and much narrower) staircase; I loved the rose velvet on the chairs but did take note of the seeming lack of actual tweed patterns. The service was good if not a bit awkward- our waiter seemed very eager and checked on us periodically throughout the dinner with lots of "How is everything?" and "Can I get you anything at all?". These might seem like normal questions, but he asked them in a way that seemed borderline obsessive.

The first thing we were served was the bread- before drink orders were even taken. There was a choice of a nutty-raisin-wheaty bread (obviously my choice) and a rosemary foccacia (obviously A's choice- she hates raisins), both of which were good. The water they serve is cucumber-infused, which some like and some do not, primarily based on whether or not you enjoy vegetables. I thought it was an upscale touch but certainly understand that not all diners appreciate it. Our waiter provided a rather short list of specials (one appetizer and one entree), which A & I ended up taking advantage of. The menu is considered "classical food with a modern twist" and makes a concerted effort to utilize locally produced ingredients (yay freshness). With this in mind, the heirloom tomato appetizer making an appearance as a special sounded like just the right start for a hot summer evening.

Although I don't know how much this cost (thanks Mom and Dad!) the salads and appetizers hit right around $10 so I'd think it was probably priced pretty equivalently. A & I were really looking forward to thick slices of sweet and firm tomato... and that is not quite what we were served. Six thin slices of slightly mushy tomato were completely soaked in a basil infused oil with lots of chopped shallots, salt, and of course the requisite drizzle of balsamic. I couldn't even taste the tomato, though I am not sure whether this is because the taste was completely masked or because it simply was not too flavorful; I'm sad to say I think it was the latter. In our opinion, if the tomato is no good (whether that be taste/texture/etc), you should certainly not feature it as a special. Common sense? Apparently not. 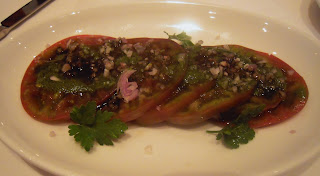 For the entree, A & I both chose meat that we love- mine in the form of grilled mahi-mahi, and her's in the form of a duck burger. The mahi dish ($24) was a complete 180 degree turnaround from the tomato disappointment. The large-ish piece of grilled fish was perfectly cooked, creating flaky flavorful mouthfuls. Served on a proportionate pile of sauteed spinach and covered in a sweet red pepper and onion concoction... let's just say the combination neared perfection. Lots of fresh herbs helped round out the flavors. I'm not sure if this was a seasonal addition to the menu (aka they had some good mahi come in that day) but I don't see this dish on the PDF menu on Tweed's website. If it was, I feel very lucky to have eaten this dish. If not, I feel equally lucky because I can go back and order it again! 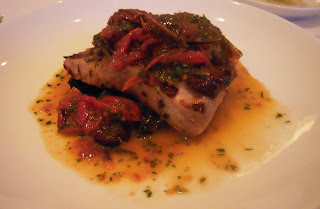 A enjoys duck, so the duck burger ($12) which includes a choice of fries or salad, was an easy choice. The menu notes the addition of caramelized onion and cherry chutney- sounds like two good accompaniments to me. However, they fail to note that the duck is heavily accented with orange peel and Grand Marnier- two very distinct flavors that completely overwhelmed the meat. The ground duck was pressed thin and overcooked (A ordered her burger medium), making for a mealy dry orange-flavored patty. The addition of the somewhat sparse toppings within the almost-stale onion-flecked bun completed the overall very unenjoyable sandwich. The lightly dressed lemony pile of spring greens was good, but didn't make up for such a disappointment. 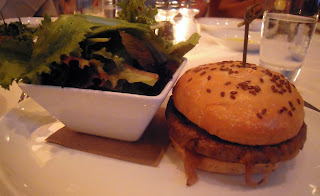 The dessert menu had a few intriguing options (birchbeer float? peanut and chocolate ganache bar?) so we decided to split the carrot cake ($7). This dish lived up to Tweed's promise of a twist on a classic, as it was served up roulade style with a goat cheese cream spread. The goaty-ness of the cream could have used a little more sugar to balance that flavor, and the actual cake seemed a little on the dry side (an unfortunately common theme here...) and tasted more like a simple spice cake. A scoop of butter pecan ice cream provided the nuttiness you usually find within the cake while a carrot juice drizzle was the only real form of carrot we could see. This rendition of carrot cake made us wish for the regular old kind with the orange frosting carrot on top. This was absolutely one of those "good in theory, bad in practice" type dishes. Though I didn't try it, the dense lemon-hinted cheesecake with fresh blueberries was proclaimed a much better option off the dessert menu. 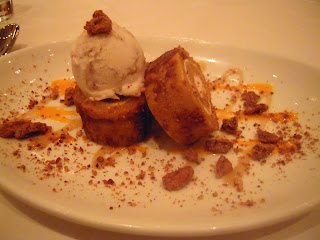 Overall the dinner leaned toward the negative (with one shining star of a grilled fish). We really wanted to like it, but everything just seemed a little too over-thought. The tomatoes might have been good with less basil, the duck may have been good with less orange (and less cooking), and the dessert would probably improve with the addition of carrot and nuts back into the cake. Seemingly simple fixes that take out the "twists" and move back toward the "classics". Pricing was fair for the city, the environment was slick, service was certainly adequate, but the real misses in execution will probably deter us from visiting again, at least until we give the kitchen some more time to work out the kinks in the menu.