A decade ago, Philly's renowned "Restaurant Row" was situated on Walnut Street, not far from where we currently live. Hugely successful restaurants with famous chefs at their helms lined the street- Le Bec Fin, Brasserie Perrier, and Susanna Foo's among the highlights. In the past few years, the restaurant scene here has begun to shift. Brasserie Perrier closed, Susanna Foo moved out to the suburbs, and Le Bec Fin has become a much more casual spot. Restaurants no longer require jackets; you can get away with jeans practically everywhere. This shift has been accompanied by a location shift for "Restaurant Row"- the city now sports several areas where critically acclaimed restaurants take precedence over retail stores.

One of these is 13th street- an area we've discussed before in our post about Zavino. There are literally too many good restaurants here to list, so I won't. A relative newcomer, Sampan, has been on our "list" for a few months, and the return of one of our fellow foodie friends sparked our desire to try it out. We're not sure why we waited quite so long.

Sampan (pronounced literally how it looks: SAM-pan, not SAM-pon as we jokingly called it) is touted as specializing in "Asian street flavors," offering a good variety of small plates that span a number of different Asian cultures. The chef and owner, Michael Schulson, is a fantastic young chef- he headed the kitchen at Pod when it first opened, and had been around the block prior to opening Izakaya in Atlantic City (in the Borgata, not an easy feat) and now Sampan. The Sampan website claims that it "cater(s) to a new generation of diners who go for lusty flavors in relaxed surroundings," again emphasizing the shift in the dining culture here in Philly. We want great food, but we don't want to be all uptight about it.

The restaurant space has been put together in an extremely interesting way- the exterior is one of the most eye catching designs in the city (I wish I had taken a picture!). Table centerpieces are created by filling metallic boxes with chopsticks ("real" silverware also provided) which is all fun and games until someone knocks over the box... This happened at the table behind us, and the quick congregation of waitstaff on the spilled sticks made me think it may have happened a few times before. It was surprisingly extremely busy for a mid-week summer dinner, but this speaks for the quality of the food served. The general service was quick, efficient, and fairly personable; our waitress helped us navigate the menu and was always somewhere nearby. 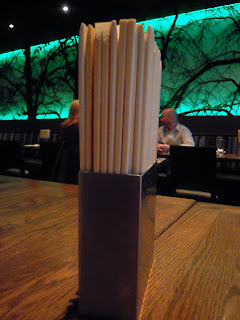 The menu is broken down into several categories: hot and cold "small plates", salads, satays (meats on a stick), wok dishes, and meats and fish (priced more as entrees). The price points average $11 for everything except the entrees, which are all in the $20's. The plates are made to share, but we decided not to do this, as three people attacking a plate can get a little awkward. Two to four dishes per person is a good range, although some of them are quite large.

J and I both selected two dishes and then chose a "side" to share between us. The waitress coursed out our meals, allowing us plenty of time between our first and second dishes. J's starter was among my favorite: the crispy calamari salad ($12). I completely overlooked this on the menu because the name makes me want to yawn. How many calamari salads have I had in my life? None of which are memorable. However, I think this is the wrong way to think about the food at Sampan- Schulson has taken a range of well-known Asian dishes and made them spectacular. The calamari salad was extremely heavy handed with the calamari- no complaints here (although J kept dishing out pieces to us as she claimed it was too much). The octopus was thick, sliced into inch long pieces, and then given a good tempura-type coating and lightly fried. It was like a juicy, chewy, fried calamari pillow. I have never experienced fried calamari in this way, and might never enjoy it again elsewhere after being spoiled by these. The calamari was accompanied by a pile of frisee- a light lettuce that perfectly complimented the large heavy calamari bites- and thin slices of fresh apple, all tossed in a spicy citrus dressing. It was all generously portioned and overall a great start to the meal. 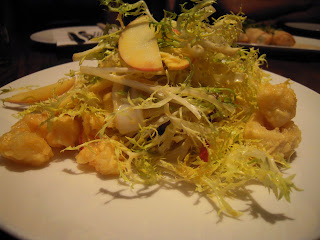 My first course consisted of one of the satay options- the Korean BBQ Beef ($9). My few encounters with Korean barbeque leave me with memories of juicy, tender steak, and Sampan did not let me down. Two skewers of beef were accompanied by a small pile of kimchi, a great accompaniment that provides another taste of Korea. The meat tasted slightly of soy sauce and smoke, and all but melted in my mouth. The price seemed a little high for what arrived on my plate, but each skewer had 3-4 generous pieces on it, allowing for many savory bites- a perfect amount, even when giving my dining mates a taste. 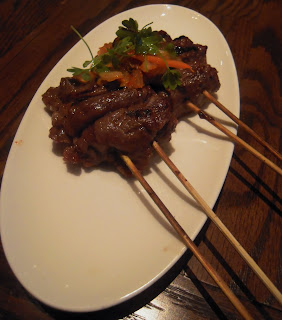 My second course was even more substantial- the Korean Rice Cakes (yep, I was on a Korean kick) ($11). Again, rice cakes. I can't turn them down. Round squishy discs of rice substance (looks, feels, and tastes nothing like rice), probably devoid of any nutritional value, but so amazingly fun to eat. These came tossed with sausage, chili sauce, and yu choy- an Asian vegetable that is something like broccoli rabe but smaller. The sausage was on the greasy side, but forgivable as that is the nature of sausage. A good portion of meat, crumbled throughout the patties- I tried to grab a bit of meat in each rice cake, mini-taco-style. The sauce gave a good spicy kick, although the green onions sprinkled on top were a bit on the sharp side (not a good compliment to spice). Overall, delicious, although not something I would put on my "must-order-again" list. 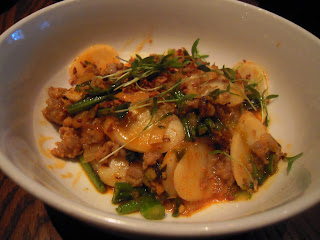 J's main course option was the Pork Bahn Mi ($9). Perhaps the most ridiculous deal on the menu- you could literally order this alone and call it a night. A bahn mi is a popular Vietnamese sandwich, which has taken over Philly in recent months (years?). It is basically a hoagie, with an Asian twist- usually topped with pickled onions and carrot, daikon, cilantro and mint, and filled with a variety of different meats. Sampan's version is stuffed with thin threads of pork belly- sliced so fine that you don't feel your mouth gush with fat in each bite (as pork belly tends to do). The sandwich fillings were numerous, but not voluminous- each bite of the sandwich flattened the bread and made it easy to eat (but perhaps not as filling as it appeared). The bread seemed like a classic, crusty Italian loaf, carbs much appreciated. The flavors stuffed inside- vinegary, sweet, spicy, herby- all held their own. The meat almost seemed like an afterthought. 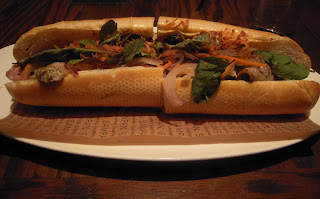 On the side we ordered the crispy brussel sprouts ($7), trying to sneak some veggies into our meal. While I'm glad we ordered them, I wouldn't count them in the healthy column for my day's eats. Fried in the wok until they were almost black, the brussels took on an entirely different character. They tasted nothing like brussel sprouts, but instead like crispy, salty chips- somewhat reminiscent of a very decadent kale chip. Tossed with chili sauce and topped with fish sauce and crunchy puffed rice, they were extremely addicting. 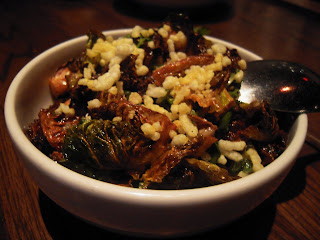 We also sampled a number of other dishes ordered by the third member of our party, all of which brought rave reviews across the board. Some may criticize Schulson for being uninspired, unoriginal, etc, etc, but honestly, that type of criticism comes from a lack of any other negative aspects. The food is great- I left the restaurant almost relieved that Sampan exists. I honestly have not been so impressed and excited by a meal in quite some time. I wholeheartedly recommend it to anyone and everyone, and will probably be raving about it for quite awhile.