As proud participants in a CSA, we definitely think more about eating fresh/organic/in season/local. When finding recipes and meal inspiration to use our seemingly never-ending produce, I usually turn to other blogs (mostly through TasteSpotting, of course). I will occasionally "borrow" some recipes from old Cooking Light magazines at home, or from random copies of Food and Wine left in the lunchroom at work, or browse around the Food Network website, or just straight up Google an ingredient. I rarely use real cookbooks, mostly because I don't feel the need to pay money for recipes when there are so many available online. However, I do happily accept cookbooks as gifts.

Recently, a friend graciously gave us one of Emeril Lagassse's books, "Farm to Fork: Cooking Local, Cooking Fresh." Apparently Emeril (who happens to be my very first television chef obsession) has long been committed to the local food movement, and dedicates the book to the "farmers and fishermen who keep on keepin' on." It is actually a beautiful book, full of a variety of recipes- from the very simplest dishes to some more complicated and sophisticated recipes. I have read through the entire book about three or four times now, and continue to spot recipes that I am just dying to try. The book has also come in handy during our CSA start- it is broken up into food categories such as "Leafy Greens" and "Thistles, Stalks, and Pods" (that would be the okra and artichoke family). The beauty of the book is broken up a bit by the Emeril-isms sprinkled throughout, adding a touch of humor in his short intros to each recipe- for example, he starts the intro to "Curry Scented Roasted Cauliflower" with "Oh, babe." He also has extensive sections on meats and canning/pickling, which I have largely ignored.

I have now conquered three recipes from the book, Warm Potato Salad, Rustic Blackberry Cobbler, and Cheesy Creole Tomato Pie. The Warm Potato Salad frankly wasn't my favorite, but the other two were good enough to share. Any fruit cobbler is the perfect summer dessert, but blackberries bring back special childhood memories of running through the prickly plants that grew wild in our backyard, gathering far fewer berries than went into my mouth. I wish I had those plants now-- I halved Emeril's cobbler recipe and still ended up purchasing at least $10 worth of berries.

This creation was actually nice and simple. First, combine the blackberries (2 pints) with a little sugar, cornstarch, and lemon juice and allow them to soften in the oven for about 20 minutes. Note: you could also do the same with any other fruit of your choosing- just alter the cook time to ensure full softness. In the meantime, I made the pastry for the topping. A bit of sugar and a little less than a cup of whole wheat flour (for the half recipe) is combined with a few tablespoons of butter until a crumbly consistency is reached. Then, the good part- heavy cream and vanilla are added to finish off the dough. I rolled it out on the counter, and then cut five rounds from it while the berries finished up. 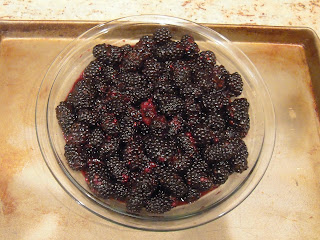 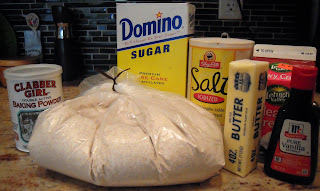 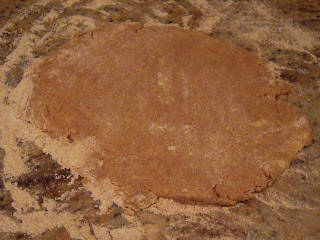 I gave the berries a little mix, topped them with the rounds of dough, and then topped these with a smear of cream and a sprinkle of sugar (large grain sugar would have been better, but not available from my pantry). A little more butter was added to the berries, and then back into the oven it went- 25 to 30 minutes is recommended. I actually split the baking time in two, as I knew I wouldn't be eating it immediately. This way, I could stick it back in the oven right before consumption to warm it up and finish the biscuits. 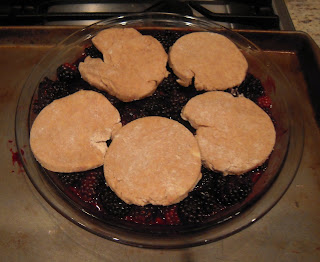 The cobbler was- just as I expected- a perfect summer treat. The berries still held some firmness, but were bathed in a thick juice. It wasn't overly sweet- I only used about 1/3 cup of sugar for the entire five servings. The nutritional stats for this have to be fairly decent overall, without that boring taste that accompanies most "healthy" desserts- another added bonus. My boyfriend said he wished it had a little more "cobb"- I think he meant more of the pastry topping in relation to the berries underneath. This could certainly be altered, but I thought it was just right. 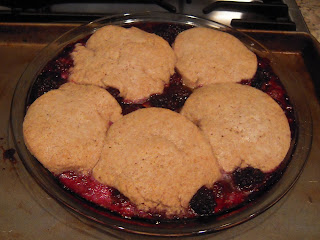 Feeling confident and inspired, I turned to tackle the Cheesy Tomato Pie. The recipe is meant to contain Louisiana Creole tomatoes- apparently a very rich, delicious tomato that I clearly will not be getting here in Philadelphia. The tomatoes that came in our CSA box last week were a perfect substitute- vine-ripened, local, and fresh. This recipe requires quite a bit more time and a larger number of ingredients than the cobbler, sadly. The first step was to make the pie crust- which ended up to be a bit of a disaster. I combined flour, salt, and pepper and "cut" in a stick of butter. However, my butter (actually 50/50 Smart Balance Blend butter) was fresh from the grocery store, and not completely cold. I think this was my first problem... I never achieved that crumbly pastry consistency; the butter smeared into the dough instead of forming tiny balls. Then, I added a few tablespoons of cold water, all at once, instead of slowly as Emeril suggested... probably creating dough that was a little on the wet side. This must then refrigerate for "at least 1 hour," but I'm a little impatient.

As I tried to roll out the dough on my counter, I could tell I had a bit of a sticky mess. The dough stuck to the roller no matter how much flour I rolled it in, which made forming a large flat circle almost impossible. When this was finally achieved, the dough was pretty much stuck onto the countertop, forcing me to peel small chunks off and transfer them to the pie dish. Thankfully, my final product was usable- all of the pieces melded together on the plate well because of the high moisture content. This must then be refrigerated AGAIN for 30 minutes before baking. Yes, this crust must be baked prior to making the pie. I lined it with tin foil and filled the tin foil with my pie weight substitute- dry Israeli couscous. It worked pretty well, holding the crust in its proper shape as it baked. A few minutes without the weights finished it off. If I was to follow the recipe exactly, I would have then brushed the pie crust with egg whites and allowed it to cool completely- neither of which I had the patience to do. 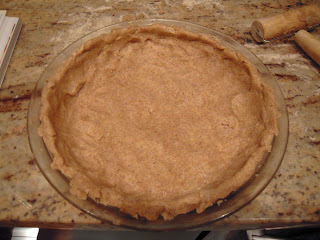 Finally, pie construction time had arrived. First, I sprinkled plain, dry breadcrumbs along the bottom. Then, I topped it with slices of juicy tomato, seasoned with salt and pepper. Atop these, I placed rings of sweet Vidalia onion- a few overlapping layers of slices. The next "layer" consisted of a mixture of mayonnaise and an egg yolk (I thought that's what mayonnaise was!). My mixture was pretty thick, so I thinned it with a little water to make it more spreadable- still not "drizzle"-able as Emeril instructs, but perhaps smearable. A sprinkle of chopped fresh basil and oregano, and then a handful of cheese- both products of my unwillingness to follow recipes exactly. The recipe calls for basil, thyme, Fontina, and mozzarella, but I bought a prepackaged bunch of herbs, which did not contain thyme, and a package of pre-shredded cheese that did not contain Fontina. Shortcuts, people. 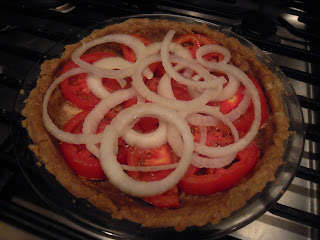 After the cheese went on, I began the layering over again, starting with breadcrumbs and ending with cheese. A final sprinkle of breadcrumbs, a small drizzle of olive oil, and the pie was ready to bake- another hour in the oven. Yes, this recipe took many hours of my precious weekend time. On top of this, Emeril suggests serving the pie at room temperature or cold- I think it would simply be a disaster to cut if it was hot. I waited until it was slightly warm, and then dove in (cutting was very doable at this point). The flavors came together just right, with the tomatoes and onions still maintaining some fresh firmness, the cheese melting over everything, and the herbs and olive oil flavors popping up in each bite. The breadcrumbs and the mayonnaise mixture helped hold everything together, and helped add both textural interest and a touch of creaminess, respectively. Yum! All of that work was well worth it, and I had no regrets using my fresh tomatoes in a cooked dish. It wasn't exactly a mirror of health, but using it as a main dinner course helped to balance this- a seemingly simple vegetarian dish (but as you can see, not terribly simple to make!) 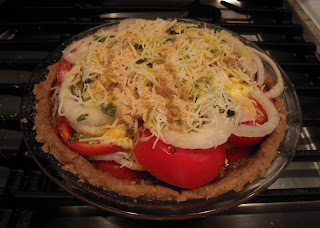 To make this a little easier, I would recommend buying a premade pie crust. The crust was really not the highlight of the dish at all; frankly, the flavors of the filling were enough to make me happy. If you have a crust available, the dish would only take an hour- a quick construction of the filling, and then baking time. Using top quality tomatoes and a sweet onion are critical, but beyond that you can also make substitutions and changes as you see fit. As Emeril points out throughout the book, local foods and fresh ingredients can make a world of difference. To our CSA farmers- many thanks for making our summer eats so delicious!
Posted by Julianne at 6:29 PM