Since Meritage renovated and "reinvented" themselves about a year ago (?), they've been rolling out different specials, including a vegan tasting menu and Korean tacos (originated at Ansill. So good.). Although we've been to Meritage in the past, and certainly enjoyed the food, it wasn't exactly the kind of place we wanted to run back to (a little pricey for food that was solid but not stellar). However, they started another new special last week: Korean Fried Chicken. Highlighted on several blogs, including uwishunu, this chicken looked terrific. I needed this chicken. Lucky for me, the boyfriend was getting in to Philly on Thursday, and we needed dinner plans.

I was a little worried because I had taken a peek at the Meritage Twitter feed, and it looked like the chicken special had run out around 6:30 PM the previous Thursday. I know this has also been a problem at Resurrection Ale House. I kept my fingers crossed that they made extra this week so we could experience it- our reservations were for 8 PM.

When we got there, they told us our table wasn't ready, and had us sit at the bar for about 20 minutes, which never pleases me. However, the restaurant is small and it WAS very busy- all the tables were full when we were seated, including the tables on the sidewalk outside. This is another restaurant that has a very "homey" feel which I always enjoy- casual and comfortable. We immediately told our waiter that we wanted the chicken special, lest they serve the last one to someone else. My date did notice a few other things on the menu that he wanted to try, but I insisted that we get the chicken.

We opted to start with an appetizer, and I thought the tempura eggplant ($5) sounded like something that would go well with the Korean theme. Although this appetizer was good... it wasn't eggplant. Long strips of quartered zucchini were lightly fried and coated in a sesame sauce. The zucchini was soft and the batter gave it a little more texture and a salty flavor. The sauce had a bit of a spice to it but we didn't really notice it till we got to the bottom of the pile where it was a little thicker. Overall, a good snack to munch on while we waited for the highlight of the meal. 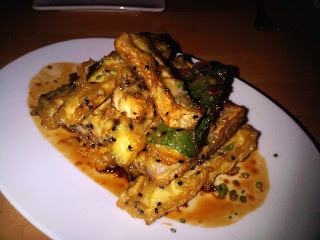 The chicken special is served with a coleslaw as well as some pickled vegetables ("Americanized kimchi" according to my boyfriend). There are 5 large pieces of chicken- plenty of food for two, all for $25. The chicken was even better than I had imagined. All white meat, with a crispy skin, a tangy, slightly sweet, slightly spicy sauce and some crunchy sesame seeds. There was one leg that I snagged for myself, but the rest of the meat seemed like chicken breasts- some of which had no bones, maximizing our juicy, perfectly cooked chicken consumption. The combination of the amazingly flavorful chicken with its sauce-soaked skin... we were incredibly impressed. The sides weren't noteworthy- a few slices of carrot and daikon as well as cauliflower and some steamed greens had a light pickled flavor with a touch of sesame. The coleslaw was very plain, crunchy with the primary flavor being cilantro, which neither of us enjoy. Not particularly wonderful. 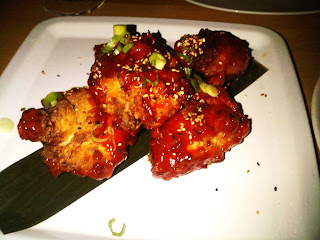 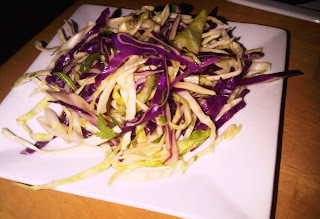 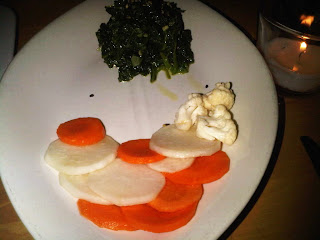 Overall the meal was an amazing deal. We peeked at the dessert menu, but nothing seemed to snag our attention. Plus, we were still in a state of bliss from the incredible chicken. The first thing I did after we finished eating was text A and tell her how good the chicken was. We absolutely have to get this special again before its over at the end of the summer.. and you should too!