This past week I was on a dining quest: find a reasonably priced brunch at a nearby, quiet, "romantic" restaurant. My boyfriend and I were celebrating three years together this weekend, and since he was taking me to dinner (we experienced some "melting pots" together), I decided to extend the celebration as an excuse for another decadent meal. After some trolling around online (thanks, Philadelphia Mag!) I decided on Tinto.

I think it's fairly obvious that we are Jose Garces fans, but I have never had brunch at any of his restaurants- even more incentive to check out what he's got. We have eaten at Tinto once before, thanks to the parentals, and I remember loving the meal but feeling a sense of disappointment from the 'rents. Which may be why we've never returned? Yet another reason why I was increasingly excited about this meal. Oh, wait... and one more thing. While it has not always been this way, Tinto currently offers a pre-fixe brunch- no other options. I've realized I kind of have a "thing" for fixed price meals. When I dine out, I often struggle to make decisions on what to order based on three questions: What do I truly want to eat? What offers some sort of value in terms of health/nutrition? How can I minimize the damage to my credit card? These three questions come into play at different strengths depending on a variety of factors (How hungry am I? What else have I eaten that day? Which dishes have been reviewed positively? Am I prepared for a monetary splurge? I could go on...) Fixed price meals remove one of those questions-- I know exactly how much I will spend regardless of what I order.

The restaurant was fairly deserted when we showed up (reservations completely unnecessary, unless you are, like myself, trying to rack up points on OpenTable), somewhat upping the romantic factor. Our waiter was very nice and attentive, and knew the menu well, and as it was a quiet morning, we had constant water refills and speedy dish clearance. But, service is really never an issue at a Garces establishment.

The menu offers choices for three courses, plus an additional "side" to come with the second course. The first course (breakfast appetizer? I like it) had a handful of options, of which I really had no problem choosing from. The Cured Salmon Plate was a wonderful take on a classic breakfast dish: bagel, cream cheese, and salmon. The "bagel" was actually a bialy, which I am informed by Wikipedia is a Polish take on the bagel, prepared slightly differently. The boyfriend commented that it was a mix of a bagel and an English muffin- much flatter than a typical bagel and with a rougher consistency. For such a flat pastry, it was quite chewy/doughy, and a perfect way to transport the other items on the plate into my mouth. I topped one half of the bialy with egg salad- which at first I thought was hummus, as it is blended to a slightly grainy paste. It was a bit bland, but topped with sliced tomato, made a good open faced sandwich. The other half of the bread I reserved for the chive cream- whipped until it was spreadable but still softer than cream cheese- the house-cured salmon, and the rest of the tomato. Perfection. The salmon portion was admittedly small, but for my first course, it was just right. 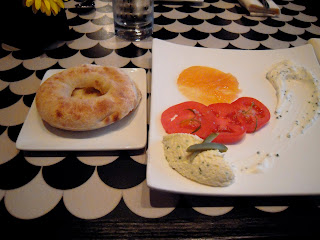 My dining mate chose the homemade granola, served parfait-style with yogurt and seasonal fruit- in this case, assorted berries. The granola was mostly reserved at the bottom of the glass, making for a bit of a dry finish, but the bite I had was delicious- the granola had good chunks, sugar coated nut (pecan?) pieces, and in my opinion, was almost dessert-like with the sweet creamy yogurt. 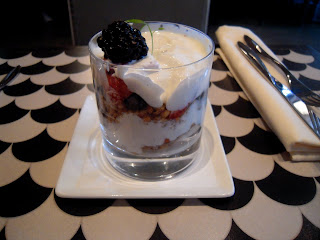 The second course is very heavy on the egg and meat options- not vegetarian or vegan friendly, thankfully not a problem with us. I chose the "Padre y Hijo," a clever name Garces enjoys to describe the meat and egg of the same animal served together. At Amada, he has a dish named "Madre y Hijo" (I believe), which involves chicken and egg. I remember this dish distinctly, as it is the single best chicken I have eaten to date. When I saw the option with a similar name, but replacing chicken with duck, I chose it immediately. It doesn't hurt that duck is possibly my favorite meat. The dish comes with an impressive number of items- crispy duck confit atop a bed of "catalan escarole", as well as a pile of "Tinto Hash" topped with a duck egg, sunny side up. Eating a bite of this, and a bite of that, it was definitely an edible experience- so many textures, flavors, and possible combinations. The duck was cooked to perfection, coming apart easily with my fork. The fat content of duck makes it automatically moist and flavorful, so you really can't go wrong. The escarole was my least favorite part- braised in a vinegar sauce with pine nuts and currants. Currants kind of scare me, as they are so similar to raisins, and I mostly avoided them. The escarole lost its bitterness during the cooking process but was then overwhelmed with the vinegar. I appreciated the addition of greens to my plate, but I didn't appreciate this particular take on them. The potato hash and egg combo, however, hit the spot. The hash is featured in many of the main plate options, and is a good take on the classic hash brown- crispy small chunks of potato and onion created a good base for the runny egg yolk. A duck egg isn't much different from a chicken egg- slightly larger yolk, but similar flavor. 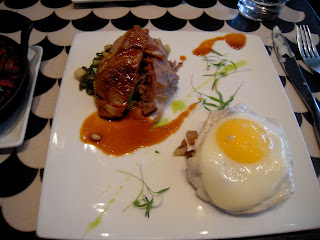 My boyfriend decided on the Brioche French Toast, which I didn't get the chance to try (I'm not a huge French Toast person), but it looked delicious. The bread is thick and chewy, not crispy, but he thought it could have used some more time in the pan. It is accompanied with orange marmalade, a little drizzle of orange spiced syrup, and honey mascarpone. I tasted the mascarpone and almost stole the whole pile- very rich and smooth. He also thought it could use more syrup- maybe a tad bit more moisture from something- to even out the fluff of the bread. He also laughed at how the dish (along with his side of bacon) was sprinkled with microgreens- he jokingly wondered if it was prepared outside. 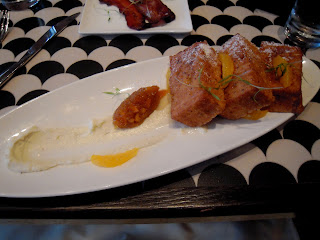 The second course came with a side- classic options such as bacon or chorizo, more interesting options such as maple grits and grilled asparagus, and puzzling options such as piperade. The one question I posed to our waiter- what is this? He explained it as a saute of tomatoes, peppers, and onions, sweated together but not "stew-y." I was sold. I'm glad I asked- it was one of my favorite parts of the meal (but really, they all were). The veggies were finely sliced so that just a quick saute left them soft and flavorful. Slivers of some kind of salty meat were intermixed, providing further depths of flavor. Perfect with a bite of egg, or a few strands of duck meat. 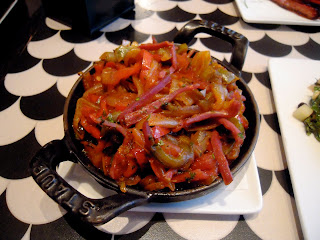 The final course: dessert! Even better than a breakfast appetizer is breakfast dessert. Tinto provides two options: Gateaux Basque or Brulee of Grapefruit. The boy chose the more "dessert-y" one, and I chose the grapefruit. The "Gateaux" were two small, very dense and soft cakes with a slight almond extract flavor, served with a dollop of pastry cream and black cherries. He loved them, but I'm glad I went with the grapefruit. 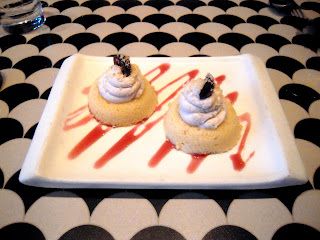 For some reason, I was thinking I would receive a grapefruit flavored creme brulee, so I was a little surprised when half of a grapefruit appeared on the table. My misjudgment was not unappreciated, however; the grapefruit was first expertly cut so that each segment was easily pulled from the outer rind, and then bruleed to a caramelized sugar crust. Each segment had a little "hat" of crispy sugar which offset the sour grapefruit flavor without completely covering it. I would eat grapefruit for every meal if it was prepared this way! It was served with a tall, thin glass of "creme fraiche gelato with olive oil espuma" (foam), but frankly, it tasted like a vanilla ice cream float- a little fizzy on the top where the foam sat, and- I could have sworn- flecked with vanilla beans throughout. Regardless, it was delicious, and I used the special tiny spoon to scoop out every last bit. 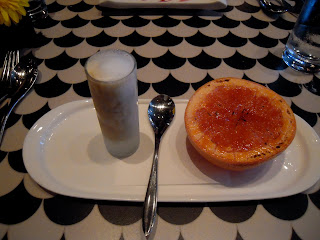 Overall, this was, in my mind, a perfect meal. A quiet, upscale restaurant where I am "forced" to order and enjoy 3+ courses of expertly crafted foods for a single, relatively inexpensive price ($25/person)? Sign me up. Just as J wants me to accompany her to try the Korean Fried Chicken at Meritage, I hope that one day she will come back to Tinto with me to enjoy an indulgent Spanish brunch.