Jake's Sandwich Board has already made an appearance on our blog, providing a fix for our sandwich cravings in the past. Though not our favorite sandwich place in the city, Jake's recently unveiled a new item on the menu that intrigued us: the 5-pound Philly Challenge. Five whole pounds of classic Philly food for $34.95, or free if you can manage to conquer it in 45 minutes or less, by yourself. Of course I know the capacity of my own stomach and would never attempt this feat alone, but, with our mission to "eat Philly", we knew we had to somehow experience this for ourselves.

Luckily, we have a good friend who enjoys food as much as we do and happens to have a wing eating competition win under his belt (no pun intended). We figured between the three of us, we could easily take down the following:

As Jake's requests 24 hours notice for this event, our friend called in and let them know we would be splitting it- no official timing needed as we would obviously be paying for it. At this time he also picked pork as our meat-of-choice, complete with shredded sharp provolone and sauteed spinach. A ordered this sandwich in the past, and our memory of it deemed it the best option for mass consumption. We also got to pick what type of TastyKake's we wanted to eat. A & I don't have a ton of experience with TastyKakes (not exactly the healthiest thing...) so our friend chose his favorite: Butterscotch Krimpets. Obviously our general healthy eating mantra was going to be thrown out the window for an evening.

We arrived at Jake's on a weeknight at 7 PM- it was generally very quiet while we were there, and the two employees were incredibly accomodating, even offering to put on some "eating music" of our choice. It took about ten minutes to get everything together and on the table, and at this point, a small pang of concern hit me: the sandwich was HUGE. This wasn't a standard Jake's sandwich... they pack three pounds of meat into the two foot long roll. We had the sandwich cut into sixths for ease of eating, and supplied ourselves with forks, plates, spicy mustard and lots of water. The timer started and we began eating. 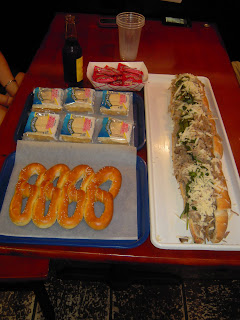 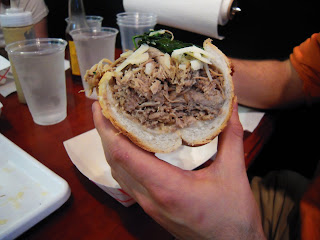 With 24 Peanut Chews to eat, we knew we should spread them out over the meal, so this is what we started with. With our love of pretzels, we also began to tackle this portion of the challenge. However, one of the employees gave us some important advice: eat the sandwich first. As a male and previous competitive eating partaker, our friend knew he had to take on more than his share of the sandwich. He probably ended up eating a little less than half of it, which was certainly the hardest part of the challenge. A took on more than her share of the pretzels as well as the soda, leaving me to help out with the TastyKakes.

As I ate my portion of the sandwich, I intermixed it with bites of pretzel and more Peanut Chews. The Peanut Chews were probably my favorite part of the event- chocolate covered peanutty rectangles of goodness... A agreed that we probably enjoyed them a little too much- we don't typically gorge ourselves on candy. I began to feel full towards the end of my sandwich- thankfully I was eating the "butt" end of the sandwich, so I got a little less meat and a little more bread. 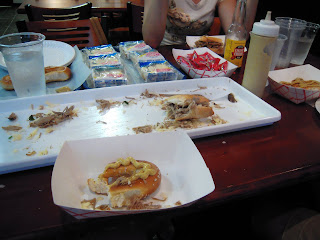 As A finished up the pretzels I ripped open the first package of TastyKakes. These are a little like Twinkies but more dense and without filling. The cakes themselves were ridiculously moist- I actually blotted one of them on a paper towel and was a little disturbed by how much grease came off of it. The butterscotch flavored icing is insanely sweet- A actually had difficulty eating them- she thought it was overly sweet to the point of "cloying". I, however, had no trouble polishing off my share, and then some.

Finishing off the sandwich proved difficult. As A & I made a huge dent in the rest of the food while our friend slowly worked his way through, there was an increasing number of breaks as he came to the end. We saved him a few packs of the Kakes to finish off with and slowly munched through the last of the Peanut Chews. We were certainly all in a great deal of pain at this point. When asked "How does it feel?", A simply groaned and said "It hurts!". I stood up to snap a pic of the conquered scene and decided that standing made the intense fullness more apparent. 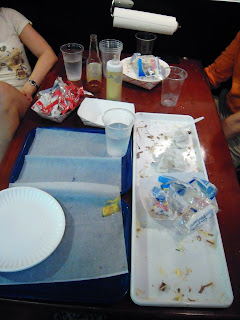 Thankfully we were allowed to sit and bask in our success as well as fight through the urge to lay down, well past Jake's closing time. I realized that we probably picked the wrong type of Kake's- shouldn't we have gone for the least caloric option? With the Krimpets at a ridiculous 240 calories per pack, I had to make an effort not to calculate the full meal's content. Using my Blackberry to look up lower calorie TastyKake options, I started reading "Low Fat Chocolate Iced Vanilla Cupcakes" (170 calories per pack) and "Low Fat Raspberry Filled Koffee Kake" (180 calories per pack)- A protested this with "Stop saying food items!"

Our final time was 39 minutes- embarrassing considering someone has done this challenge alone in 24 minutes. But it was a lot of fun, and the food was a good range of Philly classics that were very enjoyable (until the end...). We were actually the first to attempt this challenge as a group, but hopefully more hungry friends will consider this as a fun thing to do. On our roll walk home, we decided a fourth eater should have been procured to minimize stomach-exploding pain. So round up your friends and head over to Jake's (but don't forget to call in advance!)