Replacing the standard-but-not-special sushi restarant Misso, Muntin is a promising Pan-Asian fusion-esque restaurant just a hop, skip and a jump down Spruce Street from where we live. Recently reviewed by Philly Weekly and with 4.5 stars on Yelp, Muntin seemed like a tasty new addition to the neighborhood. Written a mere two weeks ago, the PW review promised me a delicious meal of scallion pancakes and crispy red snapper. Looking for a casual place to have dinner with friends before catching the Phillies/Eagles games on a Friday night, Muntin hit the convenience, price range, and fresh-face trifecta that we are constantly seeking out.

Or so we thought... Arriving at around 7 PM, we found that the only real change from its predecessor was a different name and a cute pagoda style logo. Identical decor, the same smooth jazz, and very quiet- only one or two tables of diners. Seated at a table in the window, we were informed that Muntin had recently come under new management, which corresponded with a "different" menu. Not thinking much of it, we settled in and began to check out our options. At this point, we quickly realized that the new management had reverted Muntin back into a more expensive version of Misso- the menu was very short, consisting of 95% sushi and 5% unoriginal and overpriced entrees. Unfortunately for us, no one thought it might be a good idea to change the online menu, luring us and other unsuspecting diners into their trap.

At this point we could have chosen to leave, but our server swiftly brought out water and some complimentary edamame, making an early departure difficult. We decided to forgo the awkwardness and give the food a chance. I started with the "Hasu salad"- mixed greens with goat cheese ($10). While the price was a little steep for a simple salad, it was actually quite tasty. The greens were fresh and the vinaigrette light with a hint of ginger. The goat cheese was served as three flattened-golf-ball-sized chunks, deep fried to provide a crispy casing around the creamy cheese. These were reminiscent of the goat cheese "crouton" at City Tap House, and equally as enjoyable. Still not quite worth a ten spot though... 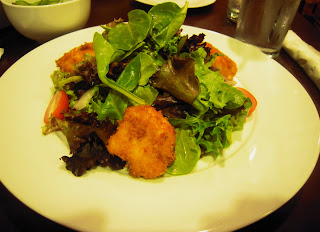 A opted to start with a spicy tuna roll ($7). Standard mix of spicy sauce and mushed up tuna bits, it was a little on the boring side. Not that we have any reason to expect anything more, it was just plain old sushi. 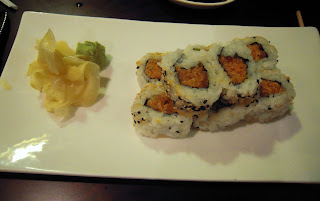 Our table split the fried calamari ($10) as our go-to favorite. As a general indicator of restaurant quality, Muntin missed the mark on these big time. Very thin rings of calamari had a greasy and out-of-a-box uniformly colored look. Served with a side of mayonnaise with a splash of soy sauce for dipping, the overall presentation was unappetizing and the taste mediocre. 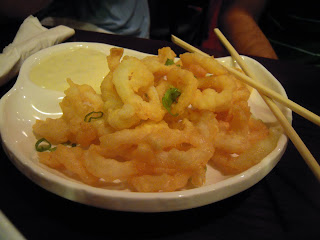 The one true positive note of the meal was the "Sashimi Regular" ($20), which A and I split as our entree. Eighteen generous pieces of sashimi satiated my need for raw fish. Though the menu advertises this as a "chef's choice", the types of fish were never revealed to us. However, even our amateur eyes picked out salmon, yellowtail, and at least two cuts of tuna. The other two types remain a mystery... Overall we felt the quality of the fish was good and the portion well worth the price. 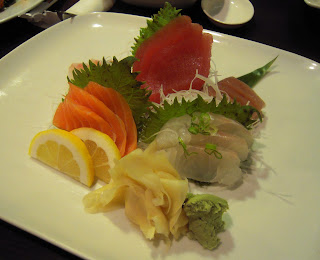 Vastly disappointed that we missed out on some potentially delicious Asian fusion cuisine, our trip to Muntin was not at all what we were expecting. The PW review highlighted the general quietness of the restaurant- not typically a good indicator for success. Unfortunately, Muntin is now just another second-rate sushi joint. I do have to point out the quality of the service- our three servers really had nothing better to do than be at our beck and call. The food came out quickly, but again, those sushi chefs had only one or two other plates to fill. Otherwise, our stop at the nearby Rita's for dessert was more of a culinary excitement.