Somehow, growing up in the midst of North Central Florida's abundant farmland, we never took the opportunity to go to a "U-Pick-'Em"-- basically, a farm where instead of migrant workers doing all the work, YOU do all the work. We became minorly obsessed with this phenomena in college when we were introduced by a friend to apple picking near his hometown of Providence, Rhode Island during a fall break. Crisp weather, beautiful colors, the fun of wandering amongst apple trees- plus all of the delicious apples you can pick- really, what's not to like?

We then sought out our own local version-- Linvilla Orchards. Located about half an hour outside of the city, it offers apple picking for several months during the fall. However, for much of the rest of the year, you can get your fill of plucking your own produce straight off of the tree/plant/bush at Linvilla, depending on what is in season. This past weekend marked the "Peach Festival" at Linvilla, basically the height of peach season, with plenty of peaches for the picking. I coerced a few friends to join me, and while the festival wasn't nearly as big as the annual Fall Festival (complete with pumpkin patch), it was still an entertaining experience. The peach orchard is located a short distance from the center/parking area, requiring a short hayride to get there. From there, the tractor pulls you to the pond (for anyone interested in fishing from a stocked pond) and then on to another field where peppers/tomatoes/grapes/eggplant all grow nearby. There were several pepper varieties to choose from, as well as both grape, plum, and regular sized tomatoes. Everything was a single base price per pound (about $1.50), or you could load your little box as high as possible for a single set price. 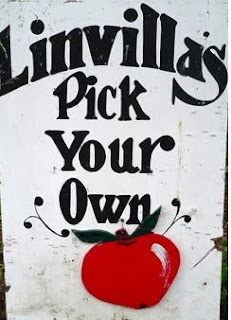 We ended up with about 12-13 pounds of peaches (with a few tomatoes and peppers thrown in there), of which I took ten pieces. I knew I could probably eat ten peaches in about a week or so (between J and myself and a few guests we were expecting), but figured I'd make it a little easier on myself by baking some peach goodies. However, it seems that most peach-based baked goods are pies and cobblers- both of which I've tackled recently. So I searched some more until I found a good substitute- peach cookies! 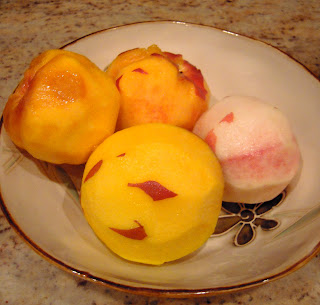 Three yellow peaches, and one white peach were used in the production of these cookies.

The recipe, found here, is as follows:

Preheat the oven to 375. Peel and dice those peaches, and then sprinkle 2 tablespoons of the sugar over them, stirring to combine evenly. Combine flour, the rest of the sugar, nutmeg, baking powder, and salt in a large bowl. The recipes calls for 2 cups of pastry flour, which I didn't have on hand. Pastry flour is low in protein (8-9%) and gluten, which lends to a softer texture than using all-purpose flour (10% protein). I assumed bread flour was similar-- however, it is not. It in fact has a HIGHER gluten and protein (12-13%) content than regular flour. Whoops.

"Cut" in your butter (or mix in however you like to do it, pastry blade, two knives, with your fingers, etc.. just get it incorporated!). The flour to butter ratio is pretty high, so it should incorporate quite easily. Next, carefully stir in the heavy cream. At this point, I made a fatal mistake. As I mixed the cream in, the dough began to form, but remained crumbly and dry. My solution? More cream. I added a dash here and a dash there until I formed a heavy ball of dough. Someday, I will learn to follow these recipes exactly. 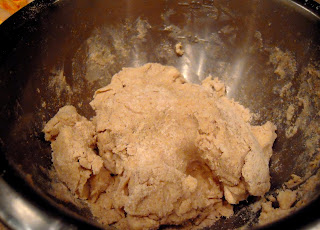 Then, I added the peaches. The added sugar had begun to bring out the water in the fruit, making this a considerable addition of liquid. The soft, juicy peaches did NOT want to mix with the dense dough, therefore requiring lots and lots of mixing. The more mixing you do, the worse your final product will be. Fact of baking (at least for soft pastries). 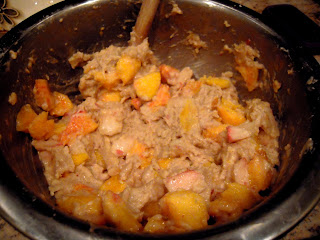 My final dough product was a bit of a wet mess, making the portioning out of cookie sized balls a two-handed task. I formed the balls out of 2-3 Tbsp. of batter, but if I was to repeat the recipe, I would err on the smaller side. Particularly because of the large moisture content, the cookies flattened and spread during the baking process, leaving me with a pan of smushed together cookies. Sigh. I baked them for about 25 minutes, until the bottoms began to brown and the tops were nice and set. 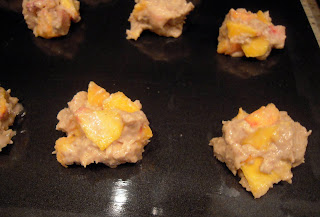 Thankfully, while the final product looked nothing like what I imagined, they tasted delicious! The peaches had cooked to the point that they reminded me of those in a peach pie- soft, sweet, and still quite juicy. The dough formed a very soft base, which my boyfriend compared to the fluffy texture of a pancake. I'm not sure I would eat these for breakfast, but he may be on to something. 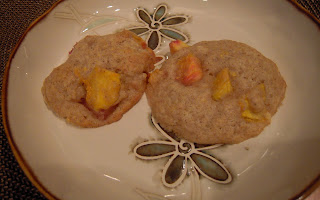 I definitely intend to make these again, and next time I will make some adjustments- stick to the 2/3 cup cream (and perhaps substitute light cream or half and half), use pastry flour (although my final product was soft, this was due to my inability to follow directions), and perhaps use cinnamon as well. The nutmeg gives the cookies a distinct spice, and while I enjoyed it, I think the flavor would be more balanced by the addition of cinnamon. Also, I would refrigerate the cookies after cooling them. The moisture and sugar in the peaches simply screams for mold to grow on them, leaving them inedible in just two days time.

Hope all of you are enjoying the fruits of summer!