The recent creation of websites such as Groupon and Living Social is (in my opinion) a true stroke of genius. If you aren't familiar with these sites, you should be. The basic premise is that the managers of each site partner with various companies throughout each host city in order to provide customers with deep discounts while guaranteeing the businesses more customers. Each day, I receive an email from both of these sites (although there are a number of new ones popping up all the time), each advertising the "Daily Deal." These deals usually provide 50-90% off of some sort of good or service, ranging from spa or salon services, restaurant gift certificates, coupons for yoga classes, and even a sky-diving discount. You purchase the coupon at the advertised discount, and if a certain number of customers also purchase the deal, it's "on"-- basically ensuring that the company advertised each day will receive a pretty large influx of customers (I think every deal usually gets plenty of buyers!)

Anyways.. while I enjoy getting these emails, I have only found one that I just HAD to have. The coupon offered $50 of food and drinks at Mango Moon, a Thai restaurant in Manayunk, for $25. Since this is a restaurant I've been meaning to visit, I jumped at the chance to go and eat at a 50% discount. This restaurant, as well as it's sister restaurant Chabaa Thai (just down the street from Mango Moon), have received consistently good reviews, and the general concept is enticing- according to the website, "It's Bangkok streetfood without a map." Also, the chef/owner's name is Moon, which I find both odd and awesome. 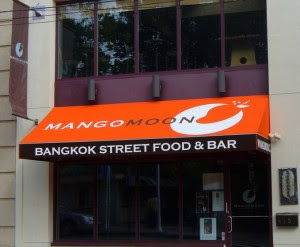 J and I made reservations just a few hours before we showed up, but then were at the mercy of a stalled SEPTA train (thank you, SEPTA, for being 30 minutes late). Thankfully we planned in plenty of extra time, and showed up a bit before our reservation. The hostess was very accomodating, and even sat us next to the large window upstairs (did she know we wanted good natural light for taking pictures?). The upstairs of the restaurant also holds the bar, and the bartender ended up doubling as our waiter- which meant he was always close by!

The majority of the menu consists of small plates- which makes sense if the restaurant is focused on street food. We decided to stick to these options and pass on the larger entree size portions (which also served to maximize our sampling of the menu with our $50 budget). We ended up ordering five small plates and one "side," which our waiter deemed an acceptable amount of food. The dishes were brought basically in order of how they appear on the menu, which is a little odd, but perhaps just a coincidence. First up, Meang Khum. Oh right, I don't speak Thai... this dish is translated as "Roasted Coconut in Green Leaf" ($8). It almost reminded me of the array of small bites that come at the beginning of a Korean meal- a variety of little bits of food in tiny bowls, accompanied by a quarter of a head of iceberg style lettuce. In the bowls were: toasted coconut, small slices of lime, roasted peanuts, minced ginger, red onion, sliced Thai chilis, dried shrimp crumbles, and a sweet syrupy sauce. Each component is sprinkled into one of the lettuce leaves and then wrapped up into a little bundle. There were SO many components, but they all came together to form a really lovely start to the meal- crunchy, spicy (those chilis are HOT!), sweet, and savory, somehow all in one bite. 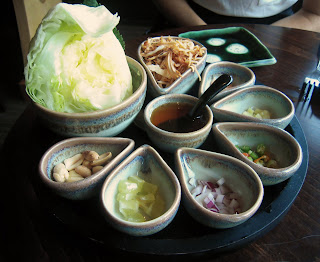 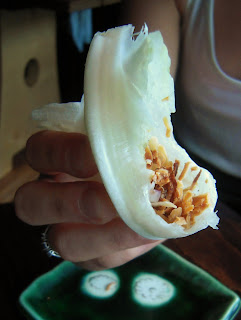 Next up was the Taro and Tofu Combination ($6). A bit of a change of pace from the light lettuce wraps, this consisted of long thin strips of both taro and tofu, battered and deep fried. The smell reminded us of carnivals and fried Oreos- definitely fresh out of the oil. They were crispy, steaming hot, and delicious. It came with a small side of a sweet peanutty sauce, but I continued to use the sauce from the first dish to dip things into throughout the meal (it was so good). I preferred the taro pieces to the tofu- taro has a consistency much like a potato, lending a soft texture to the fried strips. The tofu was a bit tougher (although still plenty soft!), and perhaps a bit gummy. While we liked this dish, it was a little heavy and we were unable to finish them all. 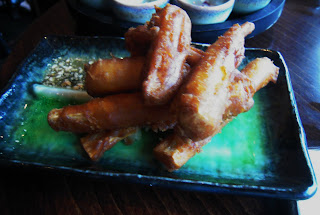 Our third option "From the Cart" (assuming this is in reference to a street food vendor's cart?) were the Spicy Bangkok Wings ($6). Basically, a Thai take on classic chicken wings. The pieces are first marinated, then fried, and finally tossed with a spicy sauce. The flavors were definitely apparent- no dry and tasteless chicken here. The sticky sauce made them very messy, but our waiter preemptively provided us with wet wipes prior to the next dish's arrival. 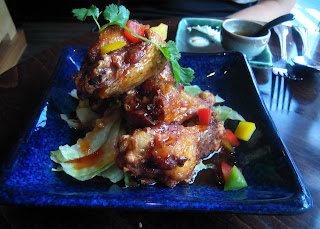 We then moved onto dishes "From the Boat." First were the Steamed Clams with Sweet Basil and Lemon Grass ($9), which were accompanied by our side selection of Roti Bread. I actually ordered the bread hoping to use it as a dipper into the clam juice, and while they were served together, that didn't quite come to fruition. The clams were our least favorite of the meal- weak flavor, a good amount of grit in several of the shells, and strange bark like items that poked the inside of your mouth and were unchewable. I wanted to spoon some of the broth up to taste, but it was always accompanied by these "sticks", or large pieces of cilantro (not our favorite), or large slices of what looked like whole ginger root. However, it tasted and felt nothing like ginger- and according to the menu, is actually "galangal root," a cousin of ginger with a different flavor profile and a very tough texture. Biting into it is like eating tree bark. Highly unrecommended. 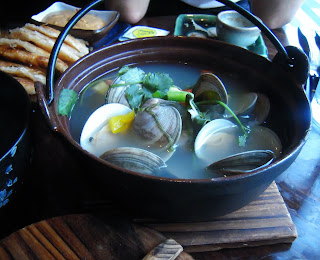 When we ordered the Roti ($3), our waiter got really excited- apparently it's one of his favorites. When I think of roti, I think of an Indian style flat bread, very similar to both pita and naan. At Mango Moon, it's more like dessert. Folded slices of a pastry-like "bread" were served with a spicy aioli for dipping. Each slice was limp due to the high oil:flour ratio- literally these things were total greaseballs. I mean, they were good, but I could feel my arteries clogging. The exterior of the bread is crispy and multi-layered, sort of like phyllo dough. The interior is doughy and chewy, kind of like a thick, raw pie crust. Interesting to say the least- not what we expected, and I would have preferred the bread in my mental image, but we weren't overly disappointed. 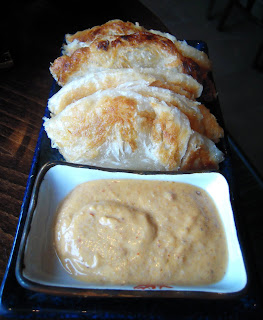 Our final dish was the Spicy Salmon ($9). This was somewhat of a take on a salmon salad- the base consisting of shreds of shallot, ginger, mango, mint, and cilantro, tossed with a thin chili-lime dressing and topped with tiny bites of lightly fried salmon belly (think salmon tempura). This was one of our favorites of the meal, and we were happy to end on it. All of the flavors were fresh, the shredded components were nice and light, and the salmon was tender and not too greasy and heavy. In accordance with most of the dishes we consumed, the portion was small but shareable. 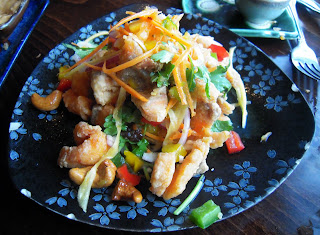 As we wrapped up our meal, we realized that we wouldn't be spending our full $50, so decided dessert must be had. The options were scarce (ice cream, sweet sticky rice, and yellow bean custard), and we chose the "safest" option- coconut ice cream. It was served in a real coconut shell, absolutely jam packed in, and sliced perfectly in line with the top of the makeshift bowl- simple but actually pretty impressive. It was a good, cool ending to the meal, not too sweet and still reminiscent of the flavors and ideals of the restaurant. 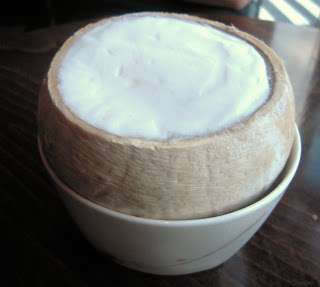 As our check was delivered, our waiter joked that we must carry a calculator-- we "spent" exactly $50, requiring us only to leave a tip. While we had paid the $25 when we purchased the coupon, it almost seemed like we were getting a free meal! Nonetheless, $25 + tip still equaled an excellent deal. We were able to try a new restaurant, order a good variety of dishes, and keep our bank account happy- leaving us very satisfied. If I lived in the Manayunk area, I would probably visit Mango Moon on a more frequent basis- but I don't see it as a place worth the additional transportation hassle (and cost!). However, on our walk back to the train, we passed by Chabaa Thai-- and now we're thinking we might just need to try it as well.