The title of this post is a little misleading because the food we made involved very little actual cooking. After perusing the Saturday morning Rittenhouse farmer's market a few weekends ago, we saw a few items that inspired us: green tomatoes and cucumber pickles. Fried green tomatoes are considered somewhat of a "Southern delicacy" and it's relatively hard to find them in this city- our best success with them was actually in DC.

As you know, when A & I were growing up, our Dad was the cook in the family. However, there were certain times of the year when he would get home late and making dinner would fall into the hands of our Mom. She also worked late into the day, so she would sometimes pick up "dinner" at a produce stand near the interstate. But this wasn't just any produce stand... they also sold boiled peanuts, another purely Southern treat. A giant Styrofoam cup full of the salty, softened peanuts (still in the shell) paired with perfectly ripened red tomatoes and a banana, and we were happy campers.

Another kind of food we (OK, mostly me...) are obsessed with is pickles. I've loved pickles ever since I was a little kid and have a lot of memories associated with them from my childhood. And it's not just pickled cucumbers- pickled okra? Pickled beets? Pickled banana peppers? That last one has my mouth watering... Unfortunately, pickles are a little on the expensive side, and as a non-necessity, we rarely buy them. But seeing a quart of pickled cucumbers at the market for $3 got us thinking... why can't we try to make our own?

The long holiday weekend gave us a little extra time to spend in the kitchen, so we decided to tackle all three of these items at once. The farmer's market had perfect green tomatoes (picked that morning!) for $2.50/lb, and I was instructed to store them in the fridge to keep them from ripening- a helpful hint considering you should NEVER refrigerate ripened tomatoes. I also picked up a pound of raw peanuts in the shell ($1.50 at Nuts to You on 13th and Walnut) and an oversize quart of the cukes- lots of food for less than $10.

A took charge of the peanuts: Place peanuts in pot. Add 1/2 cup kosher salt and enough water to cover the peanuts. Turn on the heat until the water begins to boil, then let them simmer/slight boil for a long time. Not hard. Keep an eye on the level of the water as it can boil off pretty quickly- keep adding water as necessary. The recipe A used suggested boiling for three hours, but we probably would have liked them to go for longer- this really depends on your softness preference. We're more on the mushy side of the spectrum, while these turned out firm (but still delicious!). They are definitely on the salty side so perhaps next time we'll tone that down a bit. These are a great summertime snack and can be eaten either hot or cold. Add some spices to the water to make a Cajun version (a crab boil spice packet would work well). You can store them in the refrigerator for a few days as well (a pound of in-the-shell-peanuts is more than you might think...). 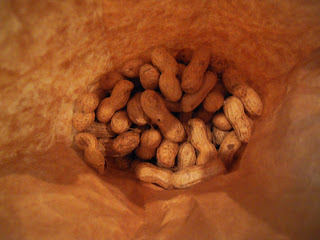 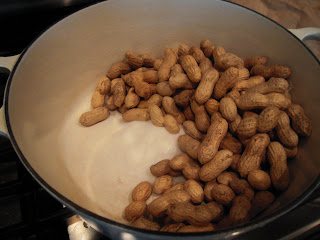 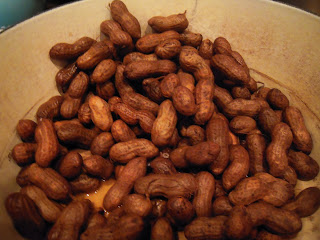 Eat the peanuts just like you would a roasted one at a ball game. Crack open the shell (though this is more of a mushing/prying type maneuver), and pluck out the nuts. They have a consistency similar to that of a cooked bean.

Because pickles are more my forte, I was responsible for making them. Wash the cukes well and place them in a large jar or sealable container. Add a few pinches of dill, some sliced garlic, and a white vinegar to water ratio of 3:2 until the pickles are covered. For each 1.5 cups of vinegar, add 2 T of sugar and 1.5 T of salt (I know that requires some math... sorry...). Seal the jar and shake everything well. Pop them in the fridge for at least 24 hours, though again, I think they require more time. We're going on two days now and the pickles are at "half-sour" status. Very crunchy, totally fresh, garlic-y and dill-y.. and homemade! Again, a super easy snack that can keep in your fridge for awhile, I think a couple of weeks, but only time will tell. Until then, you know what they say: A pickle a day keeps.. me very happy! 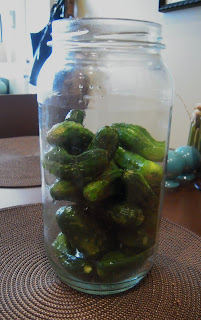 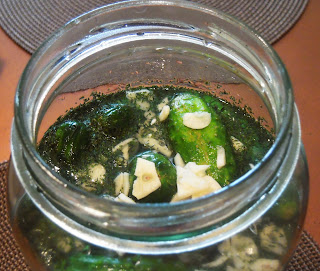 The fried green tomatoes took a little more effort. We like the slices to be super thick to get some good crunch action- green tomatoes have a totally different texture than ripened tomatoes (duh). We rubbed our tomato slices in a little whole-wheat flour then dredged them in egg-whites and a cornmeal/panko mixture. Heat a good bit of canola oil in a frying pan (enough to cover the pan well) and cook the slices for about 5 minutes on each side. A made an accompanying "dip" made from plain Greek Yogurt and some red pepper spread from Trader Joe's. The tomatoes were unbelievably good- crispy, crunchy, cornmealy, a little bit of fried flavor yet still maintaining the tangy, almost-sour taste of the tomato. The cool and creamy yogurt spread was the perfect addition. 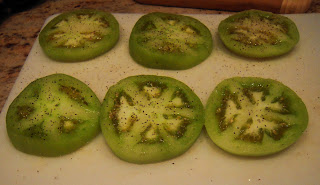 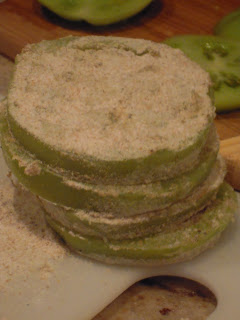 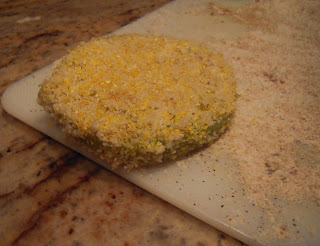 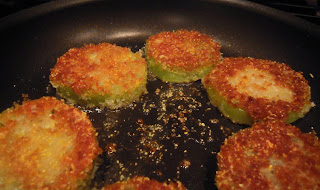 With a big bowl of fresh fruit salad, these made a rather eclectic yet delicious Southern meal- a good way to celebrate the 4th of July. Although some of it took awhile, none of it was difficult- and we certainly have enough peanuts and pickles to last us awhile. 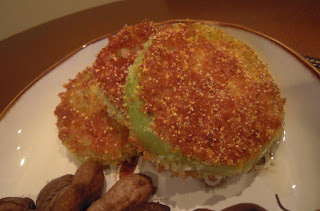 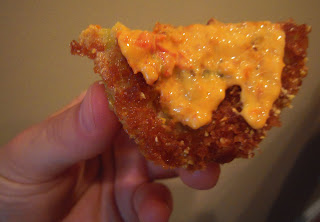