We've just returned from summer vacation #1, another weekend trip to Nashville, Tennessee. We had so much fun on our last trip that we almost immediately began making plans for another visit. There are too many great things about "Nashvegas" to count, but one of the things we love the most is exploring the city through food. Our friends there have really done an excellent job of visiting the huge variety of restaurants in and around the city, and keeping tabs on which ones we would love. On our last visit, we sampled the Pancake Pantry and Suzy Wong's House of Yum- both restaurants unique to Nashville. For our second visit, our friends asked if we had any requests of our own, and combined those with their own "must eats."

We arrived early Friday morning (thank you one hour time difference!), and our first meal was lunch. J & I both read a number of "healthy eating" blogs, and one such blogger is based in Nashville. She wrote about one of her lunchtime favorites, and the title of the post itself ("The BEST Fish Tacos") made me need to check out Baja Burrito. Our friends had never been, but said they've been wanting to, so I didn't feel bad forcing the issue.

The restaurant is really cute with funky decorations and plenty of indoor and outdoor seating. At first glance the menu seems fairly typical- tacos, burritos, taco salads, chips and salsa, etc. However, the options are actually fairly extensive- lots of free toppings, tons of different salsa options (all homemade, as are all of their salad dressings), a variety of meat options including brisket and barbacoa (most of which are locally sourced), and unique drinks and desserts such as horchata and Las Paletas popsicles, respectively. Whew!

I had to get a fish taco ($2.45), of course, but decided to sample their veggie taco as well ($2.20). I chose a corn tortilla base, which comes doubled up to prevent tortilla splittage/spillage. The tortillas are filled with beans, rice, and grilled onions and peppers, and then topped with pica de gallo, shredded cheese, guacamole, pickled jalapenos, and cucumbers. Amazing flavor and texture combination. I would have been perfectly content with six more... if I hadn't also tried the fish taco. They really ARE the best fish tacos- perfectly battered and fried white fish cut into generous chunks, mixed with some white cabbage, a white creamy sauce, and some cilantro and raw onion sprinkled on top. Amazing. 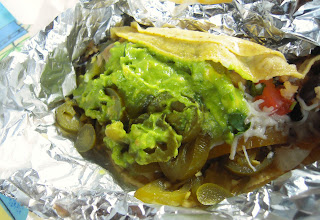 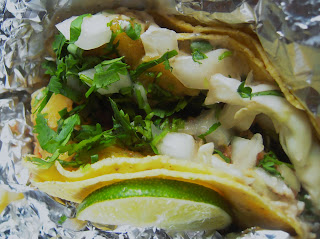 J chose the taco salad ($6.25), topped with barbacoa- a Mexican version of pulled pork. Very finely shredded and tossed in a spicy tomato-based sauce, it was a good addition to the pile of greens, tortilla chips, beans, rice, and other assorted veggie toppings. The chips and salsa were also superb- their thick corn tortillas freshly fried and served with a "salsa bar" where you can pick and choose from a bunch of flavors. The spicy pineapple salsa was one of my favorites- sweet and smoky. We also helped ourselves to a free sample of horchata on our way out (we hope they didn't mind!). It is kind of like cinnamon-y melted rice ice cream... hard to describe. While Baja Burrito is a "one of a kind" independent restaurant, they do have a mini version at the airport- and even though our flight out was relatively early on Monday morning, you know we hit that up. 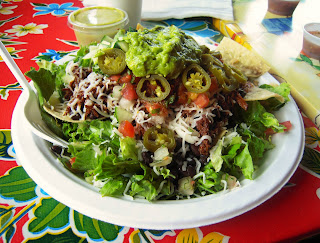 On our last visit, our friends made the most amazingly delicious pulled pork, and as "payback" for coming to visit them again (just kidding- we owe them bigtime!) we pretty much ordered them to make it again. For the record, I tried replicating this dish awhile back, and it sadly came out nothing like their version (I'm blaming the CrockPot). The recipe is actually fairly easy- a 3-6 lb bone-in pork shoulder/butt, a bottle of barbecue sauce (preferably Sonny's), and a white onion. Layer half of the white onion, chopped, at the bottom of a slow cooker, and cover it with sauce. Place the pork butt fat-side-up on top, and again cover with sauce. Sprinkle the remainder of the onion onto the pork, and let it simmer away for 6-7 hours (first 1-2 hours on high, and then adjusted to low). The sauce should be boiling for most of this time, and basting is optional. When you're ready to eat, simply remove the meat from the sauce and "pull it", removing any fatty regions if necessary. The meat literally just falls apart, and is extremely moist- perfect atop a buttered, toasted piece of fresh bread. Bonus points for having lovely house smells all day as it cooks! 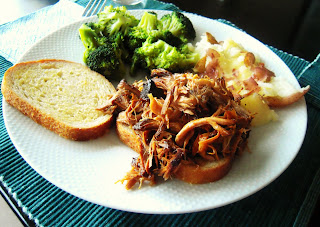 The following day we were joined by our other favorite couple, and we celebrated our reunion at a "Nashville Original." This is a group of restaurants "dedicated to sustaining the independent restaurant as a fixture of Nashville's culture and community." It is quite a varied list, ranging from dive bars to 5 star spots. We picked something in the middle- we were aiming for fun atmosphere, a large variety of food (to suit everyone's tastes), with relatively moderate prices. After much debate and lots of menu perusing, we settled on rumba (no, it is not capitalized). The restaurant describes itself as a "rum bar and satay grill", but I'm not sure that's quite an accurate description. The satays themselves aren't heavily emphasized, and the menu strays from its somewhat Latin roots frequently.

I think both J and I stared at the menu for at least fifteen minutes, agonizing over what to order. We wanted to try a variety of small plates, but the sandwiches and entrees kept calling our names as well. I probably put together three or four different combinations of dishes in my mind, before finally settling on my order. To start, I tried the "Montaditos"- which were essentially tapas built on a bread base. rumba's take on this included three small bites: shrimp ceviche on a tortilla chip, a chorizo mole, and a vegetarian tomato-succotash slice ($4). They were good, a well proportioned start to the meal with a variety of flavors. Worth the $4, but not a highlight of the meal. 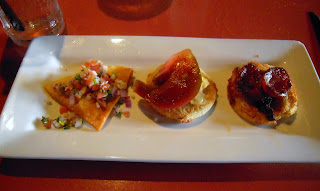 Then, I moved onto the Barros Luco sandwich ($10), apparently a popular Chilean dish consisting of thinly sliced steak, Monterey Jack cheese, sliced avocado, and a spicy bean-like sauce. It was also served with pico de gallo and mixed greens, which I attempted to shove into the already full sandwich. The steak reminded me of cheesesteak meat (in a good way), and the cheese and avocado were perfect accompaniments. The highlights were definitely the bun- thick, dense, Brioche-y type bread, not something I would imagine making a meat sandwich with, but it worked well- and the sauce- thick and spicy, with chunks of hot peppers. The sandwich typically comes with fries, but I traded them out for the couve, a Latin kale dish made by quickly sauteeing the greens with tomato, garlic, onions and lemon juice. Perfectly chopped and cooked, the kale was much more interesting and enjoyable then a pile of fried potatoes. 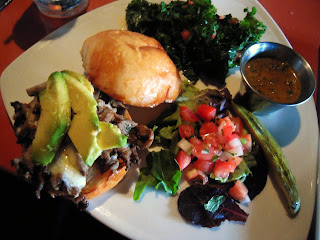 J started with the stuffed peppadews ($4), highly recommended by our waiter, and as it involved goat cheese, she was all over it. Two skewers of peppadews (some sort of small red African pepper) are stuffed with goat cheese and then grilled, with a final dash of chorizo bits (kind of like bacon bits?) sprinkled on top. The peppers were on the spicy side, but this was mellowed out by the cheese. The soft goatiness was heated close to its melting point, maximizing the creaminess. She also couldn't turn down the sandwich options, choosing the Ahi tuna, a thick cut of tuna marinated in jerk spices, topped with an avocado tomato relish. Thankfully, she had the same bun that I did (yum), but the tuna was a little on the bland side- although it was cooked super rare as requested. She ate it openfaced, to prevent the thick bread from detracting from the sandwich innards. She also made a veggie substitution, switching out the fries for the chile-seared broccoli. A huge stem of broccoli was panfried in what must have been chile infused oil, cooked to a soft bite, and then topped with sriracha and crushed peanuts. The double hit of peppers definitely made it quite spicy- again, a quality side substitution. 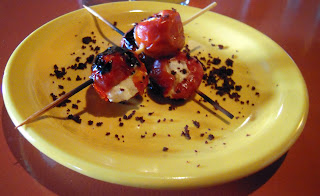 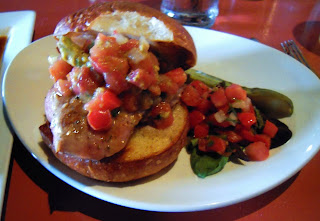 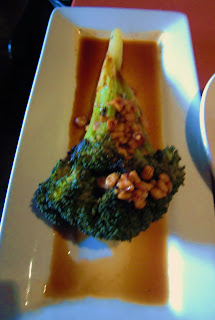 The rest of our dining mates also liked their dishes, and it was impressive to see so much variety on the menu all done well. J and I commented that the atmosphere of the restaurant was a little off- half of it is booths/tables while the other half is more lounge-ish, with couches and low tables. Our waiter, while very helpful and enthusiastic, loved to pop out of nowhere which was a little creepy- I prefer more subtle service. For a somewhat demanding party of 6 though, we were glad to have him.

The following day, our hosts took us to the Loveless Cafe, another famous Nashville tradition. At this point, I remembered that I was in the South- and took full advantage. Nowhere in or near Philly can you find food like this- real, down-home, ridiculously artery-clogging, dripping with oil and butter and lots of love, delicious treats. The Cafe has quite a history, and has turned into somewhat of a production. However, the food remains the same. The menu is full of classic Southern dishes- fried catfish, fried okra, fried chicken livers, barbeque, country ham, creamed corn, mac n' cheese, grits, you name it. Our table started with a couple of baskets of biscuits- small and squarish, and quite notorious. The recipe has been kept secret over the years, and the biscuits have been featured on Throwdown with Bobby Flay. They are denser than the average biscuit, but super fresh and perfect with a little smear of butter and some honey, or one of their homemade jams (I only tried strawberry but it was delish)(Editor's note: the blackberry was also solid). I probably could have had four, but it's a good thing I didn't- my fried chicken lunch was enough food to feed at least two hungry people. 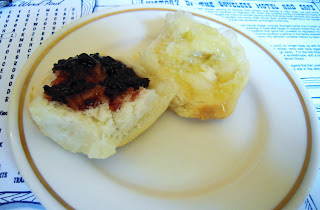 The "supper" meal ($11.50) consisted of a quarter of a chicken (breast and leg) and two sides- I chose coleslaw and macaroni and cheese. J ended up ordering the same thing, with green beans instead of coleslaw. Oh man. I probably gained two pounds from this meal, but it was overwhelmingly worth it. The chicken was steaming hot, fresh out of the deep fryer. The coating wasn't too thick or crunchy, just a thin casing to the meat beneath. Crispy, greasy, and the right way to start a lazy Sunday. The macaroni and cheese was super soft and creamy, but I couldn't make it beyond more than a few bites. The coleslaw, on the other hand, was completely dominated- just the right amount of mayo and tang, chopped to fine bits, making it easy to grab large bites. The green beans were cooked down with a bit of bacon and ham, just as Southern beans should be. I also sampled a hush puppy- I swore I just wanted a bite, but then ended up stealing an entire ball of fried cornmeal dough from my very generous friend across the table. They were super dense and moist- most hush puppies end up a little dry. Overall, the most satisfactory Southern brunch I could have asked for- totally worth the short wait. 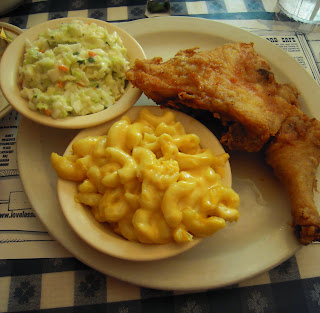 Our first trip to Nashville in March was so much fun I thought we surely couldn't beat it- but I think this weekend may have. Many, many thanks to our wonderful friends and hosts, and we are already looking forward to our next visit.
Posted by Julianne at 4:04 PM