After A & I's earlier experience with the UC Dining Days, we decided to try one of the higher end restaurants- even at $30, some of these places are a fantastic deal. We chose Marigold Kitchen, out in West Philly at 45th and Baltimore. A has previously dined at this adorable neighborhood restaurant, which is built into the end unit of a series of rowhomes. However, there has been a major change in the kitchen since she was last there, with Erin O'Shea leaving to establish Percy Street.

The latest reservation we were able to get on OpenTable was for 6:15, but the dining room was pretty quiet when we arrived. We were seated in the middle of a row of two-seaters, having the area to ourselves until the very end of the meal, which was nice. The decorations are simple but charming, and the white-linened tables were completed by cute bud vases. The water glasses were satisfyingly heavy and the service was superb. Lighting was a little on the low side (bad picture alert!) but made for a cooler atmosphere- a much appreciated respite from the 90+ degree heat outside. Now onto the food...

The meal started with a spoonful of cucumber granita- a refreshing start to the meal- a sort of amuse bouche. A dab of creamy cilantro-tinted yogurt sauce with some crumbly cucumber flavored ice, perfectly seasoned and providing a great contrast of temperatures and textures. This was an appreciated upscale touch to the meal. 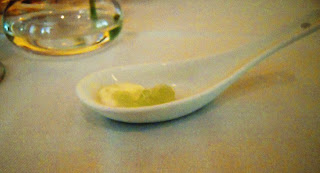 The Dining Days menu was respectably broad- they seemed to serve a good majority of their normal menu, with a few "new" items for the first course selection. I started with one of these atypical offerings, choosing the Champagne Braised Escargot. I don't have a lot of experience with escargot, but this was one of the best appetizers I have had in a long time. Each escargot was about the size of a mussel and actually tasted a bit like mussels (A claimed they were "the best mussels I've ever had"), with an excellent smooth texture and garlic-y taste. There were a significant number of them (maybe 8 or 9) mixed with mushrooms in a lightly creamy sauce heavy on the garlic. At the bottom of the dish there was a crispy round of polenta- this polenta was very airy and seemed more like cornbread. It was also incredibly salty which was the only downside to this dish. The whole concoction was topped with "champagne bubbles" which didn't add much- it actually tasted like a foamy version of the sauce- but the chef LOVES the bubbles- there was a foam topping to many of the dishes we saw coming out of the kitchen. 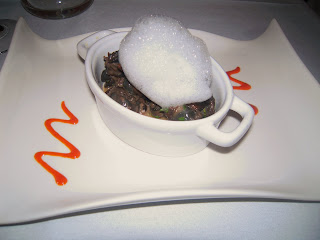 A started with the Peekytoe Crab. This seems to be a popular ingredient for menus around the city this summer- a soft shell crab from Maryland, as overheard from our waitress. Served in a layered fashion atop a diced mango salsa, the crab was chopped and mixed with cucumber and bits of peppers, making it more of a crab salad. The crab itself wasn't all that flavorful, so it could have used a little something to boost the flavors and balance the sweet mango. This was topped with crispy fried shallots, and served alongside a couple of interesting accompaniments. A chunk of heart of palm was cored and filled with a small bundle of bitter watercress, making a cute little bouquet on the plate. There was also a white powdered substance in a pile which A could not identify, though she said it "tasted familiar"... taking a peek back at the menu makes us think it may have been crushed sesame seeds. Random? Yes. 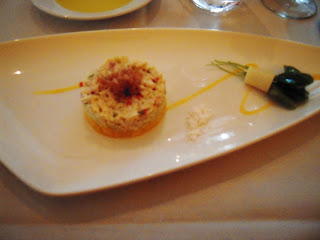 The first course was followed by another little spoonful of a palate cleanser. A simple bite of sorbet with vibrant flavors- I had lychee and A had guava- we also saw another diner receive the purple carrot variety. Pretty to look at and very sweet to taste- not exactly a palate cleanser but we enjoyed it. 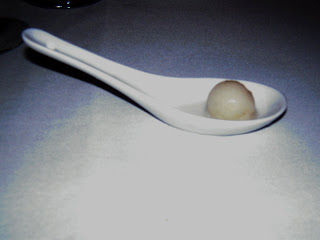 I had a hankering for some red meat, so for the second course I opted for the Hanger Steak. The steak was cut into a generous log-shape, diagonally sliced in half to reveal a medium-rare center. Crispy and salty on the outside with a general hearty flavor, the meat was a little tough but satisfied my need for meat. It was served with braised collard greens which are often oversalted but this was fortunately not the case here. A few bits of bacon gave it the perfect amount of flavor. There was also a brown butter sauce with plump golden raisins at the bottom of the dish- the raisins went well with the greens but I couldn't really taste the sauce. This was actually a recurring theme with these dishes- my escargots also had a red pepper sauce on the plate, but it was just too meager to even attempt to taste. I would have liked a little more of the sauces to make an impact. A highlight of the steak dish was a fried oyster (yay!) which was ENORMOUS- a lightly flavored cornmeal crust around the puffy mollusk helped soak up the flavor of the sea that oozed out. Seriously, biggest oyster ever. 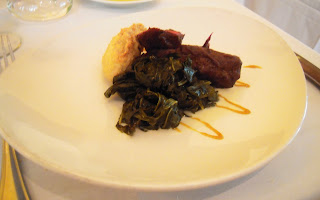 A ordered the salmon entree which was completed by another huge ball of foam- this time of the red wine variety. The fish was somehow incredibly airy- not dense and flaky like typical salmon but much lighter and "wet"- just really, really juicy, providing for an interesting "mouthfeel" upon every bite. This was served with a potato croquette- almost liquefied potato encased in a lightly fried outer shell. Certainly a unique approach to serving potatoes, and well complemented by the sauteed mushrooms along the top. There were also a few steamed brussel sprouts, one of which almost rolled off the table when A attempted to cut it in half. The "pickled cherries" were weird- vinegary and soft, we prefer our cherries right off the tree. However, it showed another twist of kitchen experimentation, which we can appreciate. Overall, another solid entree. 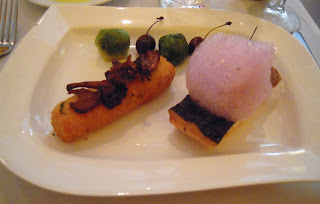 We were getting pretty full at this point, but of course, we always have room for dessert. I chose the Chocolate Ganache Torte, which was absolutely heavenly. It was the type of dessert that most people think is so rich they can only have a bite or two, but I was able to work my way through most of it. Incredibly dense, with that almost bitter taste of dark chocolate that I love. Again, I wish they had been a bit more generous with the "Blueberry Port" sauce, but the torte was absolutely perfect as a stand-alone flavor. A rich ending to a rich meal; I definitely felt incredibly indulgent. 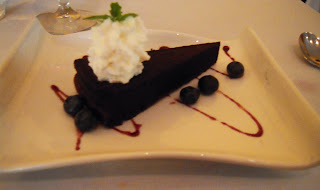 A's dessert was a bit on the lighter side- a lemon curd "martini" with a variety of berries. Creamy and lightly sweet, it was the perfect summer dessert. What more can I say? 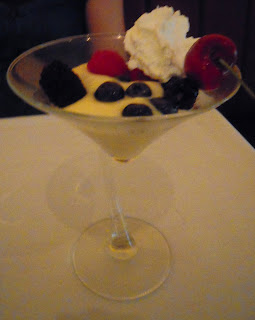 Overall we were incredibly pleased with our dinner and the entire experience. There was a man eating alone near us who apparently requested a candle in his dessert- it was his birthday. The waitress accommodated his request and then purchased his dessert for him- she felt bad that he was eating alone (we think he was traveling, as he had a foreign accent). She also highfived another diner after discovering they were from the same hometown. Interesting and memorable happenings that gave a happy vibe to the dinner- with very little to complain about, this was a standout meal well worth the $30/person price tag. Each of our meals would have been $40+ without the Dining Days deal. I wish Marigold was a little closer to us, but then again, it would probably lose the local, neighborhood "I'm eating in someone's house" feel.