It's hard to talk about Philadelphia fine dining without mentioning Steven Starr. However, looking back at our past year of eats, I'm pretty sure the only Steven Starr-owned eating was done at Barclay Prime. I can't decide whether J and I have recovered from our initial hypnosis by restaurants such as Buddakan, Pod, and the Continental, or whether we've branched out to a degree where Starr restaurants are just part of the unending pool of possible eats. Probably some combination of the two-- not that his restaurants don't have appeal, but they tend to be more of an experience, and come with quite a hefty price.

The Starr Restaurant Dynasty Organization has recently added another restaurant to their vast collection. Although J and I passed on trying his last endeavor (El Rey), The Dandelion seemed more up my alley. With J still out of town, I once again recruited my second favorite dining partner to accompany me to this new, ever-so-conveniently-close restaurant for an end of the week dinner. 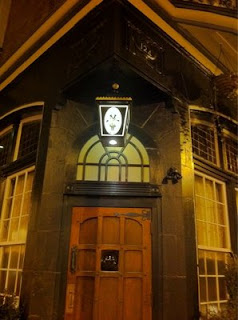 I really have no idea how Starr combined what used to be a shoe/clothing store with an adjacent restaurant space, but the transformation is quite shocking. The Dandelion attempts to recreate a classic British pub, and while I have zero experience with the authentic version, simply approaching the front door took me to a dark European alley, where I was making my way into an out of the way, quiet local pub. Upon entering, those images completely faded as we were met with an extremely loud, busy atmosphere with no obvious employees to be seen. Finally, an unlabeled hostess found us looking lost and led us to a hostess stand in an adjacent room. Tables, bars, and people were scattered everywhere, with twisting hallways and staircases bringing us deeper into the innards of the restaurant. I was almost relieved when we were finally seated in a relatively quieter corner upstairs- but sadly, with no glimpse of the notorious fireplace or dog-themed room.

Our waitress offered us the option of flat or (complimentary) "fizzy" water- is this a typical British description? I was a bit confused at first, but when my boyfriend said flat and I said fizzy, she happily complied with both. On a service note, however, she was a bit inconsistent- either disappearing for great lengths of time or hovering a bit later in the meal. I'll chalk it up to a relatively new service team, but I can't help but think the maze of rooms can't help the speed of service. 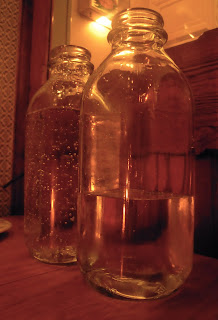 The menu at the Dandelion offers an array of classic British eats. I don't think England is known for haute cuisine, but the items available here all seemed appealing. I persuaded the boyfriend to share an appetizer of my choosing (for once!), the Smoked Salmon and Trout Pate ($8). Served with three slices of thick, buttery brioche, a very generous hunk of chopped smoked fish was mixed with chive, dill, and lemon which helped keep the flavors light. 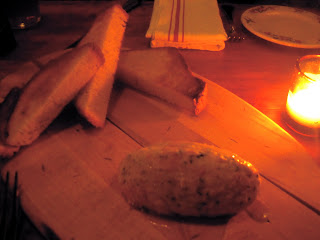 The thick toast served as the perfect base for piles of the pillowy pate-- easily the highlight of my meal. 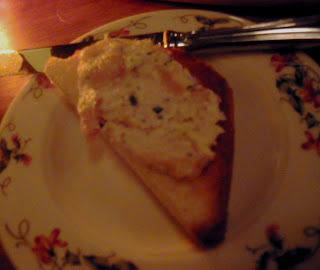 I was a little peeved when the bread service arrived after the pate was mostly consumed- the bread/bread clash was a little awkward and ill-timed. However, I did appreciate a half slice of the sweet, earthy dark stout option with my second course. Side note: the bread is served with a pat of butter on a poorly chosen piece of slate (don't touch the knife to the slate, whatever you do!), as well as a tiny Mason jar of salt. I hope other customers notice the spoon before reaching in to grab a pinch as I mistakenly did... 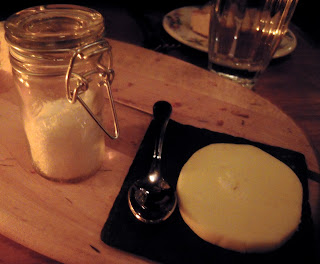 For an entree, I selected the Winter Root Vegetable Soup, accompanied by local cheddar and buttermilk croutons ($8). I was expecting a stew-type soup full of soft chunks of roasted vegetables, but instead was met with what looked like a classic butternut squash bisque. The flavor was a bit more developed than it appeared, with a strong hint of celery, and made good on the promise of British food by containing more than its fair share of cream and butter (even the salads here look heavy!). 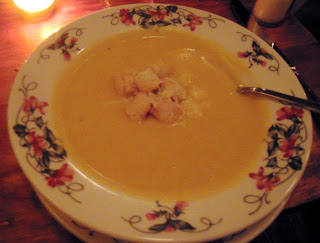 I also went for a side of Cheesy Cauliflower ($5), imagining it would make a nice complement to my roasted vegetables. The cheese sauce of the cauliflower was similarly soupy, thick enough to coat the chunks of cauliflower but thin enough to spoon up once those were gone. A breadcrumb/cheese topping gave it the appearance of mac n' cheese, and enough flavor and fat to fool any veggie-hater. 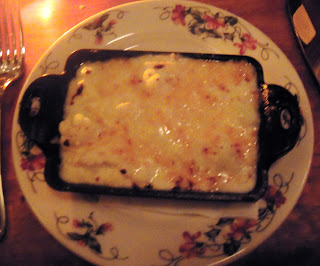 Just as one of my friends has a buffalo wing mission, I think my boyfriend has a burger mission. The burger at the Dandelion ($14) comes with melted smoked cheddar, thin slices of pickles, and a strangely sweet onion-pepper relish located beneath the patty. Served on fluffy whole wheat brioche (a stab of health consciousness??), it seemed fairly run of the mill to me (at least without the addition of the onion relish, which I would recommend leaving out). 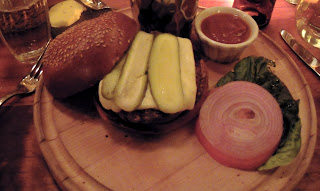 Served with the burger was a more interesting side- triple cooked "chips," fat, squarely cut potato wedges triple fried in beef fat. Again, I can't tout any previous experience with real food from the other side of the pond, but these definitely held a flavor and texture that you don't often find in your typical French fry here in the States. 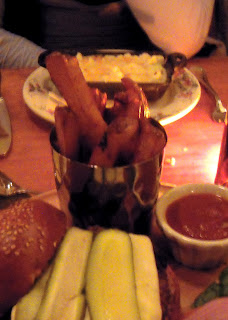 Apparently the Dandelion makes several great renditions of British desserts, including a Sticky Toffee Pudding which sounds superb. However, after two courses of heavy eats, neither of us were prepared for a sugary stomach bomb. I would think about returning in the future for that smoked salmon (or one of their other two pate options) and a go at the dessert, but the thought of fighting the crowds and noise are enough to make me reconsider.

Once again, Starr delivers on providing an unusual, and certainly unique-to-Philadelphia dining experience, transforming a relatively quiet corner into a booming business. While the prices are certainly higher than face value, I can imagine many would take the price in stride in order to be transported to another country, if only for a meal. I for one, am not sure I want to make that trip again.

The Dandelion
18th and Sansom Streets
Posted by Julianne at 11:20 AM