It's that time of year again.. the snow is melting but spring is still a faint speck of light at the end of the wintry tunnel. I think someone invented Valentine's Day to keep the holiday cheer going through these bleak months. For a combination V-Day/early birthday present, I decided to treat my boyfriend (and myself) to dinner. Last year we headed to West Philly, so I chose another slightly-off-the-beaten-path location.

Bibou is a tiny little French restaurant tucked in the Bella Vista neighborhood in the Italian Market area. The area is a tad on the rough side (I may get some flak for saying as much), mostly residential and dimly lit in the evening hours. However, the restaurant whisks you away to another world- a charming "Country French" interior complete with toile curtains, simple wooden furniture, and a surprisingly unpretentious atmosphere. Though the tables are situated close to one another, the feel is more cozy than claustrophobic.

France is pretty famous for their bread, and I happen to love bread, so the offering of sliced baguette and butter was not refused. Though it didn't look too impressive, the bread was dense and pillowy with a thin but crispy crust. The pre-packaged French butter was also ridiculously good- salty, creamy, and smooth... Baguette and butter- one of those simple pleasures in life. 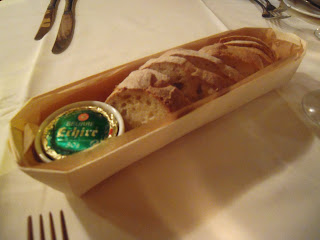 I started my meal with the terrine ($10), a combination of pork fat and crumbled, crispy chopped meat from the head of a pig wrapped up in a few thin layers of phyllo- rich yet delicate enough to avoid being too heavy. A spoonful of "sauce gribiche" was like the most complex egg salad ever- chopped pickles and capers gave texture to a creamy emulsified egg-yolk mayonnaise mixture speckled with fresh chopped parsley. The combination of the sauce with the meat and pastry was magical- and easily savored in small bites. 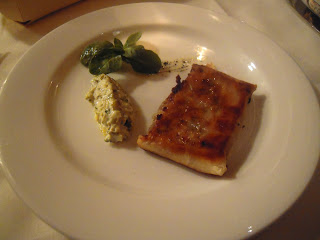 My date went with one of the appetizer specials- venison sausage wrapped in brioche ($10). The meat was unique- it lacked a certain level of spice that I tend to associate with sausage. Instead, the lean venison had an almost slow-braised, smoky flavor that stood on its own- mild but with a hint of gameyness, and not in a bad way. The brioche wrapper was on the dry side, but soaked up the sausage juices and provided a sweet, slightly eggy flavor. A buttery sauce certainly didn't hurt either. 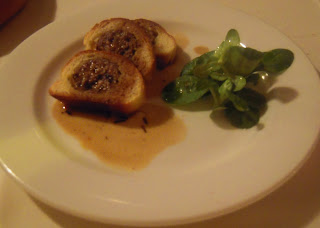 The entree was a pretty easy choice for me- grilled turbot ($28). This white fish was a new species to me, and is pretty similar to flounder, except ten times better. The meat itself was surprisingly dense with a bit of chewiness to it. The fillet was also surprisingly thick (those flat fish just look so...thin), and cooked to absolute perfection. It almost seemed like it had been poached in butter and then painted with those grill marks. Tiny little butternut squash spatzle (hey... isn't that a German food?) mixed with slow-cooked spinach rounded out the dish- perfect complements to the fish. A generous addition of beurre blanc (translation: white butter) was creamy and rich, exactly what the dish needed to seem like an extraordinarily luxurious treat. 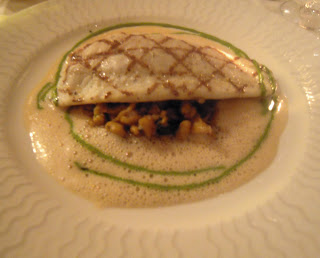 I thought the boyfriend would most certainly order the bouef (he's typically a red meat eater), but he opted for the pied de porc ($25). Gross side story: his med school class quite recently began to learn suturing techniques on pigs feet... apparently this made him interested in consuming them. Coincidentally, a video was just posted online describing the cooking process for this dish. Five hours of braising causes the meat to be literally falling off the bone. Sauteed foie gras gets wrapped up into the foot meat and the whole thing gets pan-fried to add a crispy outer shell. Served piping hot over a deep pool of lentils, the combination of meats and cooking techniques provided for a rich and hearty explosion of flavor. 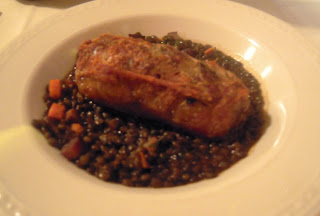 Of course I needed to see what they could do in terms of sweets, so we split the goats milk creme brulee ($8). Honestly, I don't typically like creme brulee because I find it a bit two-dimensional, but something told me this would not be the case at Bibou (I also may be obsessed with all things goats milk). The cool, creamy custard alone won me over, but the crispy, thick layer of caramelized sugar was like a hard candy coating. Cream and sugar and a hint of vanilla... seemingly simple yet so darn delicious. Complimentary macaroons and meringues were a sweet surprise. 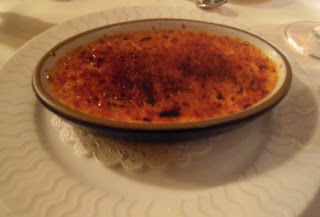 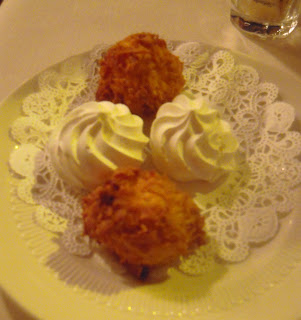 In fact, it seemed that the entire menu is a study in the contrast of simplicity and complexity. The chef makes it seem entirely effortless, accentuated by the time he takes away from the kitchen to stop by each table and relay his mission to offer food as true to original French cuisine as possible. The service from our waiter, the hostess, as well as the additional wait staff was nothing but hospitable and helpful... being called Mademoiselle and hearing "Bon apetit" made the experience that much more genuine. The check didn't end up breaking the bank, but I'd still reserve this as a "special occasion" restaurant. Be sure to call well in advance for reservations- though they are on OpenTable, you can get in by phone before you are allowed to book online.