A & I have enjoyed some delicious food in Manayunk, so when we made plans to head there for a charity bowling event, we knew we had to enjoy dinner there as well. We also knew we wanted something relatively quick, inexpensive, and with a range of menu choices since we were accompanied by a couple of friends. A emailed out a list of options, and we all settled on Winnie's Le Bus.

We're more familiar with the Le Bus bakery/mini-cafe a few blocks from us, though I can't say we've ever stopped in. Metropolitan Bakery is much closer if we need a last minute baguette, and Le Bus is too close to DiBruno's to compete in the snacks/treats category. However, the Manayunk extension offers a full sit-down restaurant version highlighted by Le Bus baked goods and classic American "good, gotta eat food" (their catch phrase, not mine).

Plenty of room for a walk-in party of four during the dinner rush on a Friday evening- we settled right in and started perusing the menu. Our waitress brought over a basket of Le Bus bread- a nutty, darker raisin bread; a grainy, slightly sweet and denser corn bread, and a plain white French bread for those with boring palates (I judge). The assortment was appreciated, and it was a good intro to the various baked goods that Le Bus offers. 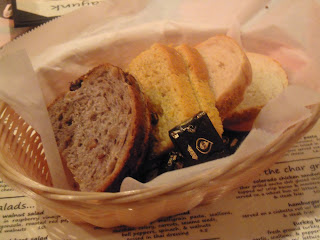 Our group agreed to split the Hummus appetizer ($8.75). Seriously, I think we've ordered something like this at the past twelve restaurants we've been to, but it's a classic. And it's always good. Though the supposed star of the plate was unmemorable, Winnie's upped the ante with fluffy, whole-grain, seed-y pita; mixed grilled squash; a deliciously firm, salty block of feta; and some of the best eggplant I have ever eaten. Soft without being mushy, sweet without losing the savory, and with a rich, oily taste that wasn't greasy in the least. I want the secret recipe. A few olives completed the plate. Again a solid variety of options- we all tasted a little bit of everything. 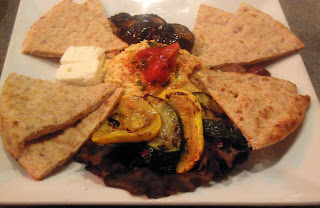 A & I were kind of boring and stuck to the "for the vegetarian..." portion of the menu. I went with the veggie burger ($10.85), a well-formed patty of whole grains, veggies and herbs on a wheat-y but still light and airy hamburger bun (the real burger is served on ciabatta). A thin slice of melty white American cheese, salsa, guac, lettuce, tomato, and pickles... *whew*... the height on it was pretty intense. Squishing everything down and cutting the monster in half seemed to help. Because of it's meatless status, it was actually pretty light- I had no problem conquering the burger. Unlike some veggie burgers (Village Whiskey comes to mind), the patty wasn't sloppy at all. It held it's form and had a good texture and relatively neutral taste. The sweet potato fries were a little on the limp/cold/plain side for me, and the side of yogurt/applesauce/horseradish was too reserved- I would have liked for it to be more sweet and/or more spicy. 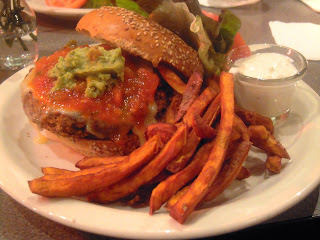 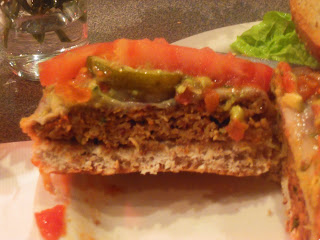 A ordered the brown rice nut salad ($10.50), which sounds so ridiculously healthy and boring, but of course, she enjoyed it. It was actually more of a second rendition of the appetizer plate: the same pita, hummus, and olives. The salad portion was pretty small, but was a good room-temp mix of brown rice, fresh chopped veggies, various nuts and seeds, and a few raisins for good measure. Sliced avocado ($2 extra) was great for smearing on the pita. I would prefer to see this salad served on a big bed of mixed greens- brown rice doesn't need pita as a co-star. Though the Mediterranean-inspired tahini-based dressing makes the pita/hummus addition sort of obvious, I think the chefs could get a little more creative. 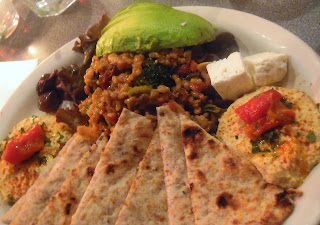 Weekends call for a little more of a "treat splurge" so I pretty much forced our table into sharing the brownie sundae ($6). A piping hot brownie was topped with three scoops of ice cream, whipped cream, and chocolate sauce. Extravagant? Absolutely. I like my brownies cold and more like a thick fudge, but this one was super hot and not at all chewy- more like a chocolate cake. The ice cream was good- vanilla, chocolate, and mint, which was the perfect combo to melt together over the brownie. Nothing out of this world, but a nice sweet ending to the meal. I certainly ate more than my fair share. 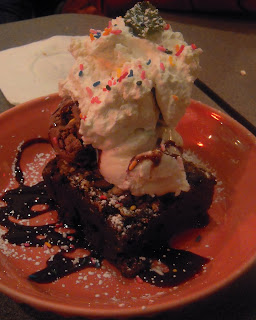 Our dinner wrapped up with the perfect amount of time to find our way (up many steep hills) to the bowling alley, and we were certainly all satisfied. Splitting the app/dessert kept us from being too full to move, but maybe I should have blamed my gutter balls on a food baby. I hear the brunch is great on the weekends, but that the place gets packed full of bikers- not the Harley kind, the Trek kind. I enjoyed the quieter dinner scene- our waitress even had time to chat with us about Justin Beiber. Solid comfort food for a good price, overall a positive experience.