As exciting as our "blog-iversary" was, we were looking forward to the celebration of our 25th birthday (seems old to us!). With a number of restaurants on our list reserved for special occasions, we quickly picked one we've heard about and talked about for some time-- fish. Bonus: location. Only three blocks from home, it was perfect for a cold, wet evening.

Entering the restaurant, my preconceived notions went straight out the door. I expected a small, cozy place (maybe Barbuzzo-esque?) but instead we were led into a cramped, dark dining room, with odd bits of ship paraphernalia interspersed with modern decor. 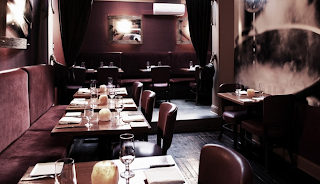 It was also much louder and busier than either of us expected for a random weeknight. Unfortunately, this somewhat unsettling introduction to the restaurant set the tone for the rest of the night. The menu is split into a raw bar selection (oysters only), and first and second courses named primarily for the animal featured (ie Lobster; Scallops). Easy enough. One note: the plates are often not pescatarian friendly, combining another type of meat with the seafood.

J and I started with oysters- one of our favorite foods. Unfortunately, our waitress completely misunderstood our order, as we asked for "two each" of the West Coast and East Coast oysters. Since we didn't specify the location of origin for our choices, our waitress assumed we wanted two of each variety, landing us 12 oysters. At $2.50-$3 a pop, we sadly sent them back to the kitchen. The waitress seemed peeved with our miscommunication and subsequently treated us with a bit of annoyance. 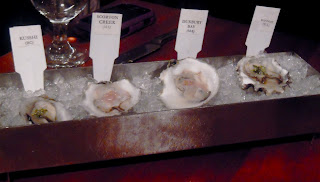 Each oyster is arranged on the half shell on ice, perfectly shucked, previously dressed and ready to be swallowed. Plastic tabs refer you to the prior home of each oyster, allowing us to test our palate (yeah, right!). The West Coast oysters come with a cucumber mignonette, which goes well with the briny mollusk. However, upon tasting the East Coast oyster with its more classic onion/red wine vinegar mignonette, I changed my mind. Don't waste your time on the cucumber flavored options.

Our "first course" was cleared and then we began waiting for our appetizer. The wait stretched on interminably- usually at a dinner with the two of us, I'm fine with extending the meal for several hours. But this became slightly annoying. The tight quarters and full restaurant also practically forced us to eavesdrop on our neighboring diners, leaving us slightly aghast at some of the alcohol-fueled conversation/PDA at the table perpendicular to ours. Finally, our waitress brusquely explained there was a mix-up in the kitchen and that the restaurant would be comping our first course. I can wait quite some time for free food...

The "Octupus" (sourced from Spain) dish featured several large tentacles of meat atop a small, neat bed of artichoke, chickpeas, and lamb shank, all dressed in a rich, salty red wine (?) reduction. The intense flavors and textures quickly made up for both our long wait and the rather small portion (maybe sharing wasn't a great idea). The octopus was lightly fried and tasted like "the best French fries ever made." Odd, but very delicious. The chickpeas were fresh and firm and the lamb shank braised to pieces. 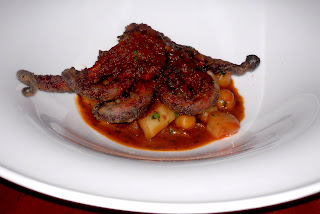 We then had another awkwardly long pause before our entrees were served (not long enough to be comped, but probably close!). J chose the Striped Bass ($29) as an entree. A good selection: it's hard to deny the light, fresh, buttery meat. It was served atop a thin layer of pureed potato, as well as some braised greens, onions, and fresh radish. The well portioned, perfectly seared fish was then topped with a very grainy mustard. The whole combination was well-balanced and certainly enjoyable, but sort of left something to be desired. 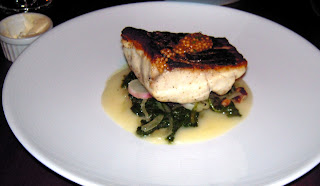 I went with the Sturgeon ($31, sourced from Washington State) almost primarily because of what it was served with: brussels leaves, butternut squash, bacon and chestnut gnudi. After a few almost-failed attempts at making butternut squash gnocchi, I'm semi-obsessed with alternative gnocchi made by professionals. I practically licked my plate clean- the vegetables beneath the fish were very typical of winter, but not heavy in the least. The gnudi were doughy and tasted heavily like nuts- not anything like I expected, but so fun to eat. The fish, one I don't have much experience with, was slightly bland around the outer layer but smooth and salty (somewhat like the flavor of an oyster) in the inner pink center. 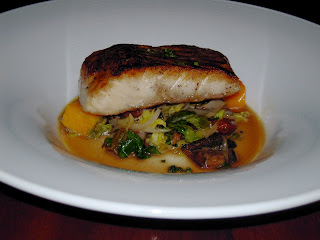 At this point, we had been seated at the restaurant for a bit over two hours, and having only eaten two courses, were getting restless. We had no desire to spend additional time there, and overlooked dessert in lieu of the check. A good chunk of change later, we left satisfied but certainly not overjoyed. I have heard countless raves about fish. in general, so I'm not sure if we just had an unfortunate experience, but we won't be running back.