It's a well known fact that Penn students flock to the many food trucks scattered around campus. Everyone has their own opinions on where to get the best burrito, the best Chinese, even the best fresh fruit. Though A & I did not partake in this phenomenon as undergrads, we recognize good street food when we see it. The Tyson Bee's truck is hard to miss- with it's brightly colored amorphous animals and adorable fat bumblebees, it certainly draws the eye away from the nondescript silver boxes in the nearby vicinity. After somewhat of a rough go as the executive chef at a restaurant (Chew Man Chu), Tyson Wong Ophaso is now taking a stab at the food truck industry. 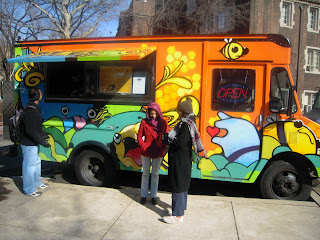 Now that A & I are both working on the west side of the Schuylkill, we've started eating lunch together about once a week. On a recent lunch break, we met up with a friend and headed over to 33rd and Spruce. There were several small groups of people waiting for their food, but we stepped right up and placed our orders. A cute detail is the use of playing cards to distinguish separate tickets- we were the king of clubs.

Standing out in the cold isn't my all time favorite thing to do, so thankfully the food was ready in about 5 to 10 minutes. We headed over to nearby Houston Hall to eat the goods in the warmth of the indoors. Although our lunches don't typically consist of multiple courses, we both wanted to try the steamed pork bun ($3). A thin, doughy pad of bun served as a platter for a generous pile of slow-cooked pork. Another circle of bun could be pulled over the top to create a little sandwich- also easier to eat this way. Hands down, the best aspect of this bun was the combination of meats- bits of pulled shoulder as well as a slab of pork belly. A minimal amount of sweet and salty sauce as well as the requisite cucumber and cilantro optimized the flavor palette. 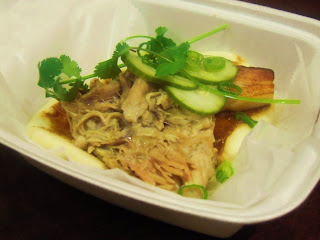 I had a hankering for a good sandwich, so the "Grilled BBQ Lemongrass Pork Bahn Mi" ($5) obviously had my name all over it. My most recent Bahn mi in Newark, DE was rather untraditional, so I was hoping for a true Vietnamese hoagie. Ophaso did not disappoint- although the sandwich had a few modern twists, overall it fulfilled all of the Bahn mi requisites. Typically served on a crustier baguette, this roll was extremely soft and fluffy with only a hint of a toast on the inside. Cilantro, cucumber, shredded carrots and pickled peppers provided crunch, a solid hit of freshness, and a tangy vinegar undertone. However, the real highlight was the barbecued pork. Chunks of juicy grilled meat were coated in a thick, slightly smoky sauce- no dry, gristly meat here. A smear of spicy mayo added the perfect after-burn that extended the delight of each bite. Though I didn't experience much lemongrass, I have no complaints- the sandwich was terrific. 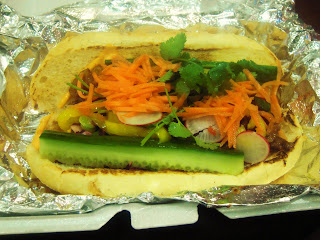 A went with the Korean BBQ Short Rib & Kimchi burrito ($5). Though the burrito wasn't particularly fat (ie overstuffed), it was still a good sized portion. The tortilla itself was thick and dense, with a whole-wheat flavor and specks of green herbs throughout. Although its hard to go wrong with short ribs and kimchi, the combination within the burrito was superb. The meat was cooked down to a "wet" consistency, providing extra flavor for the rice. Short-grain rice made for a more compact burrito, while the pickled veggies added a significant amount of spice. I noticed that the components weren't well distributed through the inside- one bite could be entirely rice or entirely meat. It would be nice if they were a little more mixed, but this can be an issue with any burrito. 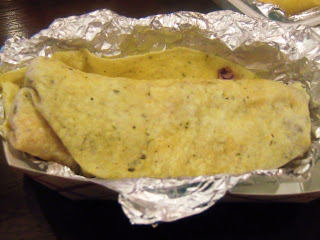 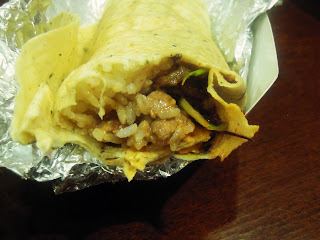 Overall, our atypical foray into food truck cuisine was a success. The food was great quality and an adequate quantity for the price. Original takes on traditional Korean dishes made for a unique and interesting lunchtime meal. Though we will continue bringing our own lunches to work (cheaper/healthier in the long run), I would definitely recommend this truck to anyone in the Penn area- they're open till 5:30 so you can even pick up an early dinner on your way home.