We haven't had a travel edition in a while, but A & I recently took a quick weekend trip to visit a college friend who is now at Hopkins. Just a hop, skip and MegaBus ride away ($4.50 round trip for two. Can't beat that!), we knew our hostess would satisfy our need for delicious food.

We started our weekend on Saturday morning by making crepes. Since I'm the pancake master of our household, I quickly became the apprentice crepe-er and added a new type of pancake to my repertoire. I'll have to remake them at home and blog the recipe- very eggy and easily wrapped around any number of fillings: fresh strawberries, sliced banana, honey, chopped pecans, strawberry jam... the combinations are endless and the crepes are light enough to allow multiple renditions. 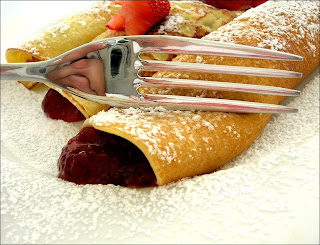 Not our crepes, but you get the idea...
Source

Our main focus of the day was learning yet another trade: the art of truffle making, which will be honored by its own write-up. During one of the "waiting" steps, we worked up our appetites with a trip to the gym. Since we also wanted to fit in a lengthy visit to the National Aquarium (I'm obsessed with stingrays...), our friend suggested picking up tacos at a nearby tortilleria. 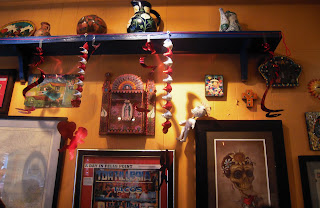 Tortilleria Sinaloa is a tiny little place with a huge amount of character. In the Mexican district of Fells Point, it fits in along a row of bakeries, coffee shops, and grocery stores. With only a few barstools along the front window, we were lucky to snag a few seats after we placed our order at the counter. While we waited for our food, we watched one of the employees working on the tortilla machine. 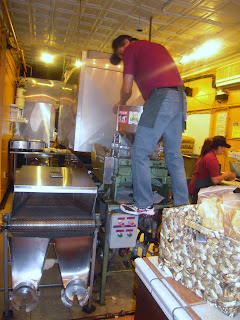 A & I each ordered two tacos, and we split a "medium" (aka giant) bag of tortilla chips and a medium guacamole between the three of us. I opted for the barbecue and pork tacos ($3.25 each), each of which consisted of incredibly fresh double-layered corn tortillas, a generous portion of meat, and a topping of chopped onion and cilantro. A squeeze of lime juice and a dollop of two different types of salsa completed the handheld delight. The barbeque flavor was subtle, allowing the other aspects to play their own roles properly. 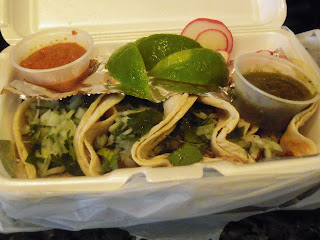 A's chorizo taco ($3.25) was probably my favorite, as the meat really exemplified what I consider Mexican cuisine. The chopped sausage had a spicy kick and enough "juice" to saturate the flavor into the tortilla. The chicken taco ($2.75) was a simple surprise- slow roasted, finely chopped dark meat held a smoky flavor that again perfected flavor combination within its cornmeal shell. 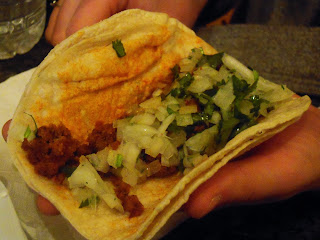 The chips ($2.85 for a lifetime supply) were also the epitome of fresh- crunchy and crispy, a good thick tortilla fried to make the perfect guac scooper. The guacamole continued the "surprisingly simple" theme- thick chunks of avocado with a hint of lime juice and a few grains of salt- nothing else necessary. After missing the opportunity to eat authentic Mexican food during a recent trip to California, I savored every bite. 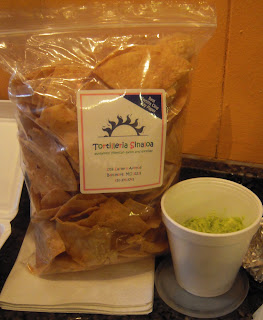 Properly fueled for stingray stalking and learning the life cycle of a jellyfish (as well as finishing the truffles,) we didn't get hungry for dinner until a bit later than usual. After considering a number of ethnic restaurants (Eastern European and Afghani were contenders), we opted to head to Lebanese Taverna in the Harbor East neighborhood.

A large space in a more newly developed area of the city, the restaurant is actually part of a small chain in the DC/Virginia area. It was filled with patrons as we arrived, so we had to wait a few minutes for them to "set our table." The extensive menu had us pondering over our options, and we ended up ordering a bunch of appetizers and small plates to taste as much as possible- a common tactic in our household. While we waited for the food to come out, we snacked on a mixture of white and whole-wheat bread- somewhat of a mixture between pita and naan. The accompanying dip was heavy on the oregano, with olive oil and sesame seeds providing backdrop flavors. 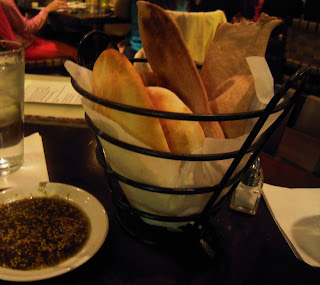 Although we ordered food meant for two courses, all of the food was delivered at once. Our appetizer options were the Baba Ghannouge ($6.50) and spinach pie ($6.50). Thankfully we'd saved some bread for the eggplant dip- creamy and full of tahini and citrus flavors, our only complaint was that it seemed to lack eggplant. This actually set the stage for the rest of the meal- because the restaurant is so large and caters to a broader clientele, it seemed like they "dumbed down" the food, in order to appeal to the masses. While certainly delicious, we prefer a more authentic experience. 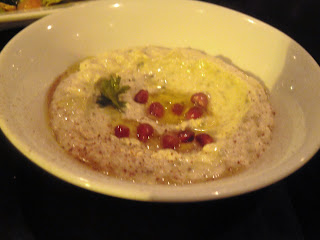 The spinach pie had a thick pastry crust encasing well-cooked chopped spinach and onions as well as a lots of lemon. The outer shell took control as the primary textural component, but the veggie mixture inside still stood its ground in terms of flavor. We also had a spinach flat bread ($6) that reworked the same ingredients with the addition of thick, melted cheese and about ten times the amount of lemon. Overall the flat bread still somehow worked- probably because it remained an atypical combination of ingredients, which we always enjoy. 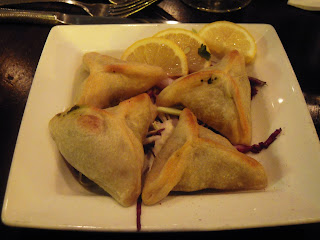 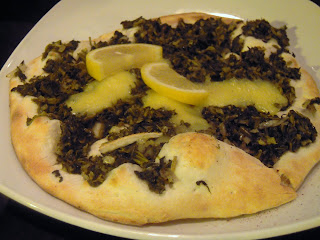 I also ordered a flat bread- the lamb and beef ($7)- which was served in a distinct manner with two layers of a thinner, crisper crust. I liked the different renditions of the type of dish- it showed creativity and highlighted different cooking techniques. The meat was ground into a fine paste and smeared between the layers. Accompanied by chopped tomatoes, the whole thing was grilled to add in a smoky, burnt edge that complimented the gamey lamb flavor. 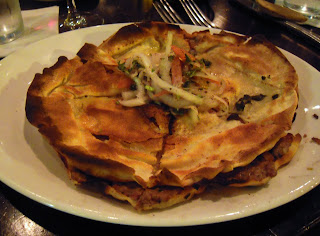 A & I both ordered house salads ($5.50), since we love standard Greek salads and were curious about the Lebanese rendition. This version maintained the romaine, red onion, cucumber and tomato combination, but added a sweeter viniagrette and crispy pita pieces. They also omitted the typical feta cheese, making for a lighter dish full of fresh veggies- always something we crave. 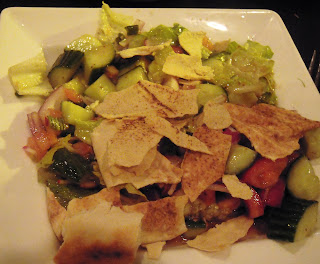 A chose the grape leaves ($6.50) as her contribution to the dinner. I don't typically love grape leaves because of their bitter, overly salty flavor, but these hit the spot. Thin grape leaves were well-marinated and filled with a flavorful combination of rice, chickpeas, and lots of fresh chopped herbs. The mint and parsley balanced the grape leaves perfectly. 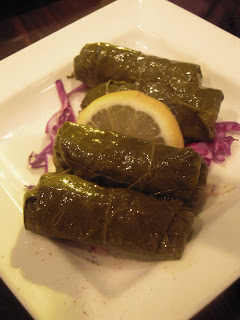 We finished the evening with dessert, of course, all somehow agreeing on the baklava ($7). Served with our choice of ice cream, the phyllo/pistachio pastry was served in log form. This meant the layers of phyllo weren't as crispy and honey-baked as I prefer. Additionally, the pistachio flavor inside was overwhelmed by a pomegranate sauce. The pistachio-orange ice cream was a hit- sweet and citrusy, yet definitively nutty. It satisfied our need for a sweet treat while still remaining loyal to (a somewhat watered down) ethnic cuisine. 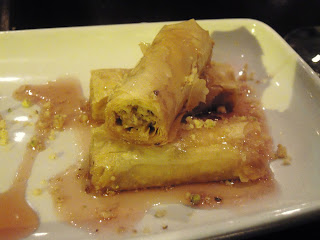 Thanks to much effort from our fantastic friend/hostess, we had a thoroughly enjoyable weekend jaunt to Baltimore. Full of fun activities and of course, lots of delicious food, we loved getting to know a (small part of a) new city!