We don't do a lot of "repeat eating" both because there are always new restaurants calling our name, and because I'm always looking for new blog topics. But, here goes: our first repeat review. Our parents came to visit this weekend and my dad specially requested we go to Amis. Our original visit here occurred just days after its opening, another reason I was fine with a second go- it is always interesting to see how a place settles after months of service.

I re-read our original post beforehand, just to remind myself what I liked and what I didn't. To cut to the chase, overall, I had very similar feelings after both visits- most of the food is great (a few dishes are just slightly above average), the prices are a bit steep, and the atmosphere is a little overwhelming. The acoutics in that place make conversation turn into a screaming match; thankfully, we were given a table at the far edge, so we weren't in the middle of the din. 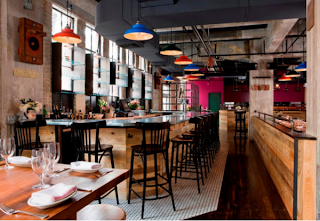 The menu is both the same and very different from the original opening menu. It still maintains the same structure- bruschetta, homemade salumi, seafood, meat, and vegetable based antipasti, and pasta and meat based main dishes. However, very few of the menu items seemed familiar, which we actually appreciated. It takes a talented kitchen to continually switch up the offerings, particularly with an eye towards seasonal ingredients. 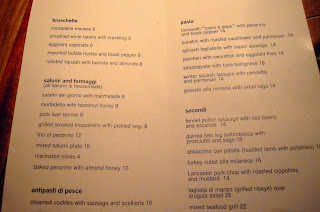 It did help to have previous knowledge of the portion sizes, so we mirrored our former trip by ordering multiple smaller dishes and then each choosing one larger plate. The complimentary bread is similar to what we were served a year ago, homemade foccacia- fluffy and buttery. My dad wasn't a big fan of the high fat content- no butter or oil option, it's added regardless. Personally, I probably could have eaten an entire loaf myself. 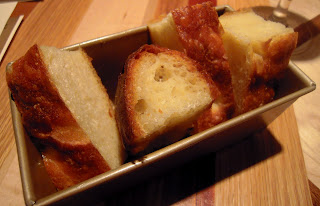 Pretty soon, our appetizers arrived. And I'm not talking a slow pace of one dish after another- all six of our chosen starters came simultaneously, overcrowding the table and preventing me from ever focusing on a single dish. A bit of a system overload, which was disappointing as the waitress was specifically told we were all sharing these dishes.

The only repeat of the night (in relation to last visit) came with the arancini ($6). I loved these crispy balls of fried risotto, and I needed to have them again. The main difference from our last visit was the size and portion- here we were delivered four smaller balls instead of two large, which was actually great for sharing. A magically thin fried shell encases some of the creamiest rice imaginable, with just a bit of meat in the middle and an outer dusting of salty parmesan to complete the dish. 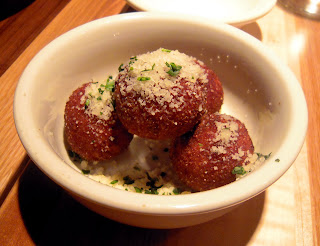 We also got two bread-based plates, one of which was a bruschetta. My mom chose the roasted squash bruschetta with burrata and almonds ($8). A generous dish of topping was served with four pieces of buttery toast coated in crunchy sesame seeds (a great touch, in my sesame-loving opinion). Soft chunks of butternut squash were topped with melted burrata- basically the love child of mozzarella and cream. This was my favorite of the evening, although none of my family members agreed. 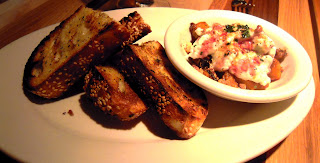 Interestingly, J's favorite was the other bread + cheese combo, the baked pecorino with almonds and honey ($10). A dish of smooth baked cheese, similar in texture to melted brie, was topped with honey and chopped almonds and served with two pieces of that superb bread. The cheese was a little awkward to scoop out, but once atop the bread, produced a sweetened grilled cheese effect. Good, but surprisingly small for the price. 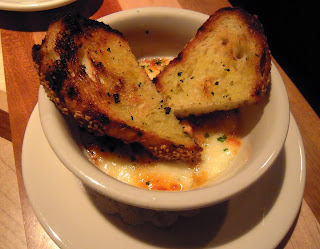 It's hard to go wrong with a charcuterie plate, so we also went for the mixed salumi plate ($16). Another expensive starter- the components are all homemade, but the servings were painfully small and strange to eat on their own (no accompaniments). Thin slices of faintly sweet mortadella, two half-moons of earthy pork terrine, and three bits of fatty, well-flavored salami gave us each just a tiny taste of the different preparations of pig. 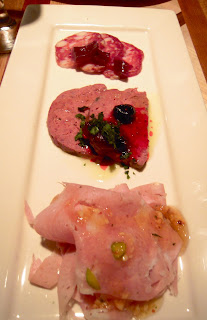 We all also agreed on the octopus antipasti, served cold with olives and small chunks of potato ($10). This is a classic dish that I customarily love, and Amis was generous with the large chunks of fresh grilled octopus. Unfortunately, I wasn't a huge fan- I'm not sure if I was just octopussed-out after last week's mountain of octopus at Dmitri's, but the hint of fishy flavor wasn't my favorite (disclaimer: no octopus went uneaten). 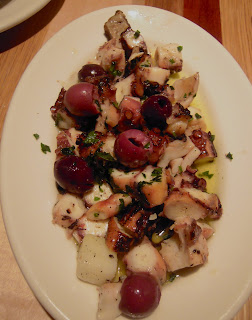 Our final dish in this barrage of appetizers was actually a side dish, the sunchokes in soffrito ($6). We wanted to add a few vegetables to the mix, and have never tried sunchokes on their own. I'm not sure we succeeded in adding any health value, but the new flavor and texture of this veggie were worth a shot- a bit of a mix of flavor between artichoke and roasted onion, with a texture more similar to a starchy potato. I kept sampling small bites in order to form a solid opinion, but I never fell in love. 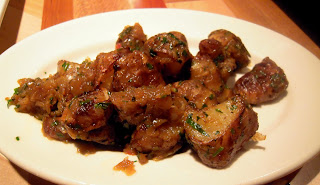 Finally, a lull in the meal after our frenzied appetizer-eating. The kitchen gave us a nice break to recover, and begin anticipating our final dishes. Each of us ended up choosing something different for our main course, but lots of cutting and sharing took place with these as well. I went with the spinach tagliatelle with capon sausage ($14), another of my favorites of the evening. The (fairly substantial!) pasta was green in color, but most of the flavor came from the heavy dose of grated cheese (sorry, my cheese palate is not refined enough to identify!), which was quite salty. The pasta was thick and chewy while remaining light, and the crumbles of meat (resembling ground turkey; a capon is a rooster) added textural interest. 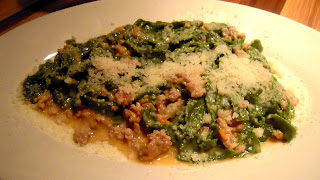 J went with a meat dish, the Lancaster pork chop with roasted cippolinis and mustard ($14). As expected, the dish came just as described- simply a cut of meat topped with the roasted onions. I only tried a tiny nibble, but she described the pork as a bit overcooked (we like chops ever-so-slightly pink in the middle). The baby onions were caramelized whole, an impressive feat, and offered a sweet topping for the meat, but the mustard was nowhere to be found. 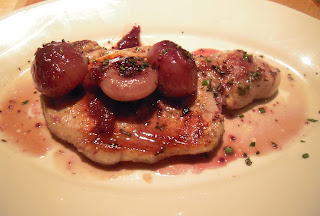 One of my favorite parts of last year's meal at Amis was the dessert, but I couldn't convince the others that they wanted to stay for a third course, as they were all jonesing for Rita's custard (I can't blame them). So, we cut our evening a bit short, finishing our entire stay in just over an hour- quite hurried, in my opinion. While we all enjoyed what we ate, we left a little disappointed in the experience as a whole-- almost exactly how I felt after our original visit. Perhaps this is what Vetri intended- a trattoria meant for a quick bite, but to me, "Amis" suggests a leisurely meal shared with friends and family.