Preparing for a Detox

Hooray, Spring is here! Sunshine and some warm(er) temps have us quite happy. Along with more daylight and trees coming back to life, lots of people tend to do some major "spring cleaning", uncluttering and prepping for a return from hibernation. Although A & I do have a major closet clean-out planned for next weekend, we also decided to do a week-long diet detox. Well, I shouldn't use the word "diet"- we're not trying to lose weight. However, cold, wet weather oftentimes has us indulging in comfort foods and we'd like to redirect ourselves back to a healthier track of lots of fresh produce and whole grains and less processed sugar.

A planned out a simple menu for the week, and we even have a couple of weekend restaurant destinations. However, eating clean doesn't mean we're not going to want something to snack on or something sweet to eat after dinner. Hence, I was put in charge of concocting some wholesome treats. NCAA's March Madness On Demand kept me company in the kitchen. Go Gators! 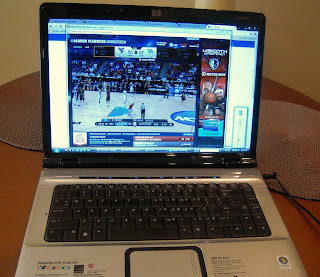 We both really like KIND bars, especially the coconut and almond ones, but $1.99 each? Please. A weeks worth would consume over 20% of our weekly grocery budget.

Since the producers of these bars pride themselves on having simple ingredient lists, it makes it easy to replicate them in your own kitchen. Using one of A's favorite blogger's recipe as a template, whipping up a batch was no big thing.

First I combined all the dry ingredients in a bowl: a cup each of chopped almonds and unsweetened coconut, a half cup of chopped Turkish apricots, a handful of dried cranberries, a couple tablespoons of flaxmeal, and a tsp of salt for good measure. As "glue" I added a 1/2 cup of light agave nectar and gave it all a good mix. My mixture ended up a little on the "wet" side, and in retrospect I wish I had thrown in a bit of uncooked oats. Oh well, next time. 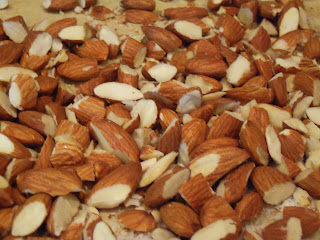 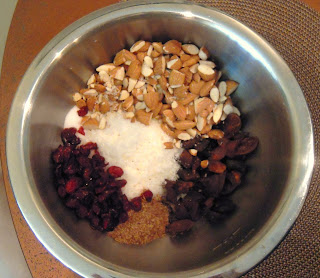 Well pressed into an 8 inch square pan coated with cooking spray, the mix went into the oven at 350F for 25 minutes. Once the edges looked crispy, I pulled them out and let them cool until they were just barely warm. I was nervous to leave them in and end up with a caked-on mess, but my impatience led to some crumbled bars- not to fear, they easily pressed back together. This recipe made ten bars, plus an extra skinny strip on the side for "taste-testing." 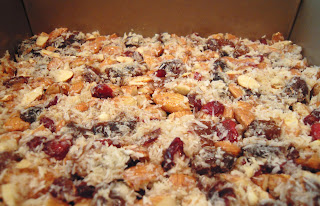 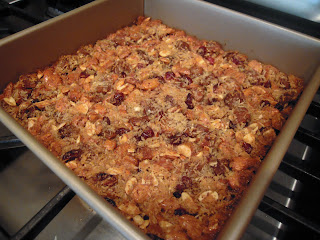 Besides being ridiculously easy to make, the bars are sticky and sweet with a good dose of healthy fats and protein to quiet afternoon hunger pains. Even better, they cost less than half what store-bought bars would be, even with ingredients purchased at Whole Foods (infamously known as Whole Paycheck). 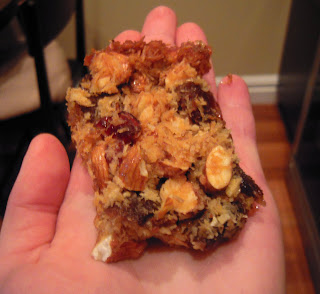 To continue with the coconut theme, A sent me the link to a healthy recipe for macaroons. Typically made with egg whites, white sugar, cake flour, and sweetened coconut (coconut with added sugar- I could eat cups of this, no problem), macaroons are not typically something you'd eat while detox-ing. However, coconut on its own has a range of health benefits, and as a "fruit", has a naturally sweet flavor that I happen to love. This recipe has essentially one ingredient, but you can add in flavors- I went with a bit of vanilla bean paste and a few drops of natural almond flavor. 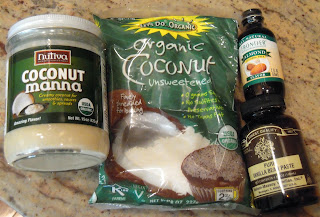 Mix 1 cup of coconut butter (coconut meat blended until it becomes liquidy- the original recipe explains how to make your own) with 2 cups of unsweetened coconut flakes. Add your flavors (or you can add cocoa powder to make chocolate 'roons) and blend everything together. My jarred coconut butter was on the solid side, so it took a bit of elbow grease. My mixture definitely seemed a bit on the dry side, but I figured the creamed coconut would melt a bit more in the oven and hold everything together. 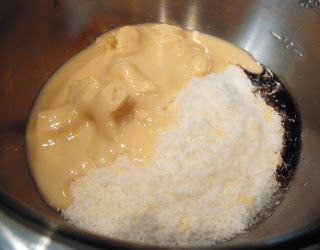 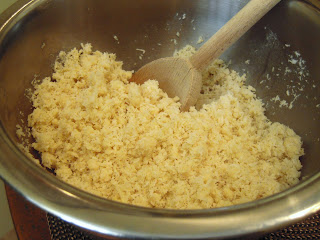 Therefore, I forged on and shaped the 'roons by smushing a handful of the mix into my ice cream scoop and then tapping it to dislodge the coconut dome onto a Silpat-lined baking sheet. I baked them for 25 minutes at 300F, until they took on a golden crispy color and smelled deliciously toasty. 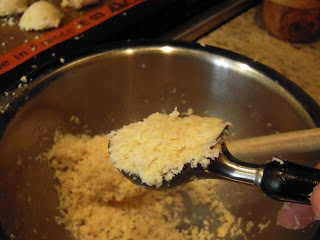 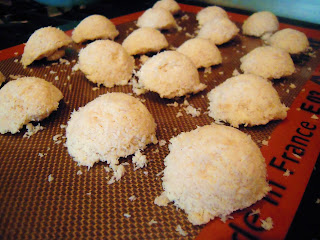 I let them cool completely before I dared touching them, which involved delicately placing them in a Tupperware for storage. No doubt they're too dry- I wish I had added some other source of liquid (but what?? egg whites?) to give them some moistness. In the first recipe, the super small size of the dried coconut was beneficial, but I would have liked a bigger shred here- I don't think what I used helped with the dryness. They also needed a heftier amount of the almond flavor- A's not a fan so I went on the light side. 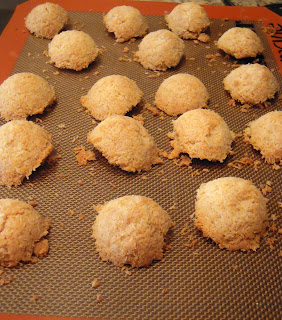 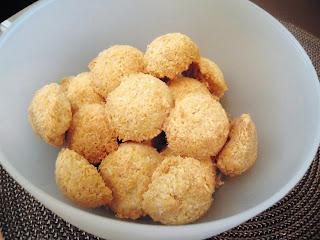 Although I would make both recipes differently if I could have a re-do, they will serve their purposes well this week. Looking forward to some delicious, healthy meals and yummy snacks to boot (though I might need to make some REAL macaroons on the other side...).
Posted by A and J at 4:28 PM