With our detox heading into the weekend, A & I knew we were going to have to make some careful choices. Our weekend dining adventures usually take us furthest off the path of healthy eating- there's just so much scrumptious food calling our names! While we typically embrace the indulgences, this weekend we decided to try out the popular vegan restaurant Horizons, just off South Street. While vegan food should never automatically be designated as healthy, Horizons seems to have a fresh perspective that we felt we could work with.

The two story building has somewhat of a Southwest/farmhouse vibe from the outside, while the inside is part soothing (waterfalls, soft lighting), part natural (color schemes/artwork/music selection), and part upscale (swanky microsuede seating)- yes, I think the word that best describes the place is "eclectic." The decor doesn't deter the diners- it was packed the entire time we were there, and they can fit a good number of people. Calling in a reservation earlier in the week was a little tough- the most popular dining times for Friday were all booked up. 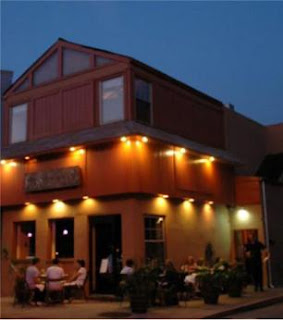 We were seated upstairs and almost immediately given a conical basket of sliced focaccia. After a week without bread, you can imagine I had quite a hankering, and this was an excellent way to break the bread fast. Fluffy and buttery with a touch of salt on the crust- perfect start to the meal, as well as a little something to munch on between courses. 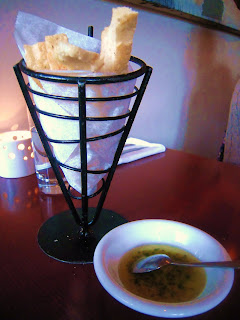 My bread deprivation was also the primary motivator for me to order the Bahn Mi Bruschetta ($9). Four slices of soft baguette- not too toasted, staying true to a real bahn mi- were topped by a spread of creamy aioli, crispy pieces of fried tofu and a spicy slaw. Though cilantro and jalapeno played primary roles, each component was detectable, coming together to form a really flavorful dish. The impressive part of this dish (and everything we tried) was that it was vegan- bahn mi's typically incorporate mayo and meat, while coleslaw is also made with mayo. Honestly, no one would ever know that this rendition was missing these somewhat critical components- the dish was a complete as it was going to get. 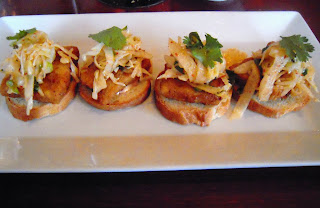 A chose a simpler appetizer- the Butterleaf salad ($8). A stack of velvety Bibb greens was topped with a shave of "Parmesan" and surrounded by a few companions- salty olives that were roasted, giving them a bit of a chew, a scoop of creamy avocado, and a thick smear of sauce with a depth of smokiness. Individually pairing the different components certainly hit the spot in terms of a huge range and variety of flavor profiles and textures. We haven't had good butter lettuce like this in awhile, and it was much appreciated. 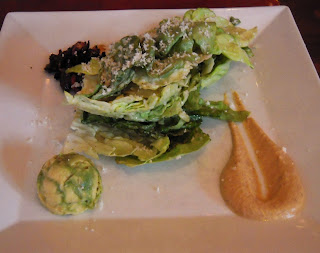 We were both eyeing the Fresh Hearts of Palm cake ($19), but I tricked A into letting me order it. I've only ever seen hearts of palm in a can, and honestly, I couldn't really tell the difference. Big chunks of the soft, delicate vegetable were mixed with a light breading to give it a crab-cake-like texture. The dish had an overall Indian theme- the cake itself definitely had some curry and a bit of cumin- not too spicy, just the right amount of smoky. It was topped by thin strips of cucumber tossed in a mint/cilantro dressing- cool and crunchy, complementing the softer cake. There was also a mix of veggies- small cubes of butternut squash and zucchini- in a coconut curry sauce, as well as the more mild addition of braised black lentils. Though my overall thoughts of the dish were positive, I couldn't help questioning the price tag- I know lentils, HOP, and squash aren't that expensive. Obviously preparing each component takes time and effort, but I still think it was a bit on the steep side. 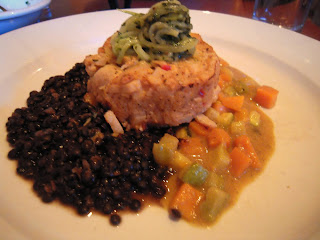 A's choice was a bit more complex- the Cauliflower and Smoked Eggplant Braciole ($19)- making its price tag seem a bit more reasonable. Braciole is typically made by wrapping thin strips of beef or other meat around a mixture of breadcrumbs and cheese- not something you'd expect to see on a vegan menu. Instead, this version utilized thin slices of eggplant, smoked to provide a rich, peppery taste reminiscent of prosciutto. Wrapped inside, crumbled, cooked cauliflower soaked up the flavors from the salsa verde- a thin mixture of pureed parsley, capers, and garlic. The grilled garbanzos and English peas were my favorite- super firm and seemingly just the right accompaniment to the braciole. A didn't love the addition of cherry tomatoes- I suppose they were a little too random? 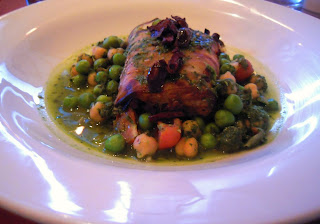 With a slower service and just really taking the time to enjoy each bite, we were pretty full at this point. However, the cute dessert menu, tied to a plank of wood, just couldn't be denied. We both got decaf coffee drinks- a latte for me and a cappucino for A ($3.50 each). For some reason I consider after-dinner coffee a total treat so I probably would have been just fine without "real" dessert. Horizons uses a soy-based milk that was definitely on the sweet side and seemed extra smooth and creamy. 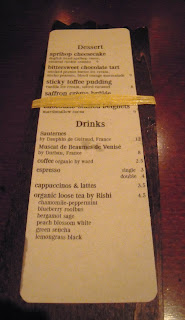 However, we agreed that splitting the dessert with the obvious lowest sugar content was acceptable- so we chose the bittersweet chocolate tart ($9). Starting from the top: the dried blood orange slice. Though reminscent of potpourri, I thought it was pretty tasty- lots of carmelized natural sugars. A took one nibble and had just a one-word response: "Weird." The blood orange also played a role in the marmalade, made with chunks of peel and lots of spice to counter the bitterness. A ball of peanut butter "ice cream" was more salty than sweet- like frozen peanut butter. The creamy chocolate mousse of the tart was heavy on the cinnamon with a slight afterburn of ancho chili. The one (somewhat major) downfall of this dessert was the crust- it seemd storebought/frozen with an uncooked/freezer-burnt taste. Vegan crust just isn't that hard... I know they can do better. Honestly, I liked our own vegan chocolate pie a lot better, but the accoutrements of this version saved it from being a fail. 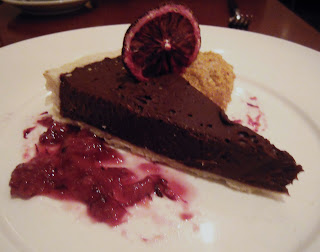 Although the bill ended up being a bit more than I'd like to pay for a meat-free meal, we really have to acknowledge that Horizons fills its role as an upscale, modern vegan kitchen quite well. Even though it was busy, we weren't rushed at all- the meal took a solid two hours- which is a nice change from some restaurants that want you in and out, especially when you don't order drinks. Replacing the cutlery between each course and consistent water refills made up for the grumpy attitude of one of the busboys. The atmosphere was great, the food was really enjoyable- fresh and fun with really thoughtful menu choices. We were really pleased with everything and know that any foodie would enjoy a meal here- regardless of carnivorous status.