While A and I certainly enjoy our peaceful "twin dates" that revolve around consuming food, sharing dishes, and relaxing after a long week of work, we also appreciate the merits of a more social gathering of friends. We've hosted family dinners, partaken in potluck brunches, and gotten large groups together for dim sum. When I recently mentioned that I'd never had Peking duck here in Philly, a knowledgeable friend quickly rallied a group of eight- not an easy task with so many different schedules. 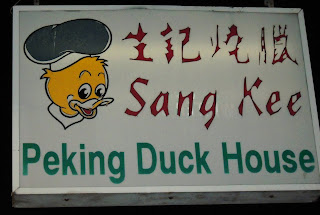 We all met on the outskirts of Chinatown at 6 PM on a Saturday- an unfortunately busy time, perhaps due to the nearby Flower Show. Although we had reservations, we were kept waiting a solid 20 minutes after our arrival- with not an ounce of apology from the hostess. I voiced my displeasure with the situation, but she was like a stone wall- apparently it wasn't her problem. Soon enough, we were seated at a large round table in the back. From here on out the service was adequate- we were provided with pitchers of water and forks for those who requested them without too much of a hassle. Since we were all there for one reason, the menus were unnecessary- we quickly placed our order for two Peking Duck meals ($59.95 each, serves four). (Note: perhaps this place should be called "More Than Just Peking Duck" because there are certainly loads of other options for all palatial preferences). 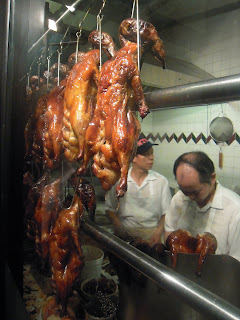 The first dish out was a wonton soup. Two giant bowls were like washbasins of steaming broth. This was no watery soup- there were tons of veggies: greens, baby corn, mushrooms, water chestnuts, and snow peas. The dense, golf ball sized wontons had a somewhat bland mix of sausage hidden inside, but the chewy thickness of the wrapper made for a satisfying bite (or three). Ladeling the soup out into tiny bowls ensured that we didn't fill up on liquid before the main event. 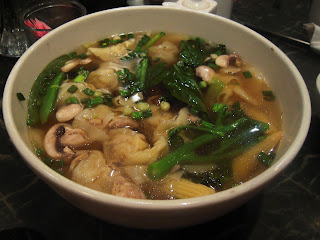 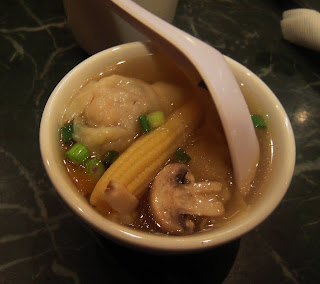 Thankfully, we didn't have to wait long. Traditional strips of crispy duck skin and bits of meat were served alongside floury pancakes, duck sauce, and shreds of green onions. The pancakes were on the large side- actually filling them to capacity would easily use half of the plate of skin. However, the doughy, raw flour taste and thin, powdery texture was a good vehicle for the crackly sweet duck. It didn't seem quite as fresh as other Peking duck that I've had, but it certainly satisfied my "candied meat" quota. 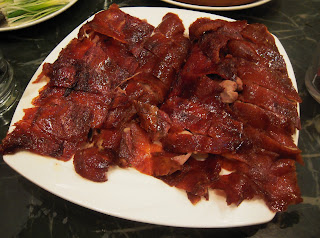 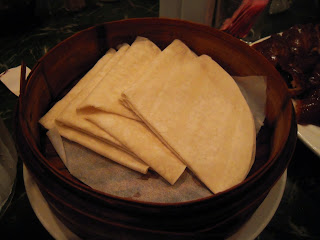 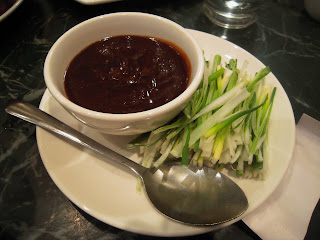 Next up was our second duck dish- more of the meat cooked alongside tons of veggies. One of our friends commented that it smelled like supreme pizza, and we all unanimously agreed with the comparison. It shouldn't have come as a surprise: lightly cooked peppers, onions, and mushrooms with a rich, oily choice of meat- if you piled that on a thick, chewy crust, I'd be perfectly content. Otherwise, the dish wasn't all that remarkable- the meat was a bit lost, though I enjoyed the crunchy vegetables. 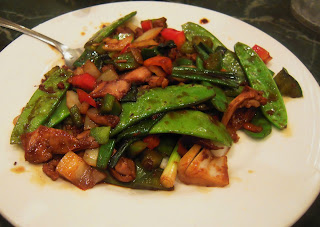 The fried rice was also a little on the boring side- it seemed to be missing the "fried" aspect- no toasty burnt bits of rice here. Some dry scrambled egg, pea shoots, and a few teeny shrimp- can't say I tried more than two bites. Mostly a "filler" dish that none of us really needed. 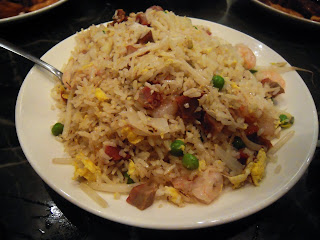 My favorite dish (other than the duck skin) was the chicken and eggplant. Chinese eggplant has a gorgeous purple color, not quite as dark as the regular ones you see in the grocery store. They're also smaller and much more mild- a softer "meat" and more delicate skin. The great thing about eggplant is how it absorbs anything you throw at it- and in this case, it was cooked in a substantial amount of oil, salt, and sugar. Enormous chunks of eggplant maintained their structure but had an incredibly soft, almost velvety texture that didn't require much chewing. Thin pieces of chicken coated in the same sauce played only a supporting role. Excuse the blurry picture- apparently I was much more focused on eggplant consumption than photography. The last dish was a little bit on the random side, but was a table favorite. Large shrimp fried in a thick golden batter made for a super exciting bite: crispy shell and meaty shellfish. The slightly sweet, slightly citrusy creamy sauce definitely put this dish in "heart attack" territory- a few walnut halves, orange slices and a bed of shredded iceberg had it firmly in the "random" category. Nevertheless, we didn't end the meal with a single shrimp left, which says a lot considering the giant stack of take-out boxes we carted home. 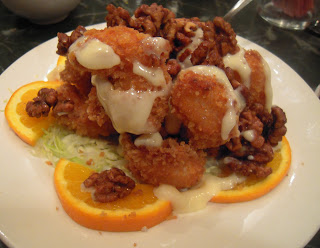 We thoroughly enjoyed a solid dinner with friends in a less-frequented area of the city. The inexpensive aspect made the experience even better- we each threw in $20 (cash only!!) which more than covered the numerous courses, tax and tip. A & I ended up with the remaining eggplant and chicken which made for a perfect work-day lunch- it was even good cold (I don't do reheated leftovers... yes, I know this is abnormal). Hopefully we can plan another venture into Chinatown for some more traditional dishes- any suggestions?