Philly gets kind of a bad rap with food sometimes-- all people think about are soft pretzels and cheesesteaks. While these are fun, quintessential Philly foods, there is so much more to the city than that! But I know I'm preaching to the choir. Still, embracing your city's traditions- whether loved or hated- is a necessity. J and I have been wanting to make homemade soft pretzels for YEARS- literally, we cut out a recipe from Cooking Light when we were still in college. For one reason or another, we've never come around to making them, but with our former-chocolate-truffle-making friend coming to visit, we decided to buck up and make it our weekend morning project.

We began the process before she arrived, since the dough takes some time to come together and rise. We pulled up a trustworthy recipe (thanks, Alton Brown!) and jumped right in. We wanted to make plenty of pretzels to go around, so we doubled the recipe. Super simple, just combine 2 packets of active dry yeast with 3 cups of warm water (about as warm as your tap will go is good), 2 tablespoons sugar, and 1 Tbs. kosher salt. In another bowl (a big one!), dump in 9 cups of flour. We used a mix: 2 cups bread flour, 4 cups all-purpose white flour, and 3 cups whole wheat. Go with what you have, or based on your flour preference. 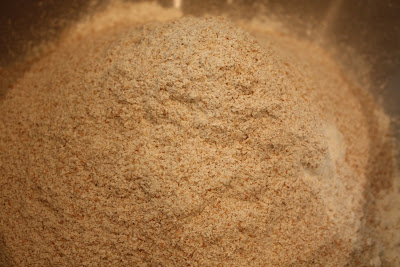 To the flour, add 4 Tbs. melted butter. This will add hardly any moisture to the flour, so don't bother mixing much. After the yeast mixture gets nice and foamy (approx. 5 minutes), add to the flour. If you have a stand mixer, congratulations. Use the dough hook to mix it until all the flour is incorporated. If not, simply begin mixing by hand and slowly kneading in the flour. 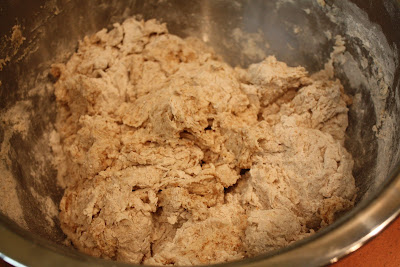 J is the resident bread-maker, so she assumed kneading responsibilities, continuing to stretch and fold the dough for about five minutes, until everything was smooth. 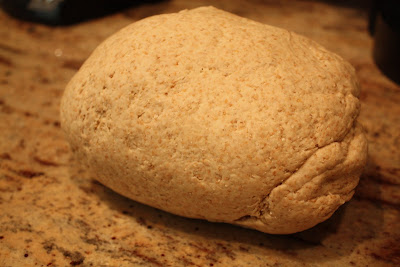 Clean and grease your bowl, and then plop your dough ball in, cover with plastic wrap and place in a warm spot (we chose our sunny window). This single rise takes about 50-55 minutes, and the dough should double in size during that time. We began assembling our "special additions" while the dough finished up. You can make these pretzels plain, but we decided to have fun with it and add a variety of toppings, including cinnamon, brown sugar, jalapeno, cheese, and flax. 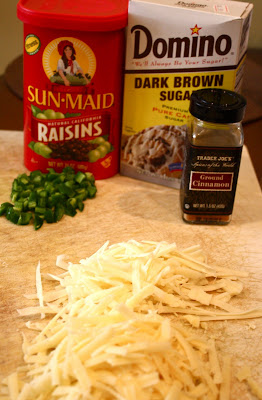 Just short of an hour later, we checked our dough. My finger poke classified it as finished. 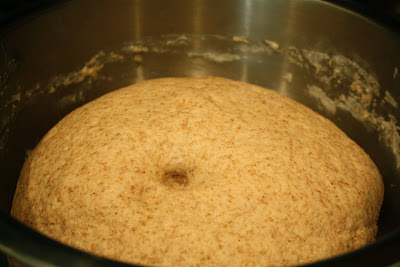 We split up the dough into several large chunks, and each tackled one, adding our mix-ins of choice. It was basically the dough version of Cold Stone. J started with cheese and jalapenos, piling them up onto a stretched out piece of dough and then slowly kneading them in to incorporate. We also made cinnamon-raisin, cinnamon-brown sugar, flax-cheese, and plain variations. 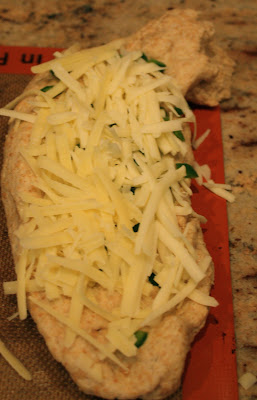 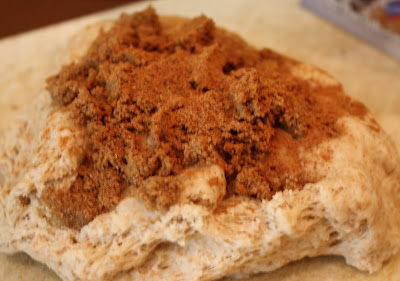 After the additions were completely mixed in, pretzel formation began. At this point, we also got a large pot of water boiling on the stove, and began heating the oven to 450. To make a pretzel, tear off a handful of dough and begin shaping a long rope. The rope should end up being about 3/4 inch in diameter, but its length can vary depending on the size of pretzel you'd like to make. If you want an Auntie Anne sized pretzel, shoot for a 24 inch length. Using Alton's directions, form a pretzel with your rope: "Make a U-shape with the rope, holding the ends of the rope, cross them over each other and press onto the bottom of the U." Place each pretzel onto parchment paper (or a Silpat) when you're done. 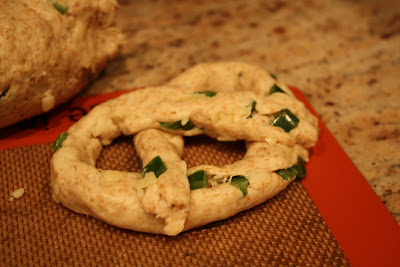 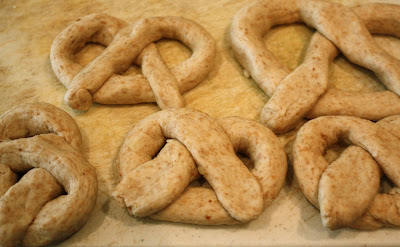 Working out the technique 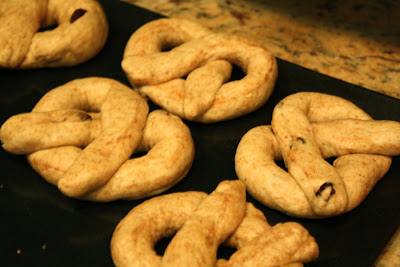 Between the three of us, we made a variety of shapes and sizes, ending up with about 24 pretzels total. If you stick to the jumbo size, this recipe should make about 16 pretzels. Next, the boiling step. To your large pot of boiling water, add baking soda. The alkalinized water helps form a better "crust" on the outer edge. Alton suggests 2/3 c. baking soda for each 10 cups of water, but I didn't measure-- just dumped in a good amount into my large pot. Very scientific.

Each pretzel should be boiled for 30 seconds. I began as per direction, one pretzel at a time, but quickly got impatient and threw in 2-3 at a time. Just be cognizant of your different toppings, and perhaps time each addition accordingly (some of the mix-ins will end up in the water, and you may not want a spicy cinnamon-sugar pretzel). Most of the pretzels sunk upon addition, but like gnocchi, rose to the surface after a few seconds. I held a few submerged with a flat spatula, and flipped a few halfway through their cooking time, but I don't think it makes a huge difference. 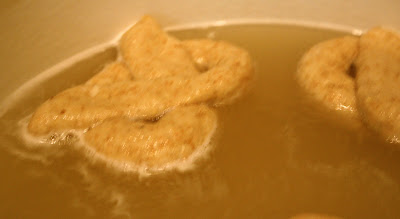 The boiling process makes each pretzel puff up considerably. They look a little water-logged, but don't fear- they'll bake up just fine. Remove them carefully from the pot and place them on a fresh lined or greased baking sheet. 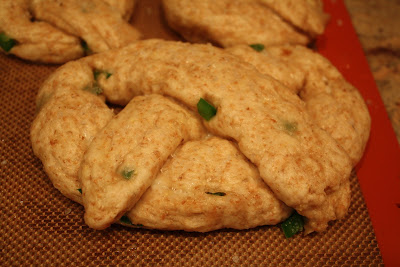 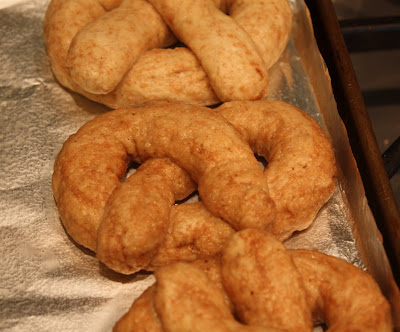 Alton suggests brushing each pretzel with an egg wash (produces a shinier product), but we skipped this step and just sprinkled kosher salt and/or additional cinnamon to each before baking. Since we had so many pretzels, we tried to coordinate boiling/baking efficiently, and began pulling finished product out in no time. Make sure you don't overcrowd your baking sheet or oven; adjust cook time depending on how brown you like your bread. Ours baked for approximately 12-14 minutes, but we did stick a few of the larger ones in for a few extra minutes to finish them up. 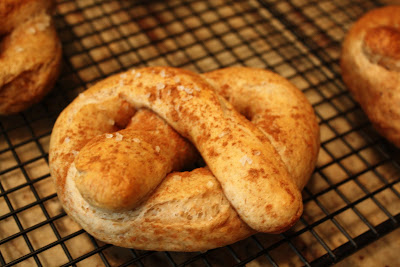 Remove to a wire rack to cool. 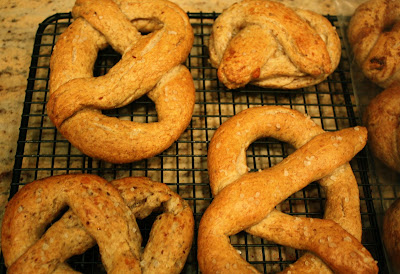 We also constructed a few jalepeno-cheese "pretzel rolls" simply by leaving minimal space between each part of the folded rope. 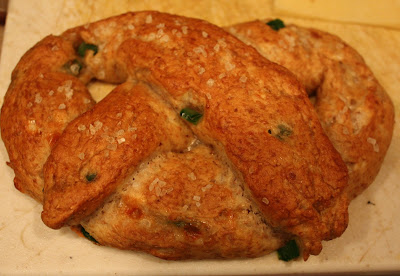 Wishing to take advantage of the beautiful spring weather, we used these rolls to make sandwiches- cheddar, turkey, spinach, and tomato on this dense, chewy roll produced one of the best sandwiches I've had in awhile. 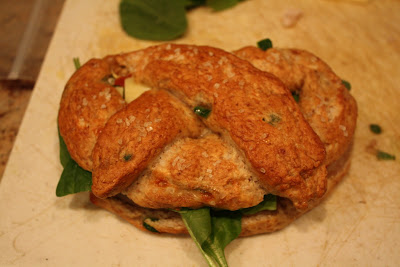 Wrapped up, it made a portable little picnic lunch, and alongside fresh chopped veggies and dip and assorted fruit, was quick and easy to haul over to Rittenhouse. 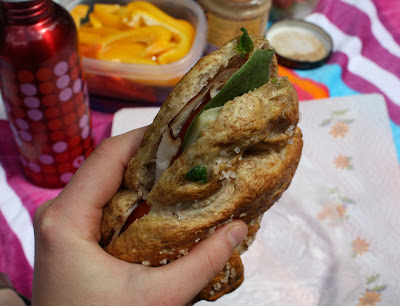 After distributing the rest of the pretzels to friends and family, we ended up with a half dozen various types for ourselves, which we froze and are slowly enjoying one by one. Homemade soft pretzels would be the perfect item to bring to a summer barbecue, and they are pretty much foolproof. Grab a friend or family member and it's even easier (and more fun)!
Posted by A and J at 9:11 PM