As much as we like going out and enjoying the culinary creations of others, we're also suckers for really knowing the story behind the food. There aren't many opportunities to get the inside scoop on a chef or a restaurant concept, which sometimes prevents a real connection from being formed with the eating experience. However, after following the "characters" on Top Chef All-Stars, it was impossible not to feel a vested interest in our favorite chefs careers. While we felt a love-hate relationship with Mike Isabella, there was no doubt we were drooling over his food after every Quickfire Challenge. 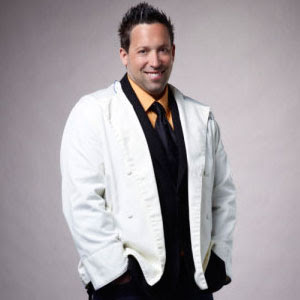 Two months ago, Mike opened a casual Italian-inspired restaurant in Washington, DC. When A & I got wind of this, we immediately started plotting a trip of our own. A quick search of our calendars and a few clicks on megabus.com and we were set- a day trip to DC planned in a matter of minutes. 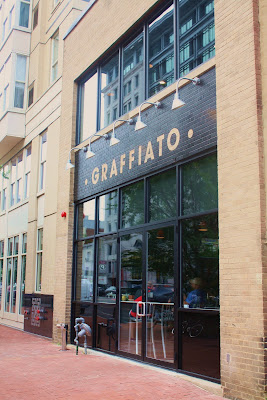 After an afternoon of memorials and art museums, we arrived at our final destination- Graffiato. Located near the Verizon Center in "Chinatown," the two-story restaurant has a hip, urban feel to it- nothing overdone. We were seated upstairs near the window, and our waiter immediately launched into an explanation of the restaurant concept (small plates) and commitment to local, seasonal ingredients. We were also served complimentary "filtered" water and some sweet and spicy roasted pistachios coated in smoky paprika and a touch of chili. 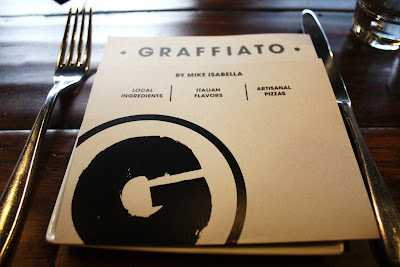 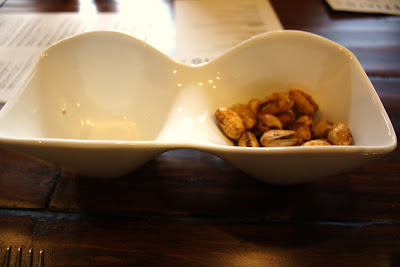 Our waiter suggested 3 to 4 plates per person- we ended up with 6 (including a pizza) plus a dessert, and it was the perfect amount. Our first was a cold vegetable dish, the sweet and sour eggplant ($7). For some reason I was expecting a Chinese sweet and sour dish, so I was definitely surprised by the "bread and butter pickles" element. Chunks of baby purple eggplant and a few pearl onions are marinated in a sugary vinegar concoction until soft, then tossed with fresh zucchini and green pattypan squash. A few pinenuts for crunch (and the beginning of an Isabella pinenut obsession...) and voila! A unique take on pickled vegetables, and a fun way to start the meal. 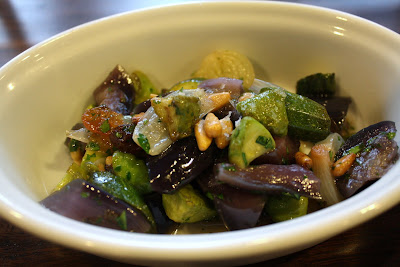 Out next was a highly anticipated dish from the "wood oven" section of the menu- the chicken thighs ($10). Three firm chunks of surprisingly white colored meat, skin intact, had a slightly crispy outside, very succulent inside thanks to the perfect amount of time in a perfectly temperature controlled oven. The skin somehow seemed fused to the meat, making each bite a rich, extremely flavorful little piece of chicken. However, the obvious winning component of this dish is the "pepperoni sauce" that made Gail Simmons throw an absolute fit of joy on Top Chef. You can imagine what it tastes like- a literal pepperoni puree that makes you think of pizza and calzones and other delicious things. A spicy intenseness that paired well with the simply done chicken. We wiped the plate clean. 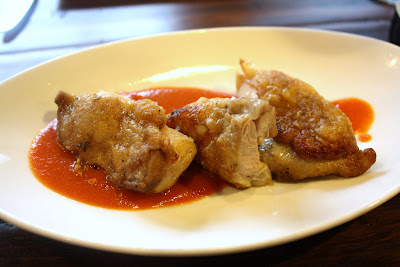 Our third dish was probably the most complex of the evening- a "kaleidoscope" baby carrot salad ($8). The base of the salad was actually a grain- farro- tossed in a light mint vinaigrette. A subtle sweetness from chopped dates infused the grains, pairing well with the herby mint. Tiny baby carrots of varying colors (white, orange, purple) were roasted whole, tops on, until caramelized and soft. A bit of roasted radicchio is also added to the mix, offering some bitterness to counteract the sweet roots. Crunchy shavings of raw white and orange carrots lay atop the salad, and on top of THAT is the best part- thin slivers of lardo- a cured fat that was like a melt-in-your-mouth flour and butter candy. Almost like a shortbread. We loved everything about this "salad", from the firm grains to the sweet dates to the buttery lardo- the carrots were almost an afterthought. 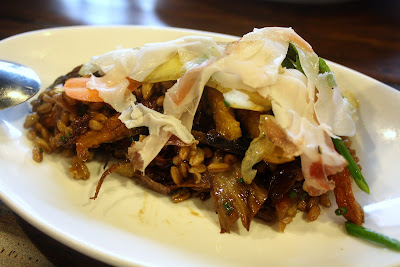 Served at the same time as the salad was my absolute favorite dish of the night- the roasted potato gnocchi ($12). While the gnocchi itself was fine- fluffy, creamy, and a bit buttery, the pool of pork shank ragu on which it sat was absolutely ah.may.zing. I definitely have a problem when it comes to slow cooked pork, but this really raised the bar. I literally sat for a solid three minutes with a mouthful of tender shredded meat, refusing to swallow in fear of never tasting something so good again. Any description of flavor won't begin to do it justice, so I'll leave it at that. Shaved parmesan, enormous fresh peas, and a few sprigs of spicy arugula were icing on the cake. 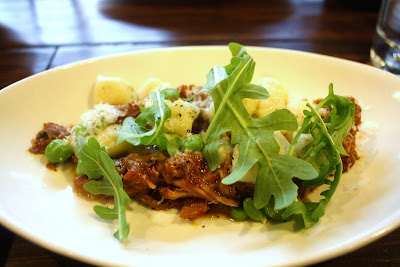 We're always seeking out good pizza (we inherited the pizza gene directly from our dad), so we chose the Jersey Shore ($15), a somewhat ridiculous combination of fried calamari and cherry pepper aioli atop a more traditional tomato and provolone base. Six small-ish slices of thin crust pizza were definitely floppy under the load. There wasn't much crispiness, leaving the outer crust chewy and doughy. 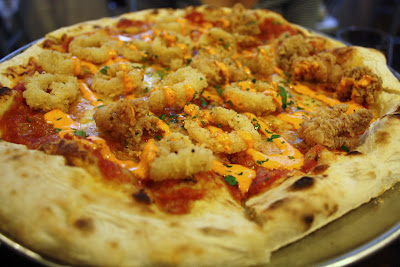 The calamari, on the other hand, was super crispy with a thick breading, though without being overly greasy. The aioli was exactly like the spicy sauce you might find drizzled over your favorite sushi roll, it would also serve well as a dipping sauce for calamari. While we loved the concept- something unique and over-the-top- I can't say calamari really belongs on a pizza. The toppings and the underlying pizza itself didn't "marry" well, it was more like two separate dishes. Additionally, the pizza sauce itself is a tad too sweet for our standards, which somehow blended with the aioli to form a slightly unpleasant sourness. 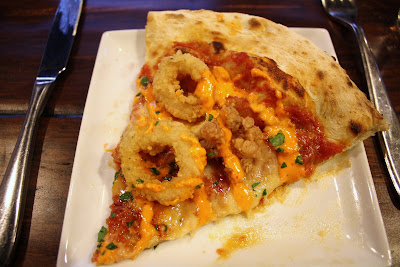 Out of the kitchen last (it required a reminder to our waiter) was the sweet corn agnolotti ($11). Fellow diners raved about this dish, but it wasn't my favorite. The lasagna noodles were soft and slippery- a great texture for sure. I must be used to eating whole grain pasta, but I didn't think it had much in the way of flavor. Seven noodles encased small pockets of sugary creamed corn that pooled out onto the tongue with each bite. A few chanterelle mushrooms, an additional drizzle of sweet corn sauce, and a few pine nuts for crunch finished the dish. The dish definitely needed a crunchy element, but the slight saltiness of the pine nuts was completely drowned out by the corn. I think you get the point- this dish is sweet! A little too one-note for me to really get behind it. 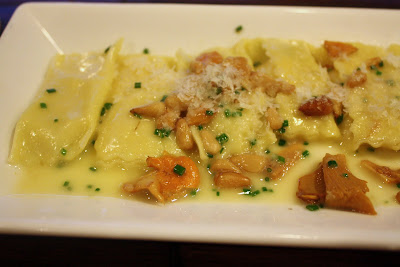 Though the majority of our plates came out all at once towards the beginning, a moderate wait for the last pasta dish, paired with the fact that the dishes are on the small side (plus two pieces of pizza boxed up), allowed us room to split dessert. Options are limited, but the chocolate tart ($8) sounded great. Chocolate, salt, and olive oil are a tried and true combination, and this was no exception. A pine nut crust was a nice twist (yes, more pine nuts), the olive oil had the high quality aftertaste of lemon, and the creamy sea salt gelato perfectly complemented the fudgy chocolate of the tart. I enjoy eating my desserts in small bites, so I do wish the chocolate was a little darker to make each bite a bit richer, but it just forced me to take big bites. 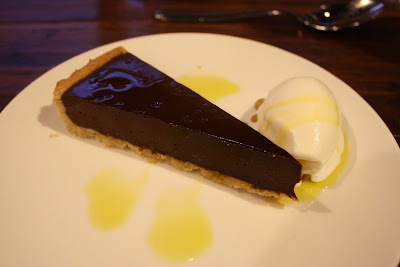 During our meal, Mike Isabella came out of the kitchen several times to greet and speak with diners (mostly women..). By the end, we had to track him down right outside the kitchen downstairs. We complimented him on his two-month-old baby (the restaurant..) and suggested the pepperoni sauce be used to make buffalo wings (he claims that was the original plan). We also told him we had made the trek down from Philly- he said that Philly is "too small" for him to consider opening a restaurant here (really???) Overall, the trip down was absolutely worth it. Does Isabella's stint on Top Chef probably add unnecessary hype to Graffiato? Absolutely. While this certainly wasn't the best meal of our lives, it was pretty darn good, hype or not. 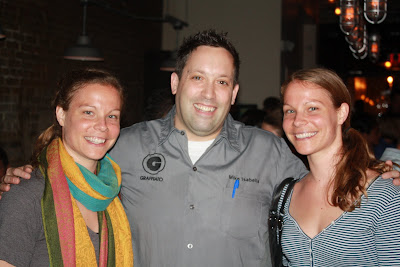 Graffiato
Washington, DC
Posted by A and J at 7:16 PM