Another weekend, another quick trip- at least that's how I feel every time I travel! This time, we headed to Charlottesville, Virginia, home of the beautiful University of Virginia (side note: J and I decided we wanted to go back in time and redo college here, it's that amazing). The goal was to visit a friend and explore the area, and of course we did that mostly by eating. We were sent a list of possible places well in advance, and like the OCD foodies we are, we scanned the websites and menus to narrow it down. We were looking for two things: not too expensive and unique to Cville. Almost as soon as we arrived, we headed out to dinner, at The Shebeen. A word of Irish origin (South African is a motley crew) meaning an under-the-legal-radar pub, it advertises itself as a South African restaurant "styled after the Cape wineries." 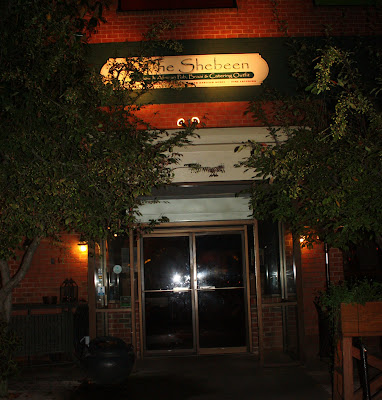 Walking in, I was struck by the space and the decor- a lovely outdoor patio shaded by leafy trees, cozy couches and armchairs near the bar area, a candle-lit dining room filled with African masks, dark wood, and paintings and rugs tinted with deep reds and oranges made me feel like.. well, I was at Animal Kingdom in Disney.  But, perhaps that is authentic.  Before we could finish perusing the menu, we were brought a basket of warm, fluffy rolls to ward off any effects of hanger (eating late had me hungry to the point of irritation). 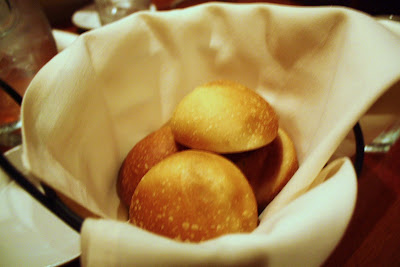 The menu resembles a hodgepodge of international cuisines, featuring some classic American dishes with South African twists (think chicken wings coated in a peri-peri chili sauce instead of typical American buffalo style hot sauce), a few Indian-inspired dishes such as samosas and lamb curry, as well as some interesting I've-never-heard-of-THAT kind of things.

J and I decided to split several items so we could try more of the menu, and started with a bowl of the Cape Malay Curried Corn Chowder ($5).  A thick, creamy base made with generous amounts of curry paste and coconut milk was filled with roasted corn and potatoes and bits of celery and onion, all of which gave it a heartiness that was surprisingly filling. 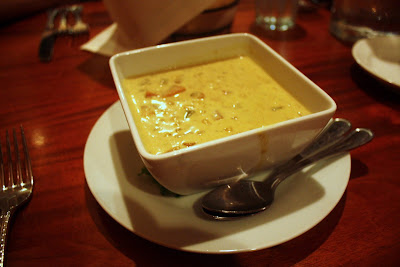 We also split a Stellenbosch Sampler (many of the dishes are named after South African towns) with the rest of our table, which included spiced beef and lamb samosas, spicy ginger-tinged chicken satay, and tempura-battered eggplant fries ($12).  The plate was full of flavor, some of it almost unfamiliar to my palate.  The three accompanying sauces- mango chutney, peanut sauce, and banana ketchup brought even more zing to the mix (the banana-based sauce was particularly odd).  The eggplant fries were our favorite, although they were oil-saturated, as eggplant tends to get.  The samosas had a heavily curried dark filling, which I would have loved to enjoy as a spread for bread- in its fried shell, it was a little overwhelmed. 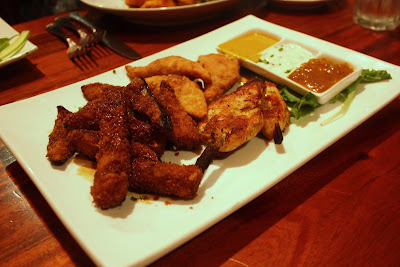 Our table also split the Camps Bay Calamari (catching on to the trend, are we?) ($12), which was pretty run of the mill, but had us discussing our favorite variations of calamari for quite awhile.  Tossed in a spicy sauce before a quick tempura batter, the thick, chewy squid rings had the right texture but just too much oily breading.  Served with a few lettuce leaves and a side of Caesar dressing, it also seemed a little confused. 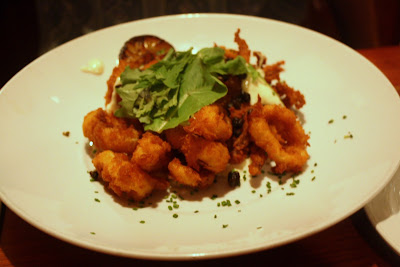 For our entree, we split a meat-based meal that was easily our favorite of the night.  As one of those words on the menu that confused us, we had to order the Sosatie ($20).  Wikipedia explains it as an Afrikaans word that describes a traditional South African dish involving skewers of meat- which is exactly what we got!  In this rendition, large chunks of lamb are marinated for 24 hours in a tamarind-spiced sauce, and then cooked to order (medium-rare, of course).  Skewered with soft dried apricots, the sweet spiciness of the sauce came through in each bite while still allowing the rich, meaty flavor to dominate. 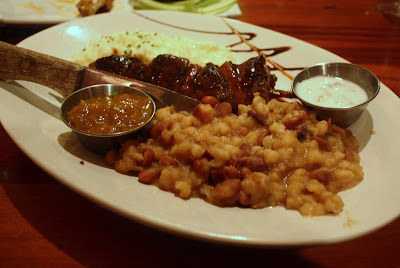 The dish is traditionally served with yellow rice and samp+beans, but our waitress heard us giggling about one of the side options "Mealie Pap" and after she explained that they are cheese-tinged grits, we traded out the rice for the Pap.  Heh.  The two sides were both perfectly done, and had me scooping up a bite of one and then the other while forgetting about the centerpiece meat.  The grits were perfectly smooth with a rich flavor that can only come from generous spikes of the grit triumvirate: cheese, cream, and butter.  The samp and beans were even better though- a combination of white and kidney beans cooked to a creamy mush with samp- which I mistook for hominy.  Samp refers to corn kernels that have been cracked by hard pounding and stamping.  It was a lovely, unique addition to the beans, one that I would never come up with myself but now need to replicate.

The dishes we tried are a good reflection of the offerings of Shebeen- some of which are tried-and-true (samosas and calamari), and some of which are unique to South Africa, giving us an opportunity to expand our food knowledge as well as our palates.  The friendly, knowledgeable service, interesting decor and great company helped take this meal above and beyond the food alone, and together left us with fond memories and a strange desire to visit the tip of Africa.

The Shebeen
Charlottesville, VA
Posted by A and J at 9:03 PM