A couple of years ago, I came upon an article in the New York Times, describing a small group in New York City who followed a certain diet and lifestyle, and called themselves "The New Cavemen."  I remember being slightly horrified at the fact that many of them ate raw meat, practiced regular fasting, and had meat lockers full of animal organs.  Somehow, this strange way of living has become more mainstream, but thankfully has tamed down a bit as well.  Now simply called "Paleo," the diet/lifestyle (which actually dates back to the 1970's) mimics living as our hunter-gatherer ancestors did, subsisting on animal products and plants, undergoing brief but intense bouts of exercise, and reducing stress, all in the name of better health.

The paleo diet reverses a lot of popular diet mantras, such as embracing saturated fats and following hunger cues instead of eating three square meals a day.  It seems pretty novel, but actually has some similarities to the longstanding South Beach and Atkin's Diets.  I think men (and women!) just enjoy thinking of themselves as cavepeople.  While it can be used as a weight-loss diet, it also may improve symptoms of many autoimmune disorders. 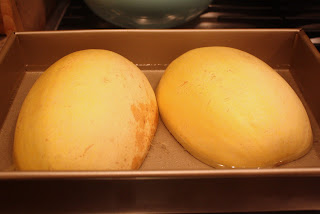 To test out the paleo trend, we made a mini-Paleo feast for a friend following the diet/lifestyle.  A spaghetti squash in our CSA made it easy to decide what to make- Paleo spaghetti!  To start, I cut the squash in half, removed the seeds, and it lay cut side down in a pan with 1/2" of water.  While it baked at 425F, I got to work on the sauce.
While substituting squash for regular pasta is a paleo-necessity (grains came after the agricultural revolution), the sauce was pretty much anything goes.  I typically make a red sauce starting with fresh tomatoes, deseeded.  I also wanted to bulk up the sauce with a variety of vegetables, so added diced baby portobellos, spinach, and onions, along with chopped garlic and a sprinkle of oregano, thyme, and sage. 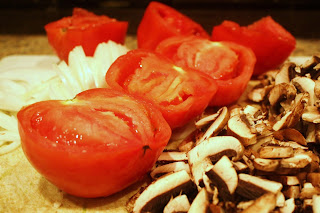 Meat is the staple of the paleo diet, so of course that was a must-have for the meal.  Humanely treated animals are preferred, as is organic everything- if you're going to go au natural caveman style, you should probably avoid pesticides, hormones, and antibiotic-treated animals.  I also made sure to avoid the lean ground beef- fat and protein make up the huge majority of calories consumed, so the more the better. 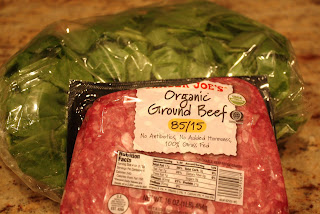 Once everything was in the pot, I let it simmer for half an hour.  I also added a can of tomato paste, since it adds intense flavor and richness to red sauce.  Cavemen had tin cans, right?

Once the sauce was a hands-off affair, I turned my attention back to the squash.  After 30-40 minutes, the skin should be supple and easily pierced with a fork.  Remove from the oven and flip over after draining the pan.  Carefully (it's hot!) use a fork to scrape the squash from the edges into the center- it will come away in threads, thus the "spaghetti" part.  Continue scraping until the skin is bare.  I piled all of the innards in the pan and added olive oil, salt, and pepper for a bit of extra flavor.  While spaghetti squash LOOKS like spaghetti, it doesn't exactly taste like it. 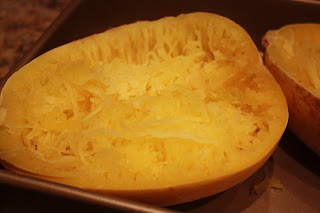 Once the sauce was ready to go, I quickly assembled the meal- a small pile of noodles... 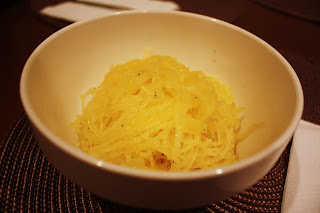 ...topped with a heaping pile of vegetables and meat.  The sauce ended up a bit more like stew- just how I like it.  Full of chunks of soft onions and tomatoes, with plenty of richness from the ground beef. It was filling and really delicious- I would probably make this even if I wasn't following paleo rules (and for the record, I'm not-- just one meal).  The huge pile of squash was fun to eat and didn't leave me feeling tired and stuffed like a big serving of pasta would. 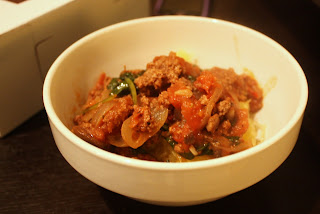 Since I DID say this was a paleo "feast," of course that wasn't the end of the meal.  J also whipped up a quick dessert- an apple crumble.  Desserts are a little bit harder to navigate, since added sugar is a big no.  Thankfully, natural sugars such as that found in fruit are more than OK, and provide a great base for a twist on a classic treat.  First, she sauteed apple slices in a small amount of water and a hefty sprinkle of cinnamon.  Eventually, they released their own juices and began bubbling just like an apple pie.  The cooked apples were then added to a pan and topped with the crumb topping, which included: 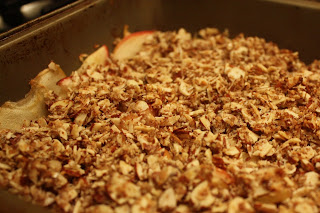 Baked just long enough to crisp up the topping, the dessert was a great end to the meal- a little something sweet without being heavy or needing an accompanying insulin shot.  The sliced nuts and spices made it seem extra treat-like.

While I won't be joining the bandwagon on this diet/lifestyle, I definitely see the perks.  I also can understand, scientifically, the basis behind the idea and wholeheartedly agree with many of their mantras.  A night of paleo in our household was a fun adventure that was quick and tasty- I'm sure we will do it again!

For more information about the diet:
The Paleo Diet
Robb Wolf

For Paleo in Philly:
Paleo at Penn
CrossFit Center City