After a couple of months of enjoying the post-engagement bliss, I've jumped feet first into wedding planning.  We're trying to keep it a casual affair, but obviously good food is pretty important to me!  We thought barbecue would be a good option- nothing fancy, just some good Southern down home eats.  In order to keep things as tasty as possible, we're in the midst of researching as many barbecue-based catering companies in the area as we can.  First on our list: Zachary's BBQ.  Unlike many caterers, Zachary's also has a restaurant of the same name- perfect for taste testing.  The restaurant is actually quite a few miles out in the burbs, in a quiet area of Norristown, slightly awkwardly adjacent to a gas station.

The place was pretty quiet on a weekend afternoon, so the man behind the counter had all the time in the world to chat us up.  He gave us a full "tour" of the food options available-- free samples of most items are offered to help you make your decision.  We each chose a meat platter, which comes with two sides and the option of a roll (to make a sandwich) or cornbread.

I chose the beef brisket, which is thinly sliced and coated in their signature barbecue sauce ($9.95 for the platter).  The beef was soft and flavorful- with a blackened edge and inner pink rim that are the sure signs of authentic hickory smoked meat.  A touch of fat along the middle added to the flavor without being too greasy.  The sauce gave it an extra spicy, salty zing- not really necessary, but a good addition nonetheless. 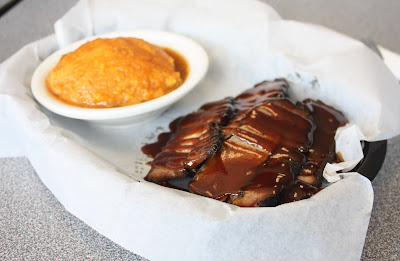 J chose the pulled pork platter ($8.95), which is always our favorite barbecue option.  The pulled pork came in a funny jumbled pile-- perhaps I'm used to it on a bun.  The crispy edges and the soft inner strands of meat were done just right- I can't say enough about the quality of the barbecue here.  Zachary's does their pulled pork (and chicken) Carolina-style, with a good dose of a vinegar-based sauce.  We usually wouldn't choose this style, but here it worked perfectly- just a hint of vinegar let the hickory smoke flavor shine through. 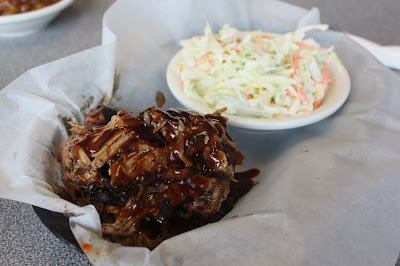 I picked an assortment of sides- there are at least a dozen options, but I tried to stick with the classics, since they will most likely be what we will order for our wedding day.  The maple mashed yams (top picture) were one of the only disappointments of the day- overly sweet with an artificial maple flavor. If there is one thing I'm a real food snob about, it's real maple syrup.  The cole slaw (above) was simple, sticking to the classic combination of shredded cabbage and carrots in a thin, mayonnaise based sauce.  I don't love super-thick-mayo coleslaw, so this hit the spot- cool and refreshing. 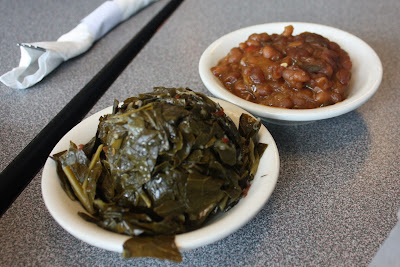 The collard greens were my absolute favorite side we tried.  Collard greens tend to be either too plain or too salty, but these found a happy medium.  The bite sized pieces were boiled until soft, but not wilted, and the addition of smoked turkey countered the earthy flavor of the greens.  I find it weird to be waxing so poetic about collard greens, but these things were great.  The BBQ baked beans- one of my favorite traditional BBQ sides- were done with a Caribbean twist (the head chef and owner, Keith Taylor- not sure who Zachary is- is of Caribbean descent).  Bits of canned pineapple added textural contrast to the beans, but also provided a saccharin sweetness that I didn't love.  To each their own- props for lending your own touch to a dish, but I personally prefer a more classic flavor. 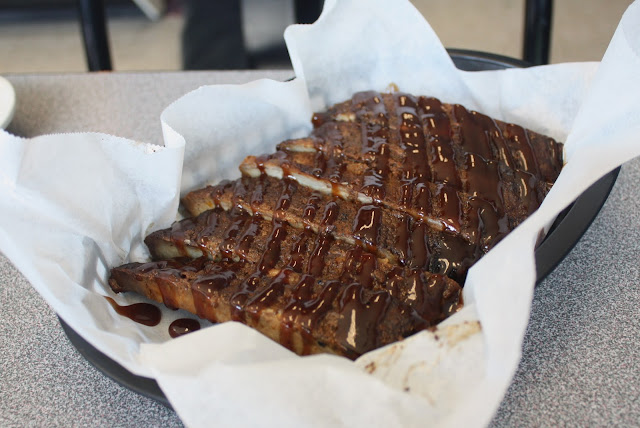 Even though we probably won't serve ribs at our wedding (what do you think-- too messy?), my fiance chose to order the pork ribs as his meat of choice- and I don't blame him.  They looked delicious!  A half rack (5-6 large ribs) runs you $16.95 for the platter, but is worth every penny.  Dry-rubbed before a long, slow roast, the ribs were also coated with the signature sauce (I really should have bought some of the stuff to go!). 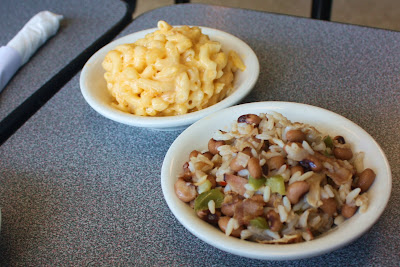 We also tackled an additional two sides, the macaroni & cheese and Hoppin' John.  Mac n' cheese is a necessity for Southern barbecue, and this one was spot-on.  Creamy, cheesy, chewy noodles without a dry spot to be seen.  I'm skeptical about the claim of FOUR different types of cheese, but whatever they're using, please keep on using it.  The Hoppin' John is a bit untraditional for a barbecue, but is classic Southern... plus, I have a secret obsession with black eyed peas.  The little beans are mixed with rice, chopped onion and bell pepper, bacon, a touch of vinegar and a variety of spices.  Super flavorful and very hearty, I could easily eat this as a main course. 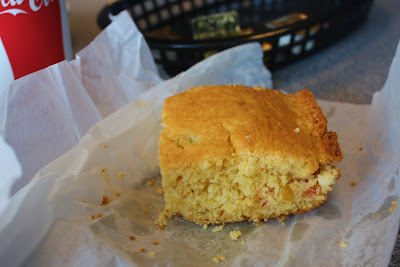 Our final food to tackle was the cornbread, a true test of Southern baking.  Each chunk of bread was individually wrapped in wax paper and served warm.  The texture was a good mix between crumbly and cake-like, but a bit lacking in the corn flavor.  Little bits of red and green pepper studded each bite, adding a tiny dose of heat.  The bread was fairly sweet- again, I'm a bit more traditional and prefer a more savory cornbread, but I DID manage to eat my entire slice (plus, cornbread at all is hard to come by in Philly).

Overall, we left very satisfied with the meal- delicious, quality meats and a large variety of solid sides.  I would be more than happy to eat this on my wedding day.  I'm still not completely sold on the catering side of things, but I definitely recommend Zachary's as a good spot for barbecue- perhaps the best I've had in the Philly area.  While it is forty minutes from the city, if you're craving true Southern cooking, it's worth the drive.