There are a lot of culinary adventures I have yet to take- both at restaurants and at home in my own kitchen.  Some just seem scary to me, which is why I hesitate to move outside my cooking comfort zone.  One of these is risotto.  Perhaps I've watched too many episodes of Top Chef, with contestants warning other contestants to stay away from risotto, since it's apparently quite easy to mess up.  I don't even order it at restaurants, since I just assume it won't be good.  Plus, there's that whole stirring-your-arm-off-for-an-hour thing.  Recently, I decided to face my fears and make a simple risotto.  Of course, I had to make it cheaper more challenging by using a grain I had in my pantry- bulgar wheat. 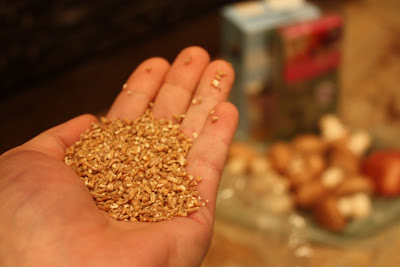 If you've never tried bulgar, it's a crushed wheat grain that has been parboiled and then dried.  It has a very nutty flavor, and cooks up with a texture similar to couscous- it's the grain most commonly used in tabbouleh salad.  In order to make a complete dish, we hit Whole Foods for a few extra ingredients.  A very rare occurrence for us, but we'd been holding on to our Living Social deal for a special treat. 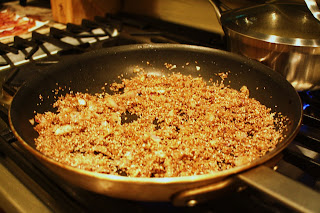 I started the risotto by heating 3 cups of the chicken broth (you can use vegetable or mushroom broth to keep this dish veg friendly) with 3 cups of water, keeping it covered at a simmer.  One of the shallots was then finely diced and sauteed in a tablespoon of olive oil, until softened.  I then added a cup of bulgar wheat, and allowed it to toast in the pan for a few minutes before adding 1/2 cup red cooking wine- but white will also do fine.  Allow the liquid to absorb/steam off before moving on to the next step. 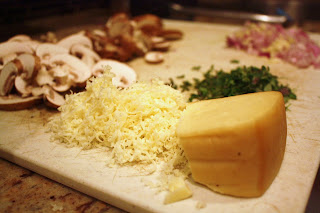 In the meantime, I prepared my mise en place by slicing the portobellas, chopping the second shallot, finely grating the gouda, and plucking leaves/finely chopping the thyme.  This prep work helps make a hands-on dish a lot easier once everything gets going!

The next 45 minutes were spent in similar fashion: add the warm water/broth mixture to the pan, stir it into the bulgar mix and allow it to absorb.  The first two broth additions should be voluminous- about two cups.  After those are absorbed, add an additional cup, and then begin adding in 1/4-1/2 cup increments towards the end.  Risotto- at least of the bulgar form- really isn't as difficult as it seems, however.  Once each new addition was stirred in, I would allow it to simmer on it's own for the most part, just giving an extra stir here and there maybe every minute or so.

After the first liquid addition, wait until the bottom of the pan is dry before you add the next.  The risotto should be able to be pulled away from the bottom of the pan and remain solid.  I'm at a loss for WHY this must occur, but I just follow instructions.  I do know that the use of a large, flat, open pan allows for evaporation of a good amount of the liquid you add, which intensifies the flavor of the broth in the final dish. 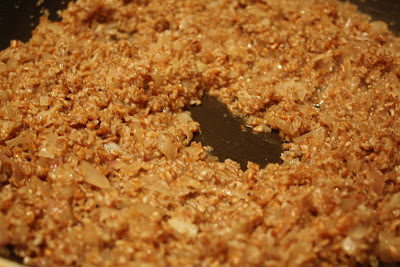 Once I felt comfortable letting the risotto do it's thing, I started on the sauce.  Since we were making a separate protein component, I kept it simple with a mushroom focus.  The baby portobellas and the second shallot, along with a chopped clove of garlic, were sauteed in butter until softened.  An additional 1/2 cup of red wine was added to this mix as well.  Immediately prior to serving, a sprinkle of dried rosemary and the chopped fresh thyme were stirred in, adding a rustic, woodsy flavor. 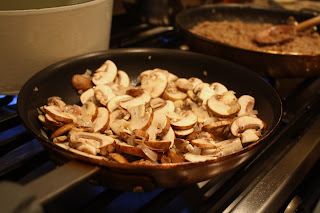 After all of the liquid had been absorbed into the bulgar, I was left with a porridge-like pan of cooked grains.  While typical risotto using Arborio rice should maintain a texture of individual grains, the smaller size and shape of the bulgar made a significantly creamier final substance- a bit like slow-cooked steel cut oatmeal. 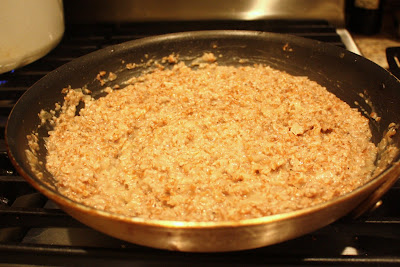 In order to bring the final dish to the next level, we stirred in a couple large handfuls of the grated cheese, and then served it with the mushroom suace. 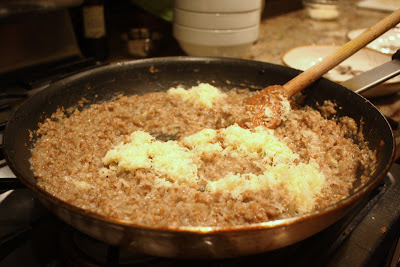 The creamy wheat and melted cheese were just right for each other- the nutty flavor of the bulgar and the smokiness from the cheese made this a bowl of delicious comfort.  While we could have used a braised meat or eggs as a topping, the mushrooms seemed the best choice, providing an earthiness that was a good match for the rustic risotto. 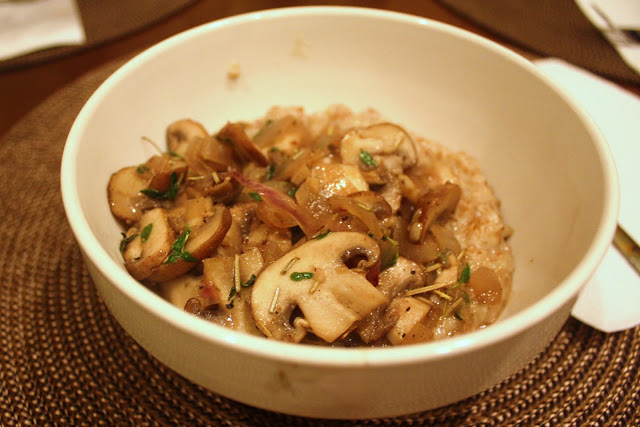 With the colder months moving in, I have a feeling we'll be spending more time in our warm kitchen- and dishes like this, while more time consuming than I'd like for a weekday, make a special winter weekend treat!
Posted by A and J at 5:57 PM