As undergrads at Penn, we were guilty of being stuck in the "Penn bubble."  Yes, it unfortunately does exist.  On the rare occasion we would make it to Center City for dinner, we usually stuck to the obvious high-profile spots, like Steven Starr's Midtown Continental and Buddakan.  Saved for extremely special occasions, of course.  One of our friends thankfully explored the city a bit deeper than we did, and introduced us to what I have since called one of my favorite restaurants in the city- Lolita.  The first restaurant opened by the now infamous Queens of 13th Street, Marcie Turney and Valerie Safran, Lolita remains a solid neighborhood spot.

It's recently been weighing on me that I haven't been to Lolita since the birth of this blog-- almost two years ago!  In an attempt to remedy this situation, I decided my next date night would be spent here.  One of my main concerns was the lack of weekend reservations- and needing a 7PM table on a Saturday, I thought we might be in for a long wait.  Thankfully (?), horrible weather helped our case, and we scored seats immediately.

The tiny dining room slowly filled up, but our front corner spot allowed a respite from the noise.  The service was excellent, efficient but with enough personality and knowledge to help us make our decisions.  After ordering, we were brought a basket of freshly fried corn tortilla chips with two salsas- a vibrant pico de gallo and a spicy salsa verde with a hint of lime.  These chips have been the death of me through several visits to Lolita- they are the perfect start to the meal but tend to fill you up fast-- AFTER you've already ordered multiple menu items. 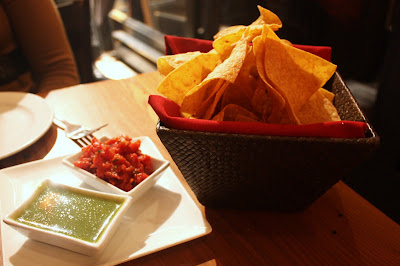 We decided to split a single appetizer (since I knew about those chips...), and easily settled on the pork carnitas tacos ($10).  A "make it yourself" dish, it comes with a heaping bowl half full of sweet shredded pork, with accompaniments of creamy guacamole, pico de gallo, pickled red onions and a few random pea shoots.  Under the bowl, four homemade corn tortillas steam in a napkin blanket, waiting to be stuffed and devoured. 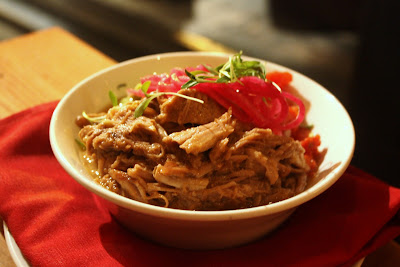 The shreds of meat were full of flavor from the long braising in an orange-ginger glaze, and were well complemented by the choice of toppings- especially the guacamole.  The tortillas had a flour texture with the corn flavor, giving us the best of both tortilla worlds.  I kind of wish they sold them to go.  The unfortunate part of this dish is that it is slightly too big- after eating my two tacos and using the leftovers filling as chip dip, I was full.  Don't worry- I forged on. 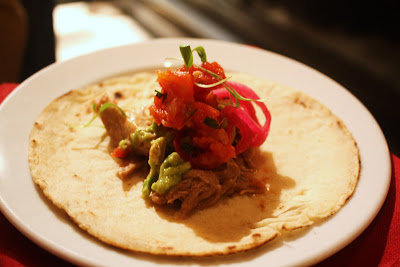 I was sort of worried about taking my unadventurous significant other here, but he surprised me by being unable to choose from the list of entrees- since so many of them caught his eye.  He finally settled on the braised shortrib, since the description promised smoky bacon potatoes ($24).  The dish was arranged in an unusual way, with a deep pool of gravy enveloping large chunks of boneless shortrib, as well as smaller roasted potatoes.  That large chunk of green on top?  Sauteed swiss chard- which went directly into my stomach.  The flavor of the gravy was intense- it could have easily been served over polenta for an Italian twist, but the meat was almost too one-note from its endless braise.  It was likened to "pot roast," which to me is a great thing, but at a Mexican-influenced restaurant, was slightly disappointing. 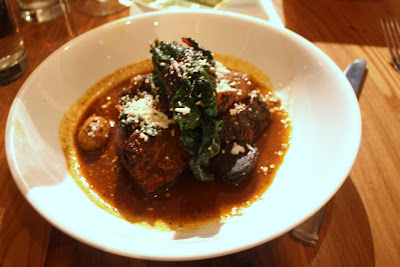 I wanted a lighter option, so chose to order the Salmon a la Plancha ($21).  Served over tender hearts of palm and crispy jicama with a shaved asparagus salad, it was something I could order at a restaurant every weekend and still be happy.  The salmon was perfectly cooked, flaking apart over the island-inspired vegetables below.  I'm a huge fan of jicama, but the large spears of it were too much- small, crunchy bits of the almost flavorless root are preferable over large mouthfuls.  Unfortunately, I have to admit to being too full to completely appreciate this dish- I think if I had started my meal here, I would still be dreaming about it. 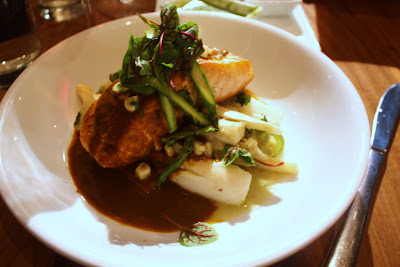 Since I've experienced the wonder that is Lolita's dessert menu many times in the past, I knew we had to share one- and it wasn't difficult to choose the Pastel de Queso ($7).  This cheesecake is honestly like no other, thanks to three superb decisions on the part of the chef.  First, you start with the cheesecake itself, made with local goat's milk.  The ever-so-slight goat flavor adds an extra dimension that cow's milk just can't provide.  Second, the crust is made with dark chocolate and ancho chilis.  A bit unconventional, but a flavor combination made in heaven- you almost don't notice the slight heat, you're just wondering why it's so amazing.  And finally, the absolute piece de resistance, the pool of salted caramel that the cheesecake swims in.  This stuff, in a jar, with a spoon, thank you.  You find yourself wanting to lick the plate.  I promise.  Unless you're so full you need to loosen your belt.. but that's another issue. 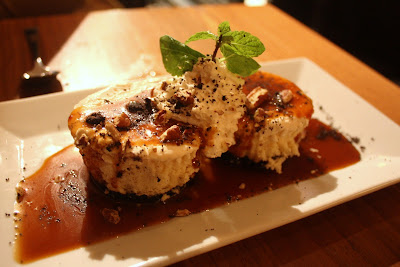 After far too long, it was great to get back to an old favorite.  While it doesn't have the wow factor that some of the up and coming restaurants have (like the newest Turney-Safran joint, Barbuzzo), it has been churning out consistently solid meals for almost eight years- and in this city, that's saying a lot.  It was also fun to relive some of the memories I have from past meals here, including savoring the same flavors (Hello, cheesecake!  Missed you!), as well as being able to share them for the first time with a Lolita newbie.  I hope it maintains its spot on 13th Street for many years to come.