To kick off the Christmas weekend, we made plans to celebrate with a good dinner out.  With my parents visiting for the holidays, we wanted to choose a restaurant that would cater to a variety of palates and would offer a fun dining experience.  Since there are seemingly three dozen new-ish spots open in town, we also decided to cross one of them off of our list, and settled on Sbraga.  Even though we like Top Chef, we never considered Kevin (Season 7) one of our favorite contenders.  However, he has quite a good reputation, and has been getting lots of good buzz since the opening of his first restaurant here in Philly.

Prime time reservations were impossible to snag, so we ended up going a little later than I would have liked.  The fixed price menu (either $110 for ten courses or $45 for four) is a bit of a novelty to us, but I actually really liked basing my decisions solely on what I was in the mood for, and not on price.  While perusing the options, we were each served a massive flaky popover.  Even though it's hollow, it's still a hefty start to the meal, and likely the best complimentary bread I've ever had-- fresh out of the oven, warm and buttery, with a hint of truffle oil.  After my dad's first bite, he attempted to steal the rest of ours and pile them on his plate-- nice try. 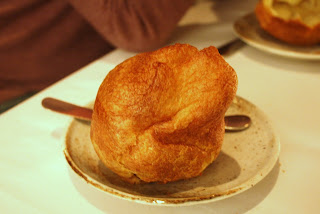 Two notes about service: 1) When we were first seated, our table had white linen napkins.  After we were seated, the napkins were taken away, and replaced with dark ones.  Still haven't figured out why.  2) Our initial "server" came to explain the menu, but he seemed a bit lost and stumbled frequently.  He also spoke so quietly that none of us could really understand his explanations (even after asking him to speak up).  A few minutes later, another server came to take care of us, and walked us through the menu again, and then stuck with us throughout the night.  We're also still pondering this one.

We chose to do the smaller tasting menu, which gives you options at each point.  We all tried to order something different, which wasn't as hard as I expected- sometimes, we all legitimately wanted different items.  My choice for the first course was the eggplant terrine, beautifully constructed with layers of eggplant, roasted red peppers, and goat cheese.  It was topped with a tiny spoonful of crushed black garlic, which was a foreign flavor to me- still not sure if I'm a fan, as it's rather bitter.  This was a delicious and thankfully light start to my meal. 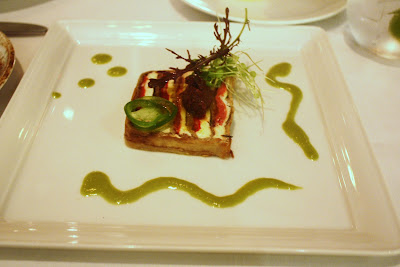 My dad chose to get the beet dish, which I didn't try but just have to comment on one of the menu-listed ingredients for this dish: soil.  Soil?  Somewhere I had read online (perhaps in one of the most recent reviews?) that this simple plate had pumpernickel crumbs, but I still found it odd that this isn't explained whatsoever on the menu.  Quirky- and my dad said it was the best soil he'd ever had, but I can definitely see this creating confusion. 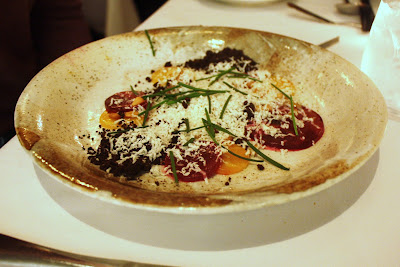 The other two chose the foie gras soup- which I can definitely see becoming a Sbraga staple (many of the menu items change seasonally).  The thick, creamy soup is poured tableside (into an awesome bowl-- we all loved the variety of dishes our food came on) served over an onion and rose petal relish.  For those of you (like us) that don't love the flavor of rosewater, don't be scared-- there isn't even a hint of it here.  Just the rich flavor of pureed duck liver (which I swore I wouldn't eat again anytime soon..). 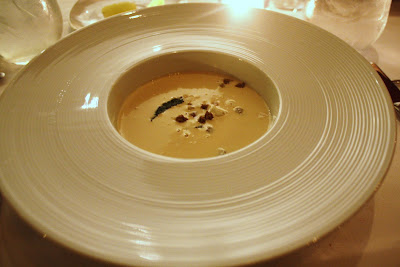 After licking our plates (and bowls) clean, we waited a reasonable amount of time for the second course.  The pacing of the meal was spot on, which was actually one of my favorite parts of the experience, since it gave us time to rest and carry on conversation between courses.  The second course is seafood based, and J immediately laid claim to the "Fish n' Chips" option, a beautiful plate of Indian-spiced cauliflower remoulade serving as a base for a small handful of crispy fries and lightly battered, fried fish (unfortunately, I don't know which species).  I think J wanted to order this as her third course as well.

My dad chose the artic char, a fish similar in texture and flavor to the more common salmon.  While he found the flavors a bit underwhelming, the beauty of this plate is too much not to share- the thick, sweet (pomegranate or beet?) syrup held firm to the plate while the thin celery root puree filled in the spaces. 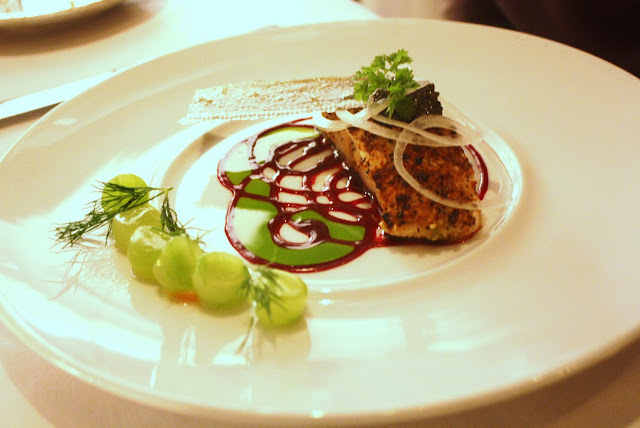 The menu really spans a wide array of flavors from around the world, which is well represented by my fish choice, the black cod served with spiced lentils and a bok choy "chip", as well as a pile of spicy kim chee'd veggies.  The flavors of each part were intense, but complimented each other without competing.  The 2" cube of cod was coated in a tangy, barbecue-like sauce that I couldn't get enough of. 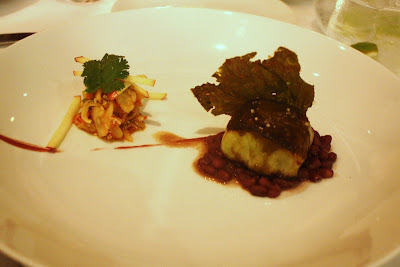 The third course is the meat-based dish (and while there is a vegetarian option, I just.. wouldn't) and my dad ordered the already infamous meatloaf.  Both of the servers who explained the menu to us made a point to emphasize this dish, which was a superb recommendation.  The meatloaf contains zero bread, which maximizes the meatiness.  The tomato-bacon marmalade was like a thick, savory icing to the meat cake.  We all laughed at the mini pile of potatoes (it was like a doll-sized serving), but by the end, I think we were happy not to have huge portions- the richness of the food combined with the multiple courses leaves you stuffed. 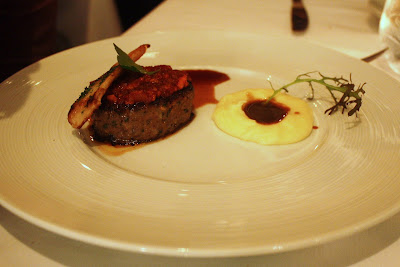 My mom ordered what I consider the most approachable dish on the menu- buffalo chicken.  I had low expectations, but Sbraga delivered on this bar food favorite.  Three pieces of bone-in chicken were fried in a slightly spicy batter- and I won't lie, this is some serious fried chicken.  I'm not sure of Sbraga's background, but he could easily lead a Southern style restaurant, based on this dish alone.  The other components of classic buffalo wings- the sauce, the blue cheese, and the celery and carrots- were all present as well, each in a unique form.  Chunky blue cheese crumbles lay under the chicken- some of the best, smoothest blue cheese I've ever had.  A shaved celery and carrot salad completes the plate, and a tiny bottle of a thin, vinegar-y riff on buffalo sauce accompanied the dish (I think my little trial taste was the only time the bottle was used-- it's unnecessary with the explosion of flavors already present here). 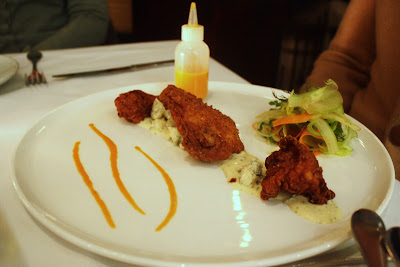 My plate consisted of a breakfast classic- sausage gravy, a soft, flour-y Southern style biscuit (like I was saying...), and a fried egg, all over a bit of potato-artichoke hash.  This is really the breakfast (and lunch, and dinner) of my dreams- perfect for any meal, rich and decadent without being overwhelming. 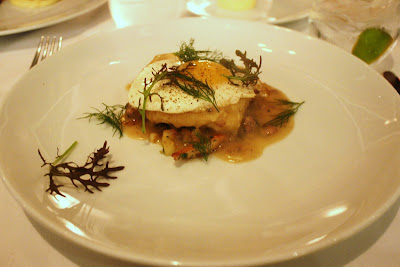 J ordered the double lamb dish, which pairs a piece of fatty lamb belly and a perfectly cooked bone-in lamb chop with a sweet cinnamon spiked oatmeal.  Both pieces of meat were fantastic- there were a few comments that the chop didn't even taste like lamb (only the slightest hint of that earthy, gamey flavor).  The oatmeal base, however, was not the best accompaniment- sweet when we wanted salty.  I'm a master of savory oatmeal breakfasts, so I was particularly turned off- but one wrong turn in a meal full of rights is more than acceptable. 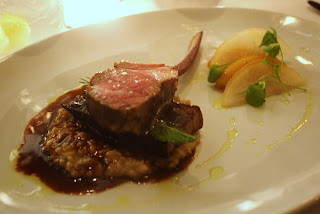 The four course tasting comes with dessert, although we've heard rumor you can skip dessert and leave for just $35 a head.  The desserts are the masterpieces of Sbraga's wife, and while they showcase creativity and use only the best ingredients, there was something missing that we couldn't quite put our finger on.

The highlight for all of us (minus my mom who somehow lacks the coffee-loving gene) was the coffee granita, reminiscent of the refreshment of a deep, dark iced coffee in the dead of summer.  The pairing with the creamy, slightly sweet mascarpone and the bitter dark chocolate was everything you'd want in a dessert.  However, while it was a perfect combination, it comes down to three delicious ingredients- how challenging can that be?

We're glad Sbraga is thriving- for some reason, I'm scared that the Symphony House space might be eternally cursed after Craig LaBan's 0 bell rating of former occupant Chew Man Chu.  Some have noted that the location is only convenient for the theater/Kimmel Center crowd, but it's just a measly three blocks off the central line of Walnut Street.  As for us, we'd love to go back to Sbraga and sit at the counter right off the kitchen- the dining experience further expanded to include entertainment.