The holiday season is in full swing, and it seems like we've been going to a million work/school related Christmas parties.  Some of them are catered, and some are potluck- my favorite!  My lab is quite multi-cultural, so our potluck was a fun opportunity to try some new and different dishes.  Since I was in the middle of prepping for an important meeting, I needed to throw together something quick and easy that would also be a crowd-pleaser- and this recipe fulfilled both of these requirements quite well.

Similar to regular s'mores, you really only need three ingredients to make this seemingly fancy and elaborate three-layer treat: a box of graham crackers, a box of brownie mix, and a bag of mini marshmallows.


Layer 1: The graham cracker.  To fill an 8"x8" pan, crush enough crackers to make a cup and a half of crumbs.  For me, this was a little less than one package (1/3 box) of grahams- though I went the lazy way and crushed them up in a bowl with a meat pounder (not the best idea)- and then fished out the larger pieces toward the end.  Next time, I'll get out my food processor. 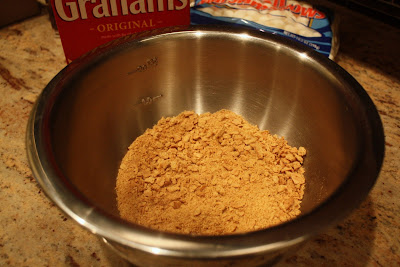 Melt 6 tablespoons of butter and use a dollop to grease a foil-lined pan.  Mix the rest into the crumbs and press the whole lot into the bottom of the greased pan.  Bake for 20 minutes at 350F.


Layer 2: The chocolate. While the first layer is setting up in the oven, mix up the second layer- again I took the path of least resistance and used a mix- a fudgy, dark chocolate Duncan Hines version.  Of course, you could always use your favorite recipe for homemade brownies!  The mix had options for making denser brownies versus cake-y brownies- and because I wanted this to emulate a real s'more- melty and gooey- I went with the dense option, which required one egg, a bit of canola oil and some water- ingredients I always have on hand. 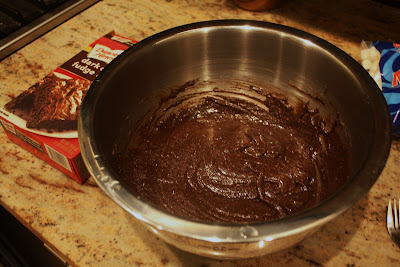 Baking the graham and butter mixture allows it to really compact and form a crispy and sturdy crust.  As soon as the pan came out of the oven, I smoothed the brownie mixture across the top and popped it back into the oven, following the directions on the box for baking time. 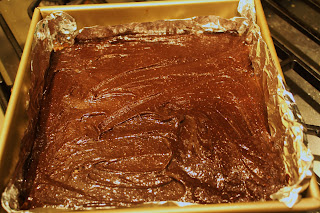 Layer 3: The marshmallow. When my toothpick came out relatively clean (again, going for the gooey factor), I spread a layer of mini marshmallows across the top, fired up my broiler, and positioned the pan under the center of the flames.  You want the marshmallows to puff up and brown a little bit, but if you've ever roasted a marshmallow, you know the process needs to be closely monitored.  I watched the entire time- it took about four minutes to reach my desired marshmallow puff level, but of course this is dependent on how far your pan is from the flame and how powerful your broiler is. 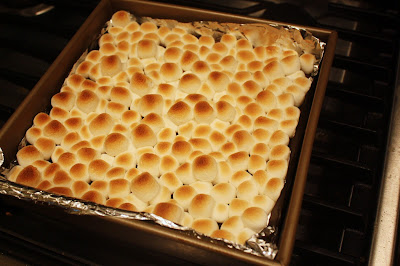 I let the brownies cool completely before I cut them into individual pieces.  I used the edges of the foil to pull the whole square out of the pan and place it on a cutting board.  As I cut, the marshmallows seemed to fuse onto my knife- I recommend wetting or greasing the blade to prevent these sticky guys from latching on. 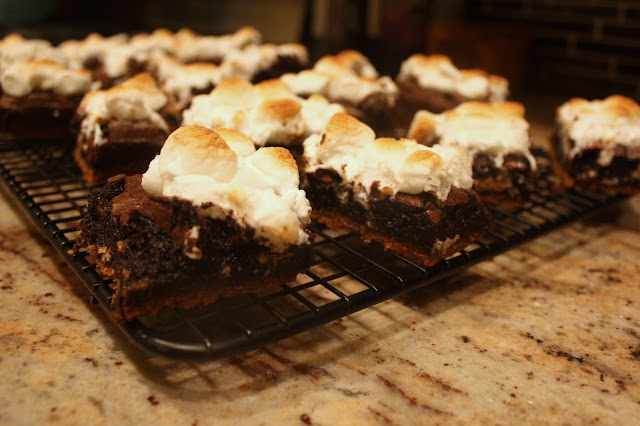 I'm never one to claim something is "too rich" to eat- but for these, you want to keep the size moderate to small.  The buttery crust crunches and gives way to the rich, chocolately brownies and the fluffy toasted 'mallows.  They're not nearly as messy as the real thing and have an extra indulgent density- so satisfying to bite into.  Not quite as fun to make as the fire-roasted version, but a unique and easy treat- perfect for feeding a crowd over the holidays! 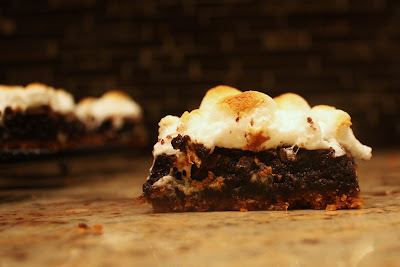