We're not shy about our love for South Philly, especially the bustling corridor of Passyunk Avenue.  Recently the Ave has seen a few new restaurants open up, inviting us for a return visit.  Birra, a new pizza place at Passyunk's intersection with Morris Street, showed a lot of promise thanks to quite a bit of drool-inducing press coverage.

Unfortunately, the restaurant doesn't take reservations.  After our arrival at 7:30 on a busy weekend evening, even more unfortunate was the host's complete lack of hosting skills. Aimlessly wandering around the restaurant to check on diners' progress, giving me a vague estimate of "about thirty minutes," and then blaming a group's "second round of espresso" for our over 75 minute wait is somewhat inexcusable.

The extended wait gave us plenty of time to check out the menu and make some decisions.  One of our friends is lactose intolerant, so the white pizzas were out of the question, but we ended up choosing two red pizzas, three "plates" and a panini to split amongst the four of us.  We skipped over the antipasti section- nothing caught our eye.  Thankfully the pizzas don't take a whole lot of time to make, so they came out first. Obviously we were pretty hungry at this point, so it's no surprise that the first dish we ate was the unanimous favorite- the margherita pizza ($10).

The pizzas seemed larger than the advertised 12", so they were great for sharing.  The simple margherita showcases the crust (thin, crispy, boring) and the sauce (perfect balance of sweet and acidic, well-seasoned to enhance the robust tomato flavor), as well as thin circles of mozzarella and a few pieces of shriveled basil.  Fire-roasted dried tomatoes and a drizzle of olive oil provided the pie with a unique flavor profile.  When I eat pizza, I'm usually excited to get through the middle to the outer crust, but in this case, the sauce is boss. 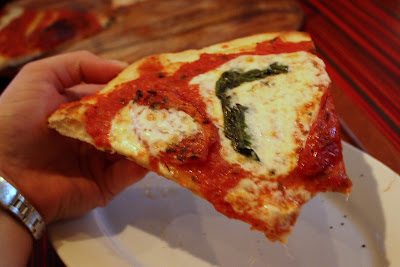 Our second pizza found it's home atop the double-decker pizza stand, and we dug in to our more "interesting" selection- the three little pigs ($18).  Three types of pork- thin capicola, thick cubes of fatty pancetta, and chunks of roasted porchetta- are smothered in mozzarella and topped with a few sprinkles of fresh parsley.  This pizza sounds awesome, right?  Sadly, all I could taste was grease and salt. So much salt. A had to pick off all of the pancetta because it was the worst offender- explosions of chewy salt-cured fat.  My new-found love- Birra's sauce- was completely lost under this mess. 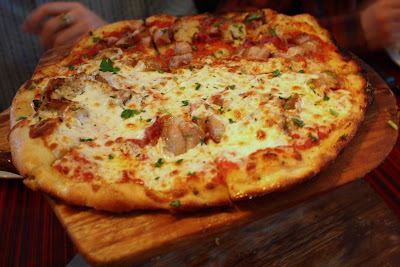 Out next were the meatballs al forno ($11)- three fist-sized balls of beef and veal topped with (not enough of) their sweet and tangy "gravy" and a shave of parmesan.  These 'balls have a velvety smooth texture, melting in your mouth without a hint of breadcrumb glue- just a few very finely chopped onions.  However, we all agreed that the flavor was just sort of... missing.  Perhaps because our tongues had essentially just licked a block of salt?  Quite possible.  A few more herbs or a different combination of cuts of meat might help, but I'm no meatball expert.  Again, a promising dish that fell a little flat.

Nonni's brisket sandwich ($9) was another beast of a plate- two generous chunks of Italian bread spread thin with a pepperoncini jam and stuffed with chopped brisket.  The large amount of slow-cooked meat and bread without much of a buffer made the sandwich a little dry.  Coincidentally, a cute pitcher of jus is served for just such a situation, but a splash of the brown gravy returned us to Salt City.  The bread was good- fluffy and chewy the way I like it- but the sandwich was nothing special. 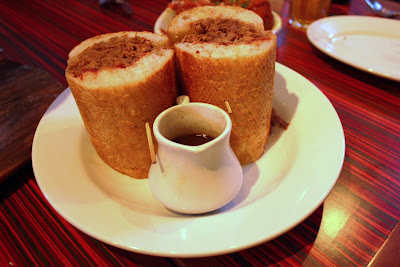 During our long wait, I smelled and saw the mussels ($11) and made a special request for the steaming shellfish.  Again, a very large portion (this restaurant definitely caters to those who like to share). We all had at least 7 or 8 mussels, dipped into the buttery Peroni sauce flavored by garlic, more of those roasted and dried tomatoes, and skinny dried chili peppers. They definitely hit all of the necessities for a great mussel sauce.  More of the delicious bread- this time with a nicely toasted crust- was perfect for dredging through the sauce.  Certainly still on the salty side of the spectrum, but much more balanced by the other components.  A note: curiosity killed the cat- the dried peppers are not meant to be eaten. Our last plate was the lemon oregano chicken- a simple plate of a breast and a leg (skin-on slipping off) served over broccoli rabe.  The host served this plate to us, and somewhat redeemed himself by pointing out  that a piece of the sliced meat had fallen away from the rest- instead of questioning our photography he actually helped out with the food styling!  A and I eagerly gobbled up some of the rapini- the only true vegetables of the evening- and enjoyed the mild bitterness offset by a bit of the lemon-scented jus.  The chicken itself was reminiscent of the meatballs- unbelievably decadent texture, absolutely some of the most well-cooked chicken I've ever tasted.  The lemon flavor was also pervasive down to the bone, maintaining a surprising intensity that was unfortunately a bit one-note.  Oregano needs to play a more prominent role to keep it from being a chicken flavored lemon. 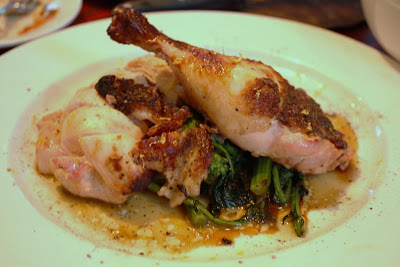 At this point, we were full to the point of bursting- our late-evening hunger levels had us eating everything save for a few slices of the pork pizza.  However, a super salty meal needs a super sweet counterpart, so we decided to split a dessert- always a good way to end dinner.  Only a few options for the evening, we chose a sticky toffee chocolate pudding cake ($8).  Two wedges of crumbly, slightly dry cake were embedded in a thick and sticky pool of caramel and topped with shaved white chocolate and a small, melted pool of vanilla ice cream.  Though the cake itself was pretty bland, I'm a sucker for salted caramel, and Birra delivered- it was like melted butterscotch.  At this point, it was hard to appreciate anything salty, but I still have to acknowledge that the sauce on this is pretty stellar.  Over some plain vanilla ice cream? Yes, please. Hold the cake. 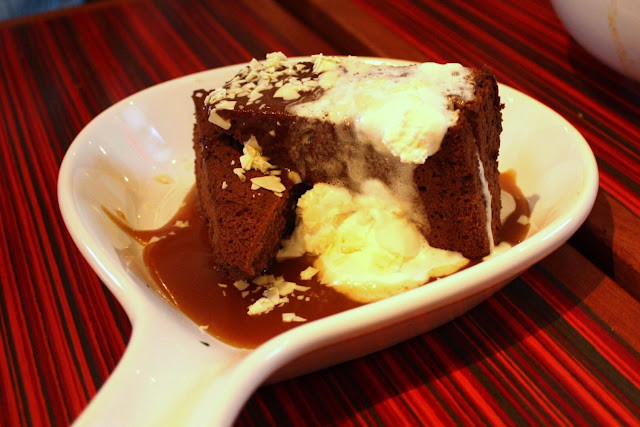 A few days later, I was reminiscing on the meal with one of our friends and we both agreed that (other than the one pizza), there was nothing unpleasant about the meal.  I just felt like I was quickly going from one dish to the next, waiting for something to really excite my tastebuds.  Maybe the fact that the margherita came out first set me up for disappointment, but that's really what this meal was- a long and salty stream of dishes that just weren't as good as I wanted them to be.