There's something about a warm bowl of Thai curry that is absolutely perfect for a cold winter night- and we've definitely had quite a few of those recently.  Rounding out a month of fun dinners with a friend home for the (very long) holidays, we decided to end it on a new-to-all-of-us spot, the relatively recent Circles in South Philly.  Noted as "Contemporary Asian," I would probably call this "Typical Thai," although there are a lot of fun deviations from the norm. 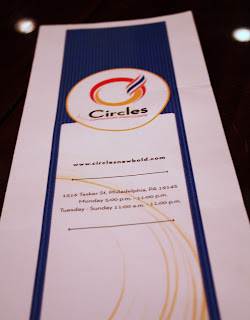 The corner spot is long and narrow, with the majority of the tables clustered near the front.  It sits adjacent to a separate storefront that specializes in the same dishes, just packed up for take-out.  We've heard that the kitchen is shared, with food shuttled in from one store to the next, but we saw no evidence of that.  We made a reservation (couldn't pass up 1000 points on OpenTable), which almost seemed ridiculous for such a casual place, but we'd recommend it.
The service was phenomenal, with two guys running the entire place with ease.  After lots of discussion, we came to an agreement to split a number of apps to start our meal.  J had her eye on the Tofu and Corn Fritters ($6.95), which sounded promising- can't go wrong with anything involving the deep fryer and corn.  However, these little corn cakes surprised me- I expected a breaded texture throughout, but instead we were met with an oozing center of corn and pureed tofu, surrounded by a flash fried, panko-based batter.

The two accompanying sauces were also great- particular the curry tomato compote, a thick sauce with chunks of tomato and a few tiny pieces of crab meat mixed in.  The "citrus aioli" option seemed like a classic sweet chili Thai sauce, good, but a bit too thin to really stick to the cake.  It was also not as good of a flavor match as the acidic tomatoes were for the sweet corn.

J also really wanted to try a salad- Circles has a really nice selection, unlike many Thai restaurants- and settled on the Calamari Salad ($7.95).  Unfortunately, besides the generous portion of grilled calamari (both tentacles and large rings), she felt the salad was far too heavy on the green and red onions.  While they were marinated a bit in the thick, sweet, lime-scented dressing, if you ate this serving as is, you'd have a serious case of onion breath.  A few strips of red pepper helped save the dish, but the advertised-yet-absent mint and cilantro would have been much appreciated as well. 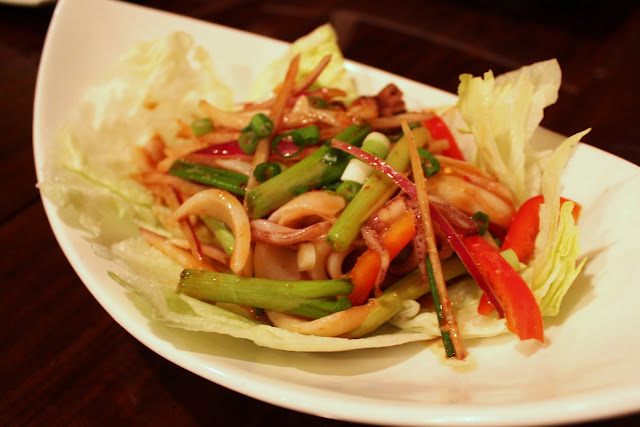 We also chose two Thai classics to share, starting with the Pan Fried Dumplings ($5.95).  A note on portions- these were all great to share with our small group, and we felt they were reasonably priced.  The dumplings had a thick, chewy wrapper, toasted to a crisp on one side, encasing a little lump of spiced ground pork.  A soy based sauce helped liven them up, but I felt like these were too boring.  I was outvoted though, as this was a favorite amongst the other two. 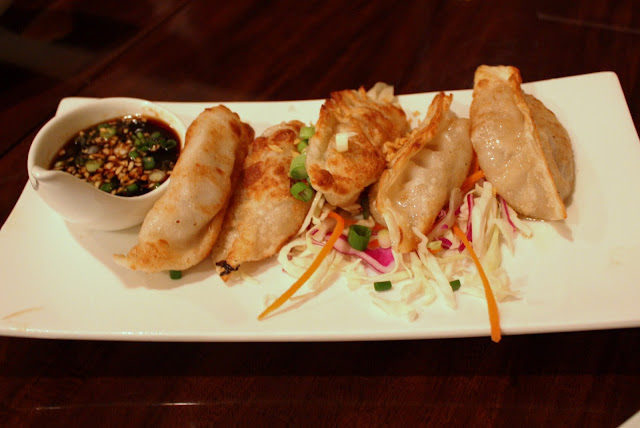 Our second classic was the Spring Rolls ($3.95), a perfectly executed version of the dish we've all probably had a thousand times- chopped veggies and chicken encased in an eggroll-like shell and fried.  They were tasty little treats- and again, great for sharing- as they were each cut in half, serving as little scoops for the sweet and sour sauce.  If you're going for original, we'd recommend the Tofu + Corn Fritters, but if you just want a nicely done piece of Americanized Thai, get the Spring Rolls. 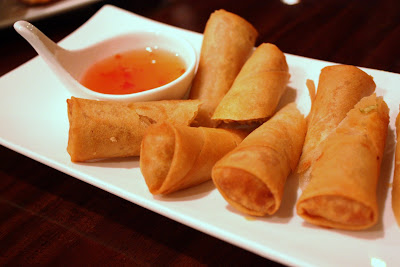 Our friend couldn't start his meal without his favorite Thai soup, the Tom Yum ($3.95).  Richly scented with lemongrass, the soup was more of a broth, flavored with galangal (similar to ginger) and kafir lime, and filled with mushrooms, onion, and chicken.  While flavorful, it could have used a heavier hand with the spice.  A hefty portion for a small price, you could easily order a plate of spring rolls and this huge bowl of soup and walk out satisfied for under $10! 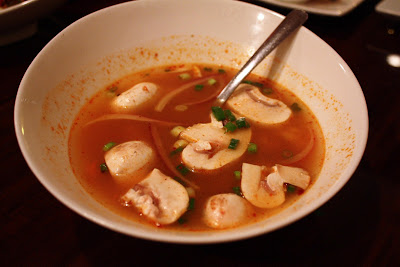 After an appropriate interlude, we were greeted with our entrees- which to me, is where all the excitement lies.  I may have played a role in convincing J to order the Eggplant Stinger, a dish full of sauteed vegetables, and of course, lots of soft eggplant, all stir fried in a dark sweet and spicy sauce.  She added shrimp to her portion, as well as a side of brown rice, for a total of $11.95.  Choose chicken, beef, pork, or tofu, and stick with the free white rice, and again you'll pay under $10- a steal for such quality eats.  Beware, however, of the large quantity of bamboo within- J isn't a huge fan (weird) of the woody vegetable, so she ended up picking around it.  While she asked for a "Medium" spice level, it hardly hit Mild on our spice-o-meter.

The Pad Thai came highly recommended by Yelpers and bloggers alike, so we were happy that our friend decided to order it.  To mix it up a bit, he chose to try one of the Pad Thai "specialties," the Duck Pad Thai ($14.95).  It was served on an enormous platter, making the heap of noodles seem deceptively small, and we immediately wondered at the large pieces of flattened, battered-and-fried.. duck.  What?  Our past experiences with Pad Thai had us under the belief that the protein is incorporated within the dish, not laid scattered on top.  Even so, if the duck had been of the soft, pan-seared variety, it would have been fine.  Instead, each piece was deep-fried to oblivion, leaving just a chewy piece of meat behind.  The rest of the dish was intensely flavorful, and oddly, although also ordered at a "Medium" spice level, had a mind numbing heat (in a good way, but it still represents a lack of consistency).  Certainly the best Pad Thai I've ever tasted, but we all thought a "specialty" should actually live up to its name. 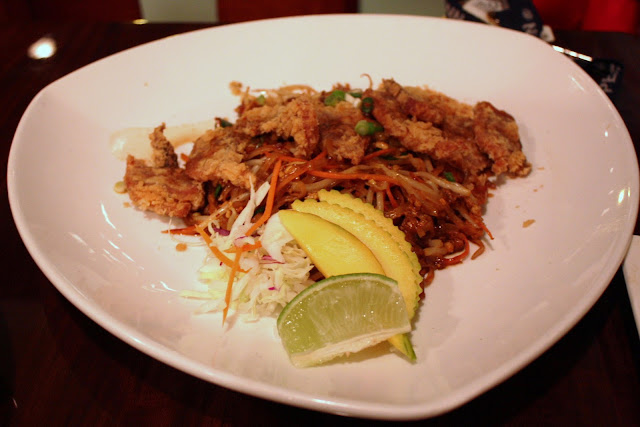 I stuck with my forever-and-ever favorite, the Red Curry.  As always, I ordered it with tofu, but jumped at the chance to have brown rice ($11.95 + $1 charge for the rice).  The sauce was extremely rich and creamy, with a heavy dose of coconut milk, which balanced out the heat from my requested "Spicy!".  The thick triangles of tofu were battered and fried, giving it an extra grip on the sauce with each trip to my mouth.  Lots of sweet basil, bamboo, and barely-blanched green pepper each presented different textures and flavors to prevent any monotony, but even without them, I probably would have wiped up the entire bowl. 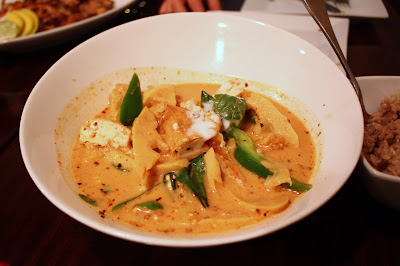 The brown rice seemed to be a multi-grain variety, with a range of sizes and brown hues throughout.  The nutty flavor was lovely on its own, but was easily overwhelmed by the curry broth- fine by me, since I could happily drown in the stuff.  The rice worked better with the eggplant dish, as the thick, sticky sauce could coat each piece while still letting the whole grain flavor and texture shine through. 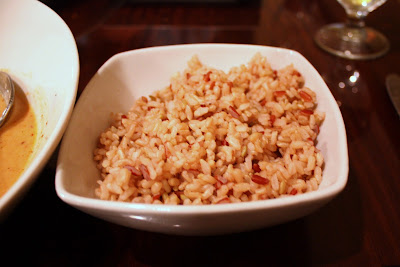 When reminiscing about our meal a few days after, J made the exact same comment that she did regarding our recent trip to Jasmine Rice (another Thai spot in Center City)- while she enjoyed it, she's just not a huge fan of Thai food.  I, on the other hand, am a sucker for the stuff, and can't wait to find a reason to return.  The option to take-out or have the same exact food delivered to my door is also quite tempting!