It's been fun to watch how much Penn has changed since we graduated in 2008- new places to live, new places to eat, and now- with the opening of Penn Park- new places to play.  They've even made it winter-friendly with the addition of "the Bubble"- an enclosed soccer field, free of ice and snow.  A few friends started playing in a soccer league this past weekend so we stopped by to check out the space and half-heartedly follow the game (sorry guys...).

We wanted to grab dinner somewhere between the park and home, but options are rather limited on that stretch of South Street.  Thankfully, we slipped into one of the last tables at Ten Stone, a cute and inviting neighborhood pub complete with pool table and all the current basketball games on TV.

Service was a little spotty- they seemed to be a bit short-staffed- but we were always able to flag down our waitress when we needed her.  We quickly placed an order for something warm- the hot crab dip ($11).  Served with a generous amount of tri-color tortilla chips, the dip comes in a toasty crock pot fresh from under the broiler. 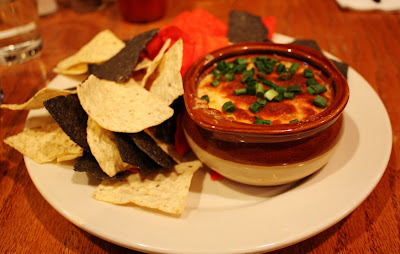 I can't say I'm a huge fan of the browned cheese skin that stretched across the top of the dip, but it encapsulated a cream cheese-based dip that was surprisingly good.  With visible chunks of crab meat, pickled jalapeno peppers, chopped artichokes, and bits of red and green bell peppers, the combination of ingredients really came together to make for a much higher quality appetizer than I was expecting.  It was also incredibly satisfying- a much larger portion than the three of us could finish off. 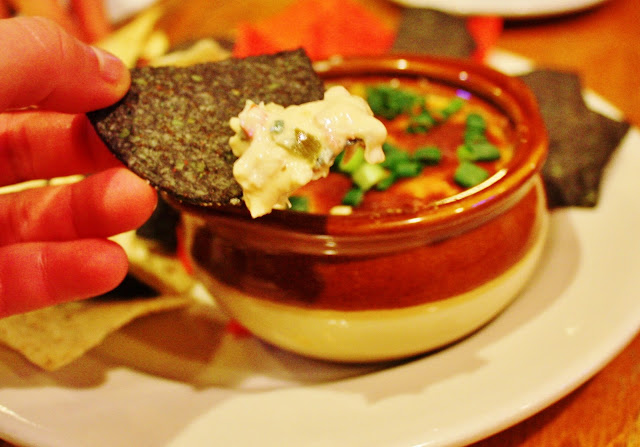 The rest of the casual menu is comprised of mostly salads and sandwiches, so A and I split one of each.  On a previous visit several years ago, A had ordered the grilled ham-and-cheese sandwich ($9).  It's telling that it's still on the menu all this time later- no real effort to make something new, or maybe more of a "if it ain't broke, don't fix it" mentality...  This sandwich leans me toward the latter- a few layers of thinly sliced, salty Virginia ham and tomato are melted underneath a layer of Swiss cheese and sandwiched inside a (thankfully unsalted) soft pretzel.  A thin and super sweet honey mustard glaze smothers the top surface of the sandwich- it might even have been likened to being dipped in a vat of the stuff.  It errs on the side of overwhelming, but in an enjoyable way.

We tried to balance the sandwich out with a salad- choosing the aptly name "Kitchen Sink" salad ($12).  Lots of chopped romaine is tossed with a mix of vegetables- tomato, cucumber, avocado- as well as proteins- hard-boiled egg, pepperoni, and grilled shrimp.  The dressing is listed as a roasted tomato basil ranch, but tasted more like a basic creamy peppercorn.  While the salad did seem to be 90% lettuce, it was plenty to split between the two of us.  A also thought the shrimp should have been served warm, but considering we were eating at a bar (and not a "gastropub"), these complaints didn't prevent us from enjoying the opportunity for some fresh veggies. 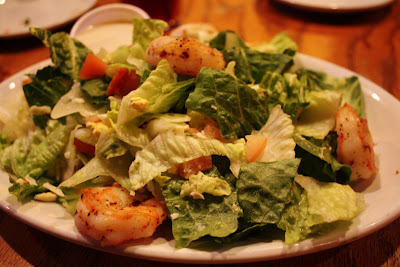 A's fiance had a hard time choosing between the burger and the flank steak panini- we convinced him to go for the latter ($11).  Slices of medium-pink flank steak are partnered with bacon and melted gruyere, pressed between slices of a thick bread that toasted well- soft on the inside but with a crispy crust.  Horseradish mayo adds a spicy undertone to accentuate the juicy steak.  Sandwiches are served with fries (nothing special) or a side salad. 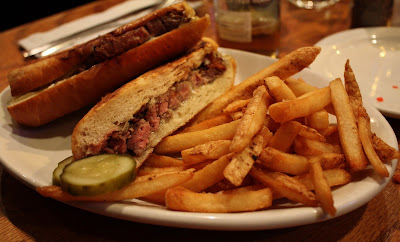 With the growing population of casual restaurants taking bar food up a few notches, it's sort of nice to see a place stick to more of a classic American menu.  However, that doesn't mean this is just a boring place to get wings and burgers- they definitely have some interesting and well-executed options, while maintaining a friendly and very approachable neighborhood atmosphere.