We typically try to avoid Restaurant Week in Center City- not a great deal, rushed service, limited options, and so on.  However, it always happens to fall around our birthday, so we embraced the lunch option and organized a group celebration down in Old City.  Fork is a "New American" restaurant that has been a stable force on Market Street for over ten years.  They preempted the hyper-local/seasonal trend and actually change their menus almost daily to reflect what is available.  This means that even the pre-established RW menu that we'd perused online had a few changes by the time we made it down.

The space is elegant and simple, but we were led down a long, narrow hallway to a private dining room which was a special surprise.  I suppose they thought we might be a loud, obnoxious group- our waitress seemed a little bummed when none of us ordered anything to drink.  The service was excellent- our three courses stretched out for an appropriate two hours and water glasses were consistently refilled.

We all ordered from the pre-set menu which had three appetizer options, four entrees, and one dessert (one!? really?), although the regular brunch menu was also available.  I started with the sweet potato soup- a thick and creamy, slightly sweet puree topped with another dollop of cream and a few bacon sprinkles.  I thought the soup played mostly on its sweet notes but my boyfriend claimed it had an Indian spice component.  Regardless, it was hearty and satisfying. 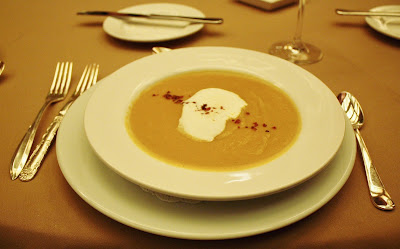 A ordered the salad option- a pickled beet salad complete with huge chunks of multiple beet varietals, turnips, and raw cauliflower and radishes.  Pinches of creamy goat cheese, a sprinkle of arugula, and a flourish of thick golden beet puree decorated the salad.  The beets had a great softened texture which contrasted the crunchy radishes- although the raw vegetables were a bit of a surprise. 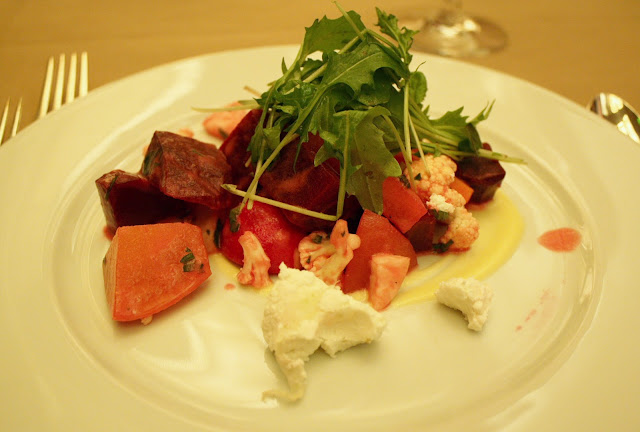 The last option was great for any veggie-phobes in the group- beignets with cranberry compote.  Three airy puffs of fried dough were sprinkled with powdered sugar and embedded in a thick, tart cranberry sauce.  Both the density and the quantity of the compote seemed out of proportion to the fluffy doughnuts- difficult to use as a topping or spread. 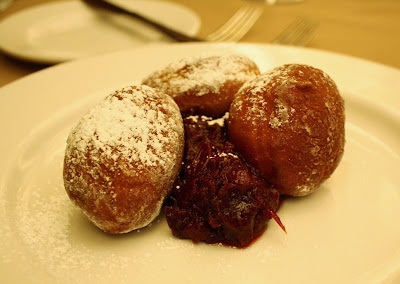 The most popular entree was definitely the short rib sandwich- a thick pile of braised meat pressed in between slices of grilled ciabatta.  Crumbles of blue cheese were optional- I personally thought the flavor of the cheese overpowered the tender beef.  Crisp, salty fries completed the plate- a perfect mid-day dish for the meat and potatoes type. 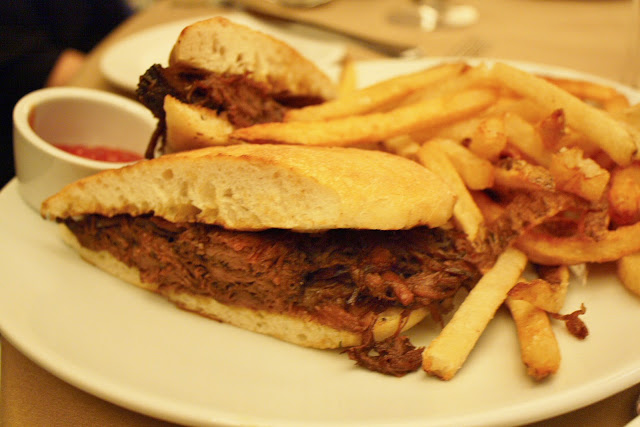 Since so many people were ordering the sandwich, I decided to be a little different and chose the most breakfast-y item on the menu.  A thick patty of egg was folded over pale slices of smoked salmon, a few tendrils of purple onion, and more thick pinches of the most pillowy goat cheese.  Because the eggs were cooked separately, the texture of the omelet was a little bit chewy- I prefer my omelets to have a little more cohesion and incorporation of everything in each bite.  Home fries had a nice crispiness, but for some reason the elegance of the dishes and place settings made them seem a little sad. 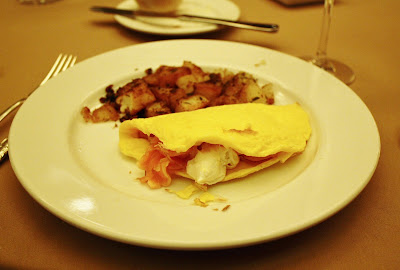 There was also a pumpkin and chestnut risotto topped with pea shoots- a nice change from the typical mushroom risotto offered up for vegetarians.  Apparently the chestnuts were practically nonexistent, but the risotto had a rich, earthy flavor that A likened to roasted corn.  At first sight, the portion seemed a bit meager, but as a lunch entree the lightness was appreciated. 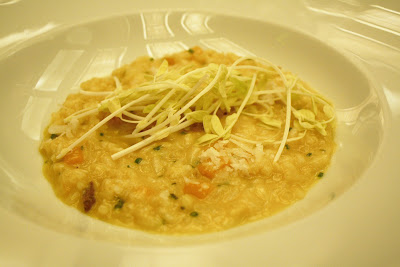 The one option for dessert seemed a little like an afterthought- it  makes sense that they need something easy and quick, but the flourless chocolate cake with vanilla-orange ice cream was sloppily plated.  The ice cream was melted across the plate, pooling around the cube of fudgy cake.  I'm typically anti-chocolate cake (too boring), but the density and thick ganache icing gave the cake a richness that was undeniable.  Conversely, I am a proponent of plain vanilla ice cream, so the melted Creamsicle slush wasn't my favorite. 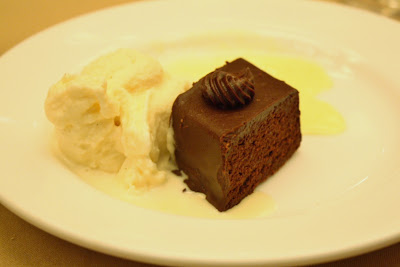 The Restaurant Week aspect of this meal was definitely limiting- I would have ordered a completely different meal had I gone a la carte.  However, the overall experience was fantastic- the personal service of the private dining room made it feel much more celebratory.  Everyone seemed pleased with the meal and it essentially worked out to everyone getting a free dessert thanks to the $20 prix fixe format.  I'd love to make it back for dinner- the location, menu, and atmosphere make it seem like a prime date spot!