One day, many months ago, some friends and I began plotting a visit to a mysterious, rumored restaurant-to-be that would serve us top-notch donuts, fried chicken, and quality coffee- three of our everyone's favorite foods.  After months of waiting, Federal Donuts finally opened.  While trying to decide when to get down to 2nd and Federal, the truth started coming out- the restaurant sold out of everything.  Every day.  Often by 1PM.  I won't lie- my desire to go slowly waned and I became somewhat bitter about it all.  Why would you wave this in my face and then make it impossible to get?

Slowly, slowly, the restaurant became ever so slightly less busy (although some days are just as bad as opening week), and a friend and I decided to tempt fate and try our luck during the holiday week. 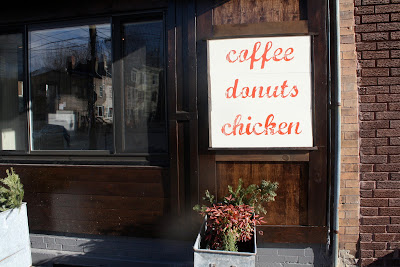 We walked through the doors at 12:15 and a very polite stranger gave us a necessary clue- get a number.  60 orders of chicken, every day, no more, no less, so you better get a number to claim yours.  The tiny storefront was packed but I managed to weave my way up and get two numbers (one for me, one for him).. which just so happened to be #59 and #60.  The last two orders.  Thank you, God. 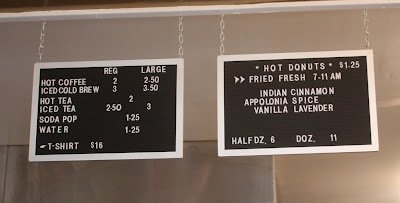 As we waited for our number to be called, we discussed the menu and what we would get.  Federal Donuts literally only sells three things: donuts, coffee, and fried chicken.  No sides, no specials, nothing else.  But honestly, what else can you want?  Since the place opens at 7AM (for the coffee + donuts crowd), they're often sold out of "Fancy Donuts" by lunchtime.  Even though they listed six varieties for the day, they only had one available for us- Chocolate Spicy Peanut ($2). 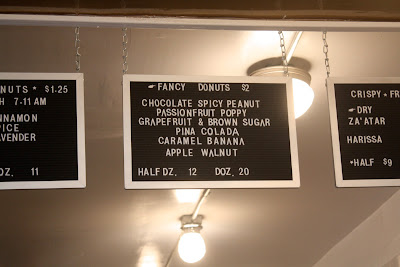 The ordering process is a bit odd, but also logical.  All of the fried chicken (four pieces per order) begins preparation the day before, with some sort of brine/soak.  At midnight, an unfortunate employee comes in to begin the chicken's first dip in the deep fryer, for a long poach at a low temperature.  The chicken is then dried on racks, to await the witching hour-- or, 11:45AM, when chicken orders begin.

When your number is called, you still have a good amount of time before you actually get to eat.  I'd definitely recommend coming hungry, but not hangry, since the total time from entrance to food can be about an hour.  The lovely staff (literally, the cashier Blake was our BFF by the time we left!) takes your order and 1) your donuts are either bagged (Fancy) or fried (Hot), 2) your coffee is poured, 3) your chicken is plucked off the drying rack and back into the fryer, for a short fry at high heat.

Since we were the last order of the day, we snagged two of the six counter seats as the rest of the storefront slowly emptied out.  Our first bite was our Fancy donut, since it needed no further prep.  I know I can eat a lot, but just a note- the two of us split all of these.  I simply ordered one of every donut available, which (thankfully?) was only four.  The Chocolate Spicy Peanut converted us to Federal Donuts worshippers fans immediately.  A soft cake donut (the base of all their donuts, I think?) was coated in a thick chocolate ganache and sprinkled with a peanut powder (with very little spice that I noticed). 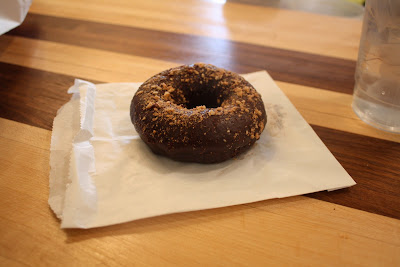 The donut within was sublime- soft, fluffy, not dry in the least.  The flavor was sweeter than anything I'd want to eat for breakfast, but perfect for a mid-day snack.  After a few minutes, our hot donuts arrived, freshly made to order by the fun donut machine in the back.  Each donut is tossed in it's respective coating, but the underlying flavor of the donuts remained the same.  If you're looking for a lot of flavor variety here, you won't find it, but you also won't mind, since they'll still be the best donuts you've ever eaten.

After long last, our chicken orders were finished- leaving just us and one couple eating at the counter.  The employees began wrapping things up, handing us free leftover donuts and making us extremely happy that our timing worked out so well (last chicken = no crowds, counter seating, free stuff, chats with the staff).  The chicken comes with four pieces- usually a drumstick, a thigh, a breast, and a ... ?  The wings are reserved for Sunday Wingday, so I'm not sure.  However, we were told ahead of time that we might get two thighs instead of a drumstick-- more chicken? No problem.

There are two different preparation styles, dry and wet, both of which have two flavor options.  I chose the dry "Harissa," and my friend chose the wet "Chile Garlic" flavor.  The dry chicken has a hefty, crispy outer layer, exuding just enough grease for extra flavor.  The pieces are sprinkled with a spice concoction (hence, harissa) that gives it a salty, spicy flavor- harissa traditionally includes red chili peppers, garlic, coriander, cumin, and caraway.  Each piece was different, offering white or dark meat in varying thicknesses, giving it a little variety as I ate through the basket.  The thick skin was stuck fast to the juicy, underlying meat, making each bite a mix of crunch and meat.  It's perfect. 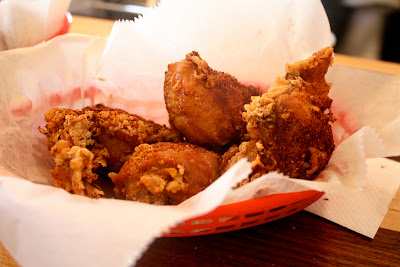 The half order is actually pretty hefty- if you're not that hungry, or don't want to eat such a gut-busting meal, I'd suggest sharing.  I used my "I ran 10 miles today," excuse and plowed through the entire thing- and was full for the rest of the day. 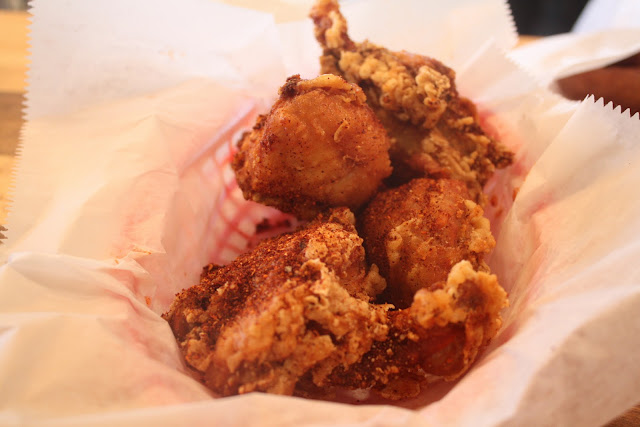 I also traded one of my thighs for one of the chili-garlic, which was surprisingly different than my own dry version.  The heavy dose of sauce changes the texture of the skin, making it more like that of a buffalo wing- less crispy and more dense.  The chili gave it good heat, but not in a "I need milk" kind of way.  Next time I go, I'll definitely have to find someone to split two orders with again- one of each sauce style- as now that I've tasted both, I can't imagine not having both! 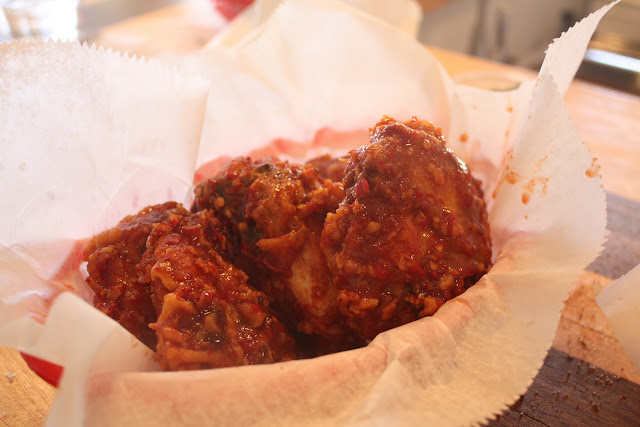 For the measly price of $9 for an entire half chicken, you're also rewarded with two "sides" - some spicy Japanese-style pickles and a small, plain honey donut.  The pickles were delicious, if not a bit random, but I love pickles so bring them on.  Tangy, sweet and spicy, I almost wish they were slightly more abundant, but with all this food, I doubt I could have fit any more in. 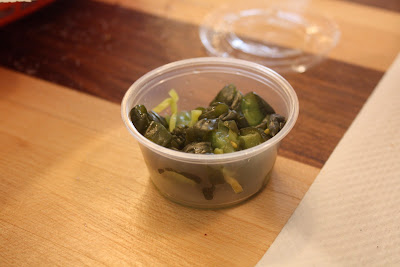 Since I was rather donutted out, I saved my donut for later- apparently you can keep them for a day or so before they get stale.  Nice to know, though, if you come in for chicken later in the day and they are completely out of other varieties, you'll at least get a token one with your order (and if you happen to be the last in the store, they'll probably push some more on you). 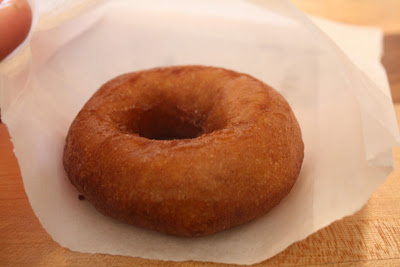 I also managed to score a free coffee, which I highly recommend getting (even if you have to pay the small price of $2 for it)- it's some of the best in the city.  On our way out the door, we were sad to see the handmade written-on-a-paper-bag sign, announcing what nobody wants to see.  However, we were quite thankful that we finally made it down to the hugely popular spot, and will definitely return in the future-- with our crowd-fighting faces on. 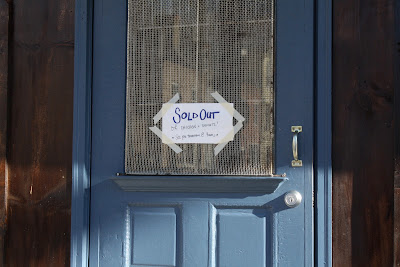 Federal Donuts
1219 S. 2nd Street
Note: Keep an eye on their Twitter feed the day you go-- announcements about availability are timely!
Posted by A and J at 6:22 PM