My visit to Alla Spina on a Monday evening, a mere week after opening, was definitely out of the ordinary. I don't typically go out to eat during the week, I don't frequent restaurants on North Broad, and anything with Marc Vetri's name on it is usually out of my price range.  But a friend was in town, and Alla Spina was at the top of his list, so what was a girl to do? Of course I decided to tag along.

The space is in a complex alongside Starr's new seafood place, Route 6, a block or so north of Spring Garden on Broad Street.  Giant glass garage doors line the front wall, and the decor is a sort of funky/rustic combination.  Lots of wood paneling and chalkboard menus- nice and casual.

Our waiter was incredibly attentive, and it seemed like hoards of waitstaff were hovering around the edges of the room, waiting for a task to complete.  In this sense, it reminded me of Amis- a little too overbearing.  However, the menu is pretty barebones in its descriptions, so our waiter was helpful in describing flavor profiles and cooking techniques.   He also paced our meal appropriately- waiting to bring out dishes when he saw we were still working on others.

We started out with an order of the lamb speck off of the salumi menu (all $8).  Four or five curls of gorgeous, thinly sliced proscuitto-like meat gave off plenty of smoky, salty flavor.  Vetri is well known for his charcuterie, and he continues to excel in this regard at Alla Spina.  The speck was served with horseradish butter, which seemed like an odd pairing.  The butter was whipped and unsalted, giving it a cream cheese-like flavor and consistency.  I'm that weirdo that actually enjoys eating butter, but I'm not sure the average person would be able to consume this quantity with the few small sticks of "rye beer bread" toasts. 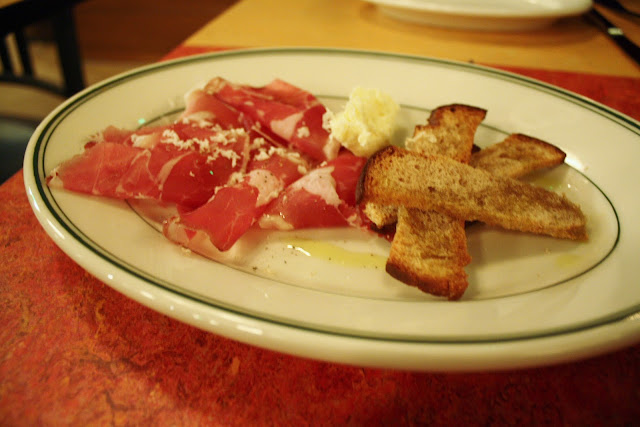 The menu also has a section called "sfizi" (cravings in English)- essentially a list of small bites like deviled eggs and pickles.  I was curious about the schisola- polenta stuffed with tallegio cheese and topped with fried sage ($4).  I'm currently on a sage kick, so I was pleased to find that the flavor seemed to be present throughout the cornmeal- maybe infused into the pool of oil they were sitting in?  Regardless, the crispy fried shell and the melted cheese within complemented each other well. Simple, but delicious. 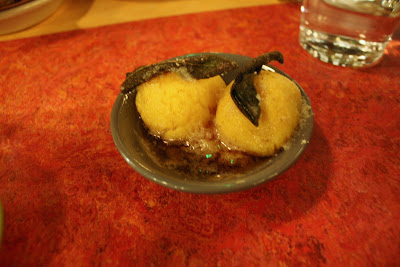 My friend requested an order of the beef fat french fries ($5), a hearty serving of fried potatoes supplied in a paper-lined cone wedged into a pint glass.  The color of the fries were light and they were incredibly limp, making it difficult to dip them into the side dish of plain ketchup and plain mayo (boring).  In terms of flavor, they had a richness that could easily be attributed to their swim in hot beef fat- a bit of salt and smoke and an essence of roast beef drippings.  However, we just couldn't get past the sogginess- I'm not sure if beef fat has a lower smoke point or if there was an issue in the kitchen, but they need to crank up the heat on that oil if they want any semblance of crispiness. 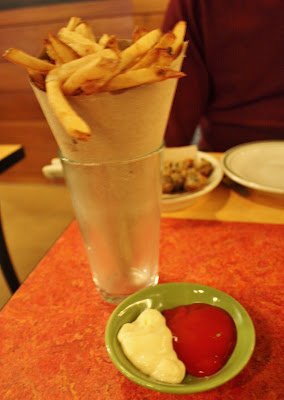 We had a hard time choosing between pig tails and pig sticks, but after getting a detailed description from our waiter, opted for the tails ($8).  Chunks of pig tails are cooked chicken wing style, tossed in a sweet and sour sauce, and topped with a few sprigs of fennel.  The bits of meat that peeled off of the vertebrae were extra crispy and tasted a bit like a sweet orange marmalade.  I liked the little pieces that had fallen off and cooked separately, getting an all over crunchiness- like a crispy little meat chip. 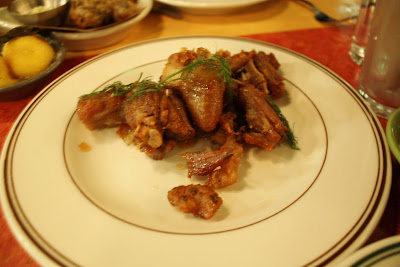 My friend ordered the fried snails, which top the fritti portion of the menu at $16.  The snails themselves were enormous, puffed from their own trip into the fryer.  The breading was a thin tempura style, presumably to let the snails speak for themselves.  Unfortunately, they seemed to soak up as much grease as possible, each exuding a mouthful of stale oil.  The accompanying garlic and parsley tartar sauce was almost as flavorless, contributing nothing.  Definitely the low point of our meal. 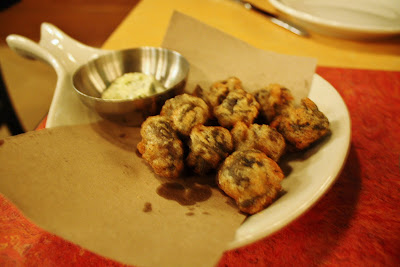 I made a last minute switch to the fried chicken for my "entree" ($16), though I asked if I could replace the accompanying fries for something a bit lighter, seeing as we had placed a separate order of them.  Though I was served another heaping pile of the same soggy potatoes, I was also provided with a large plate of greens tossed with a light lemony olive oil and a sprinkle of salt.  Nothing fancy, but a nice gesture from the kitchen.  The fried chicken itself played a starring role for the meal- meaty little chunks of chicken (minimal bone, Meritage style) encased in a crispy skin lightly coated in a subtle maple glaze.  The meat underneath was perfectly cooked, soft and juicy, a pure white down to the bone.

The other "entree" at our table was from the pasta portion of the menu- the crespelle della Mama Pina ($16).  A thin crepe is stuffed with proscuitto and ricotta, smothered in cheese and a tomato bechamel and baked to a crisp.  The dish certainly wasn't eye-catching (and impossible to photograph..) but the cheesy bite that I consumed had flavors reminiscent of a hearty lasagna, sans pasta.  It sort of encompassed the heavy comfort food (read: heart attack) that makes up the majority of the menu. 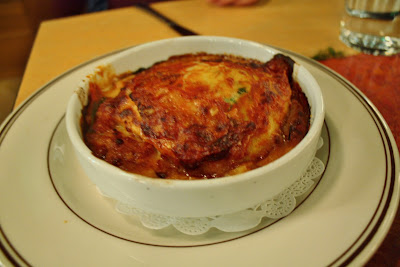 My dining companion and I discussed our meal at length, and both came to the conclusion that it was disappointing. The media certainly made it appear that Vetri has been working on this menu for quite some time, researching gastropubs and fine-tuning recipes.  To that regard, I would expect more of a "wow factor"- and that just never happened for us.  I think the beverage aspect of the restaurant is getting more attention than the food (considering Alla Spina means "on tap"), so I can only hope that over time the menu will sort itself out.