I happen to love French food.  Pates, crusty baguettes, cheese after creamy cheese, lots of butter... sign me up.    Bibou currently holds the top position on my list, but we made plans to give Bistrot La Minette a try.  Tucked off of South Street, the unassuming restaurant has more of a relaxed, shabby-chic cafe vibe than the "Country French" Bibou.  Dining mid-week, it was quiet throughout our meal. Our waitress, though attentive, seemed a little taken-aback whenever we asked a question about the menu.

Along with bread service, we were surprised by a little amuse bouche of a crispy chip (thin, toasted slice of baguette) topped with a blob of a duck rillette- essentially a shredded duck confit.  Lots of flavor- most recipes call for plenty of duck fat- and a good way to acclimate our mouths to the heavier French cooking style. 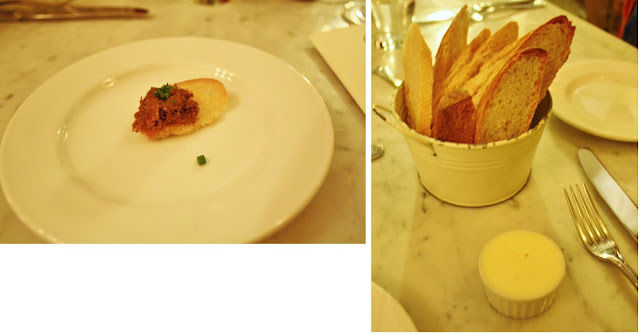 We  front-loaded our meal with entrees (French for first course), trying five of the ten options (no, it was not just the two of us..).  Of course we had to try the classic escargots- nine fat snails served in an herbed butter sauce within individual non-slip ceramic pots.  The serving of nine ($12) split perfectly between the three of us- we loved how each snail had its own pool of sauce and its own little buttery crouton. The snails themselves were slightly chewy with a mineral undertone- perhaps a bit of an acquired taste. 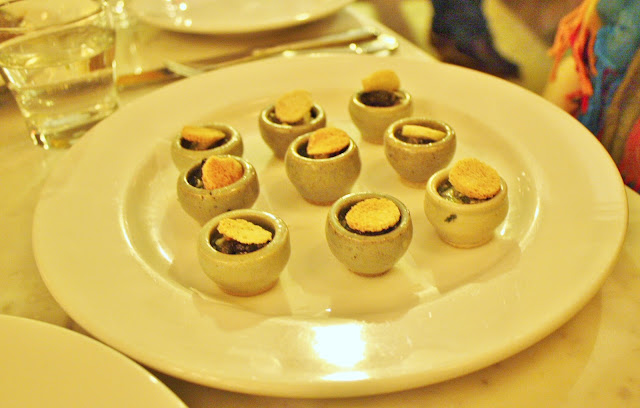 The table favorite was the grilled sardines- four large fillets of fresh fish, skin on, paired with intensely flavorful roasted red pepper "fillets."  The similarity in texture of the two ingredients alongside their sweet and salty flavor contrast made for a very unique experience. I don't know what it is, but red peppers + sardines = incredible. 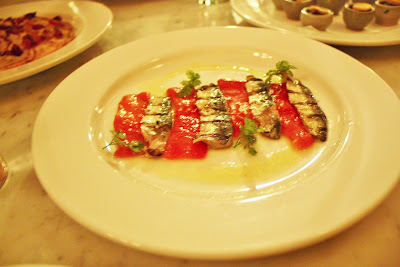 I requested that we order the Flammekeuche- the French version of pizza ($10).  A dense, chewy flatbread type crust served as a salty base- a bit crispy, quite different from the typical "Italian" style pizza.  The crust is topped with creme fraiche, thick cut chopped bacon, and caramelized onion.  There also seemed to be another type of shredded cheese that provided a more standard stretchy, meltedness to the surface.  The disc was cut into strips, flatbread style, keeping the potentially overwhelmingly salty ingredients to a manageable quantity.  Interestingly, the bits of bacon didn't exude the expected levels of salty grease, again keeping that critical balance of savory flavors in check. 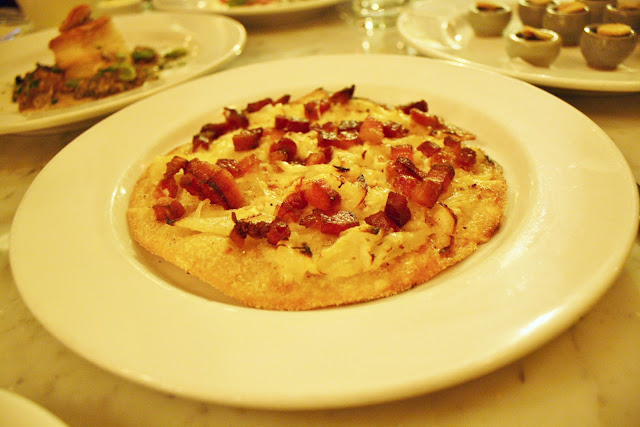 The last dish in the first round was the Bouchees a la Reine aux Champignons Sauvages- translated into "puff pastry with wild mushrooms" ($13).  A very light twist of airy croissant is filled with slow-cooked mushrooms in a rich, earthy cream sauce.  Additional mushrooms form a moat around the pastry castle, including a few big chunks of honeycombed morel- such a unique texture!  Fava beans give a little bit of color to an otherwise drab dish, but don't provide much otherwise. 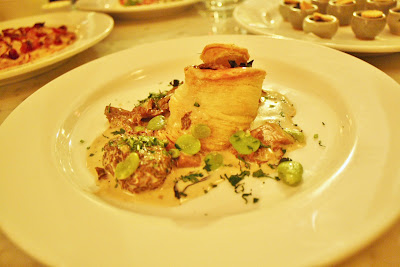 A opted to try another first course as her "Plats Principaux" (main course)- the potage parmentier, a pureed winter root vegetable soup ($11).  The soup itself had a mild flavor, primarily potato and cream based. On top, a sprinkle of fresh chives, a drizzle of truffle oil and a few dried chanterelle mushrooms added a bit of texture and a depth to the flavor profile.  A complained about the mushrooms- they were a little on the gritty side which, along with their dehydration, emphasized the "dirty" aspect.  Not really what she was hoping for. 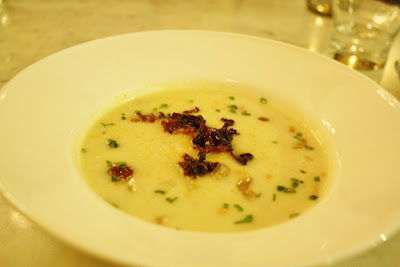 The rest of the menu includes plenty of French classics, and I stuck to a very familiar one- the Cassoulet Toulousain ($26).  The base of the dish was a leg of lamb that was overflowing from the earthenware bowl it was served in.  White beans, tomatoes, and other bits of meat including duck confit and a slightly spicy sausage filled the crevices around the lamb. Crunchy bread crumbs soaked in duck fat cover the top surface.  While the lamb itself was incredibly tender, the result of a long and slow braise, the rest of the flavors didn't come together as well as I expected.  There was an inherent meaty richness that was missing from the broth, as if the ingredients were all cooked separately and then mixed together at the last minute. 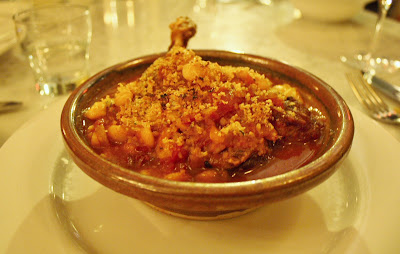 I split the cassoulet with our friend in return for some of his Daurade Poelee ($25), a much lighter fish dish highlighting flaky white porgy (otherwise known as bream).  The fillet was thin, but large enough to cover a generous pile of basmati rice packed with chunks of cauliflower. A shallow pool of sherry cream sauce soaked into the saffron-tinted rice.  A great counterpoint to the cassoulet- I'm glad to know the French do know a few things about "cooking light(er)." 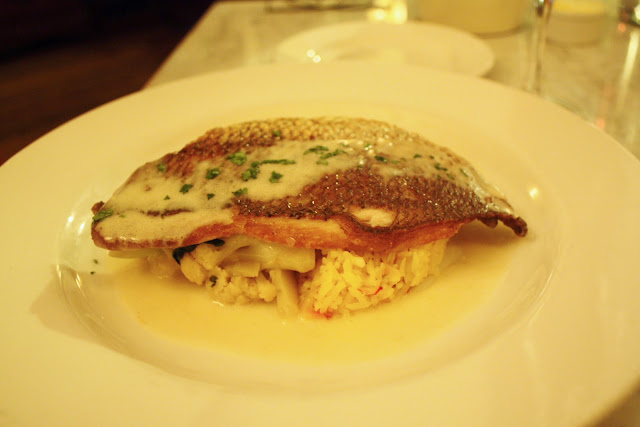 We asked our waitress for her opinion on dessert- something I typically try to avoid doing- but her recommendation of the mille feuille aux framboises ($8) was spot on. Three layers of crispy caramelized puff pastry sandwiched beautifully piped pastry cream with a hint of vanilla and minimal sweetness. A few gorgeous tart red raspberries complimented the "not too sweet" concept, though a pool of concentrated raspberry syrup was available for those who wanted to up the ante.  It was a little bit difficult to cut through the dessert without destroying its structural integrity, but this became a little less of an issue once we realized how darn delicious it was. 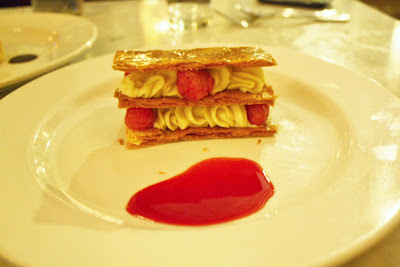 I'm not sure how I avoided the one chocolate dessert on the menu, but we agreed to also try the tarte au citron ($8).  An incredibly dense disc of lemon custard, almost like a cheesecake, continued the sweet/tart theme of our desserts.  The scoop of cassis sorbet was intense- cassis is made from black currants, but the flavor was similar to cranberry- again, another sour aspect.  The balance of sweet wasn't quite as well-equilibrated as in the mille feuille, but the touch of dark chocolate sauce was a surprisingly nice companion. 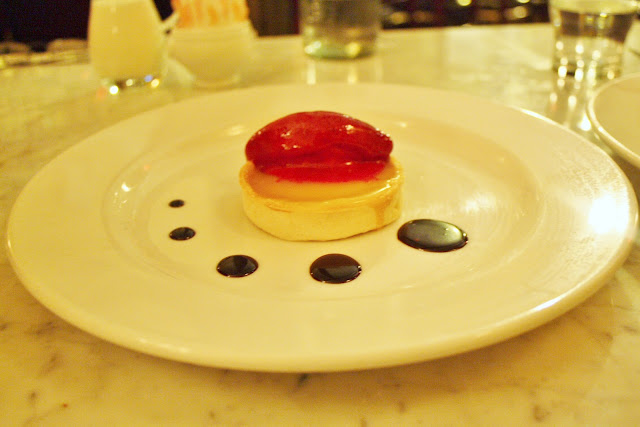 Our dinner wrapped up with a simple chocolate truffle- a smooth chocolate shell covering a bite of fudgy ganache.  A nice touch (and satisfied my chocolate addiction) to conclude the meal. 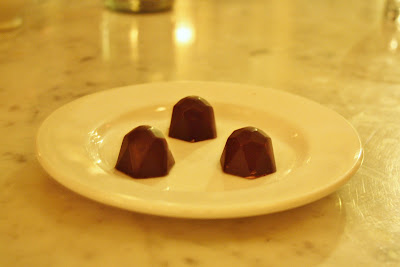 We all left raving about our dining experience- it certainly exceeded our expectations.  A doesn't really love French cuisine, but she thought the quiet cafe was cute and couldn't argue that almost all of the dishes were incredibly well-executed.  Our meal was 30% off thanks to Savored, making it quite afforable (even "dangerously" affordable to our friend, who wanted to order the foie gras dish after we had finished the meal).  I didn't get the "special occasion" vibe like I did at Bibou, but as an everyday neighborhood bistro, I highly recommend it!