Liver was not something we grew up eating.  My parents were both scarred by it in their childhoods, and their stories had us steering clear for years.  However, we're generally adventurous eaters, so at some point we ordered "patè" at a restaurant without actually really knowing what it was.  I was pleasantly surprised by the buttery, meaty paste that was easily spreadable across crispy toast.  Perhaps the beginning of my love affair with French food?

We were recently invited to a friend's new (and beautiful) house in the suburbs, and offered to bring over a few dishes to contribute to a multi-course dinner.  Poking around the internet led me to this recipe from the blog meandering eats.  The directions sounded doable, the ingredients list seemed reasonable, and it would be easy to make ahead the night before.  First up- where does one actually buy chicken livers? Well, I can't actually answer that question, because the first place I looked had them in stock.  Whole Foods sells 'em in one-pound tubs.

They look and feel about how you might expect- pretty disgusting.  However, the rest of the ingredients had me convinced that the end product would be nothing less than superb.  I started out by melting 1/3 of a stick of butter in a large pan and cooking two strips of bacon alongside (in place of the guanciale).  Cooking bacon in butter seemed incredibly absurd. 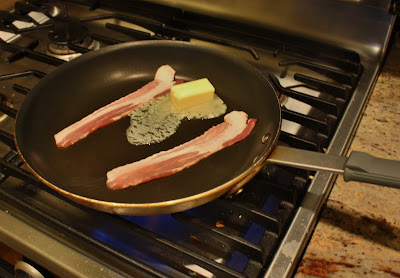 I finely chopped up one large shallot and added that to the pan, pulling out the bacon as it was reaching crispy status.  After about five minutes, when the shallots became translucent, I added one clove of garlic. 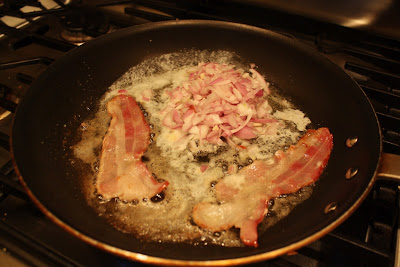 The recipe calls for the livers to be "trimmed," but I had no idea what this meant, so I just added the livers as is.  Half the tub went into the pan, along with half of a Gala apple and a few stems worth of fresh thyme.  I also chopped up my bacon and threw that back in the pan towards the end.  Since the livers were whole, it took awhile for them to cook through, so I let everything saute for quite awhile (at least fifteen minutes), cooking down and softening everything as much as possible.  It wasn't all that pretty- and also didn't seem like a very large quantity of food. The livers also started looking a lot like cooked mushrooms. Weird. 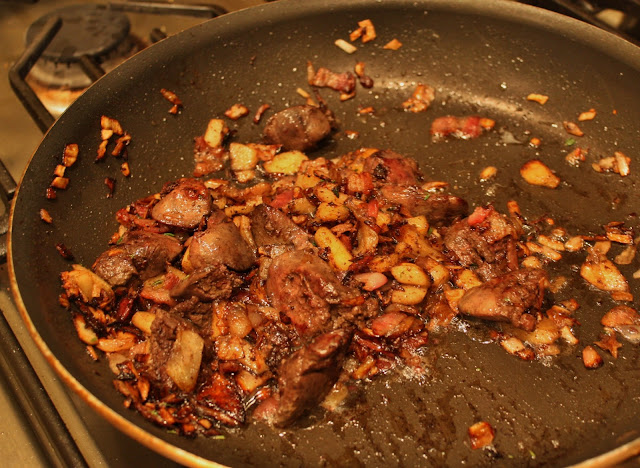 I allowed the whole mess to cool a bit while I set up my food processor.  Into the processor went the liver concoction, a chopped hard-boiled egg, 1/2 teaspoon of salt, and a splash of water.  The recipe called for a bit of sherry, but I couldn't come up with anything decent to replace it with and figured it might need a little liquid. 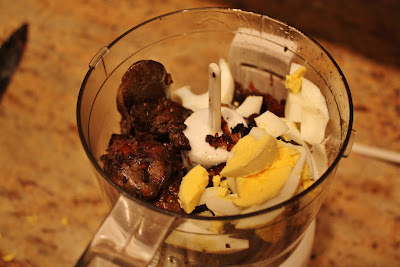 The mixture was still pretty thick, but I allowed it to blend for awhile till it took on a smoother consistency.  In order to really get a nice texture, the mixture needs to be sieved- or in my case, smushed through a mesh strainer.  I used a spatula to press the pate through the strainer, reminding me of those Play-Doh hair toys.  Every so often, I would scrape the sieved mixture into a new bowl and then add more from the food processor into the strainer. 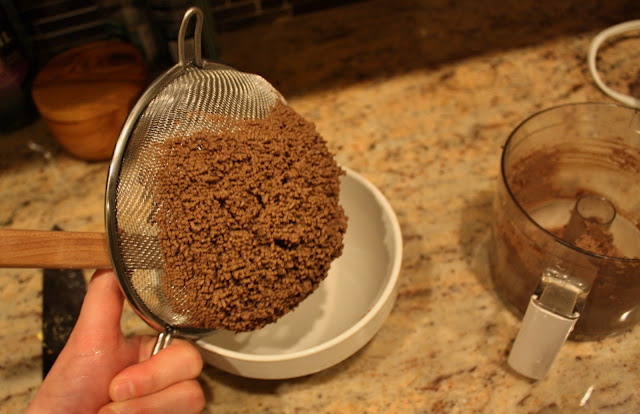 I'm glad I decided to experiment with the sieving (I toyed with the idea of skipping that step) because I was left with a strainer full of little crispy bits of shallot and bacon that had evaded the blades of my food processor.  I chopped another 1/3 stick of room temperature butter and worked it into the sieved mixture, enhancing the incredibly creamy texture.  I transferred the whole mess (which still didn't seem like all that much) into a small glass bowl and garnished with a sprig of thyme.  Covered it and stashed it in the fridge to chill.

I'm not going to lie... it looked a lot like a bowl of cat food.  However, after letting it warm back up to room temp and whipping a bit up to spread on a piece of toasted baguette... the depth of flavor was unbelievable. Salty balanced by a subtle sweetness from the apple, with an almost nutty, bold flavor from the livers.  Of course almost an entire stick of butter and a couple slices of bacon don't hurt either.  And the small bowl went a long way- the intensity of it meant you only needed a thin smear to get the full effect.  Now the real question is... what should I do with the other half pound of livers that are now stashed in my freezer? 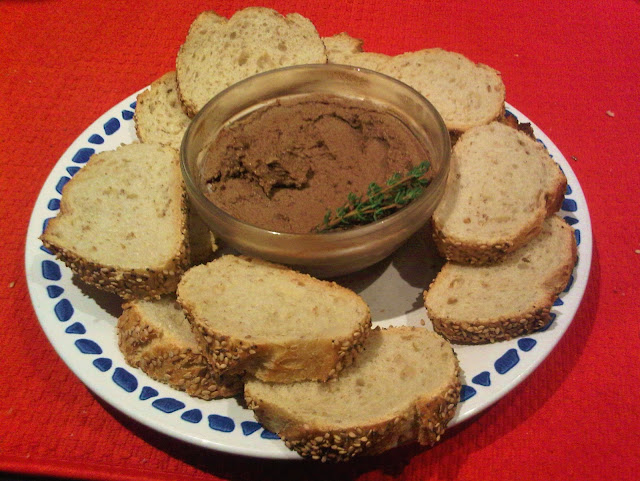